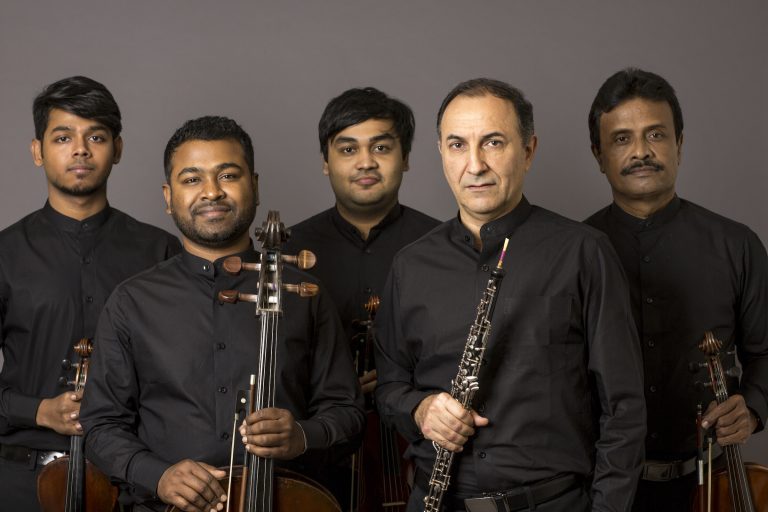 The nascent Effem Ensemble made its debut at Calcutta on 8 December 2019. By virtue of Founder Sponsor Varun Thapar’s refreshing enthusiasm and Founder Director Fauzia Marikar’s methodical coordination, it premiered at a musical soiree at Mr. Thapar’s elegant residence where he graciously welcomed each invitee. Also instrumental in the success of this concert were gifted pianist and violinist Pallab Pramanick, Cellist Somnath Makhal, Violist Subroto Pramanick, Violinist Srijan Mookherjee and Oboist Vachegan Tadevosyan who all blossomed under Mrs. Marikar’s 4-month guidance.

In an evening of chamber music that spanned three millennia, the concert opened with G.F. Handel’s Trio Sonata in B Minor for violin, violin cello, ‘basso continuo’ and flute but transcribed by oboist Vachegan Tadevosyan for the oboe that cleverly retained the delicate resonance of the original. The “trio” Sonata actually involves four instruments of which two solo instruments work melodically with a third component while the basso continuo accompaniment was provided on a synthesizer by the intrepid Pallab with great cembalo effect.

Through alternating fast and slow movements – andante and allegro – of this four movement sonata the ensemble brought a freshness and youthful energy to it with good intonation and a keen sense of tempo and phrasing.

W.A. Mozart’s Quartet for oboe, violin, Viola and cello in F Major composed for virtuoso oboist Friedrich Ramm of the Mannheim court orchestra in 1781 was featured next. Leader rather than soloist, the oboist led the cheerful theme as the ensemble’s string players performed imitative passages and alternated as leaders – all who played in happy unison.

The next two pieces were probably performed for the first time in Calcutta at a public venue. Kedarnath Awati, a former pupil of Fauzia Marikar, composed March in the ‘Olde Style’ for an overseas competition that won him first prize and many fans. The musicians were free to make their own interpretations that resulted in a pleasant performance. The cadenza was the oboist’s own.

The Oboe Quartet from Four Miniatures for Oboe and Strings by H.S.Mohamed that the programme notes explained “is reflective of a Sri Lankan fisherman’s folk song and is a haunting testimony to his nostalgia towards the land of his birth” was truly evocative of that description and was played with feeling.

Although not a prolific Baroque composer, Venetian aristocrat Benedetto Marcello composed delightful chamber music. The Sonata for Cor Anglais and Strings transcribed by oboist Vachegan Tadevosyan from the original flute sonata was a fine example enlivened by the ensemble’s animated performance through four short movements.

Finally the ensemble played Soviet composer Dmitri Shostakovich’s enchanting Waltz No. 2 from his Suite for Variety Stage Orchestra – not the Second Jazz Suite as is widely believed. It’s difficult to credit Shostakovich’s creativity with this entrancing piece considering he lived through turbulent times. This venturesome composer like the ensemble’s founders finally found success of a long-cherished dream which made this piece an apt finale.

In response to a standing ovation but unprepared for an encore, the ensemble played a movement from Marcellos’s sonata and Shostakovich’s Waltz No.2. Added to the concert’s success were the excellent acoustics of the remarkable venue, Thapar house with its old world elegance. Each instrument sounded clear and maintained its distinct characteristic.

The Effem Ensemble has certainly enhanced the Calcutta concert scene. Not only with well-played quality music but a judicious selection of compositions well within the musicians’ capability so often an error of judgement with other groups. The ensemble will hopefully introduce lesser and unknown compositions where new composers can debut in the Sir Henry Wood tradition, musicians can enhance their repertoire and music lovers make new discoveries.