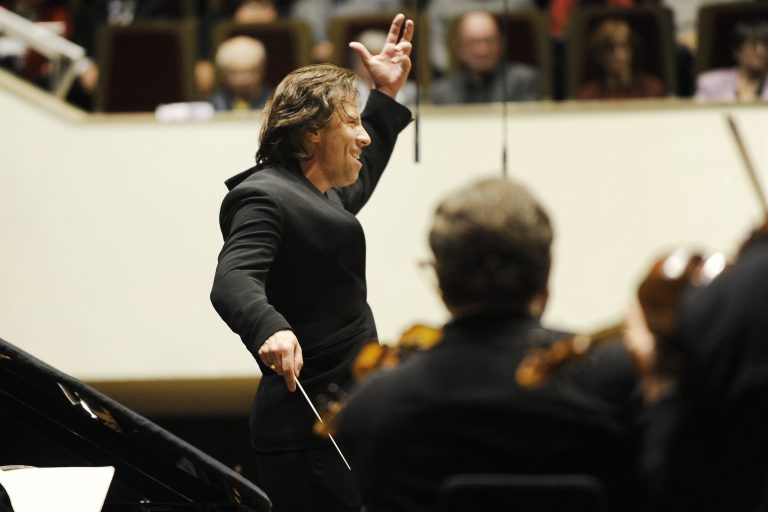 The Leipzig connection: Kristjan Järvi with the MDR Symphony Orchestra

Concert-going often involves a spot of sleuthing – what, if anything, links diverse works in a programme? Kristjan Järvi’s concert with the MDR Symphony Orchestra on June 11 at the Gewandhaus, Leipzig, appeared to be underpinned by geographical links to Leipzig. For the first work, a transcription for full orchestra of Bach’s famous Chaconne in D by Arman Tigranyan, the link was the clearest: most of Bach’s most productive years were spent in Leipzig, when he was Cantor of the Thomaskirche. Max Richter, the composer of the second work, Exiles, was born in Hamelin, not too far from Leipzig. The concluding work of the concert, Rachmaninov’s Symphony no. 2, was written in Dresden, to which the composer had moved after leaving his conducting job in Moscow to pursue composition full-time.

Bach’s Chaconne in D Minor for solo violin, called by Yehudi Menuhin ‘the greatest structure for solo violin that exists’ has long intrigued many composers with its implicit harmonies. Brahms wrote of it: ‘On one stave, for a small instrument, the man (Bach) writes a whole world of the deepest thoughts and most powerful feelings.’ Tigranyan’s orchestral transcription actually adds something even to this much-transcribed work, if one is prepared to forego the elegant austerity of the original. The full orchestral scoring is in the nature of what the Germans call a Gedankenexperiment, or thought experiment – what might Bach have written had he had the possibilities of a full Romantic orchestra? Where there was subdued tragedy in the original, there is the darkest foreboding here, declaimed by the brass: the strings, in deep pianissimo, make the D major entry utterly heartstopping; and the bell-like percussion entries towards the end are sombre death-knells.

Max Richter’s Exiles was a study in contrasts; the orchestra had only a small percussion section in addition to the strings (which however, included a piano, organ and two harps). Richter’s minimalism recalls Philip Glass and Arvo Pärt; the simple theme in a minor key is the blank canvas on which many orchestral colours and textures are superposed, as it appears in a new avatar at each iteration. From blue-violet mists of alienation conjured up by pianissimi violins and harps, to the menace of glissandi on the cellos and double basses, and the triumphant tutti entry of the major key underscored by the timpani – all of these faded into the same nothingness with which they had begun, through the haunting repetition of the theme on the piano.

And so to Rachmaninov’s Second Symphony, which was composed in the shadow of the fierce rejection of his first Symphony by the public. Both this and the Second Piano Concerto were written while Rachmaninov was being treated for depression by a renowned hypnotherapist, and in the end, both were immensely successful. Seen from this distance, it is astonishing that this impeccably orchestrated symphony, with neither orchestral flamboyance nor self-indulgent emotionalism to mar it, should have been the work of a composer assailed by self-doubt. The brisk outer movements repudiate all accusations of schmaltz; while the quick transfer of the melody line from strings to brass to woodwind and back ensure that there’s never a dull moment. The first movement, Largo — Allegro moderato is largely bleak, with a few faint gleams of warmth, while the second movement Allegro molto evokes autumnal landscapes with their flying leaves and the spectre of death in the Dies Irae chorale, both enveloping a lost, lyrical centre. The heart of the symphony, the sublime Adagio, is one of the most moving remembrances of things past in the history of music, with its recollections of happiness neither to be relived nor escaped from. The last movement, Allegro vivace, almost deliberately turns its back on this outpouring of nostalgia, as it moves on to a brilliant climax. Kristjan Järvi’s use of livelier tempi than usual in the outer movements only emphasised the melancholy of the Adagio by contrast, and brought a youthful freshness to this oft-played symphony.

Overall, Järvi carried off this hugely varied program with confidence and élan. In response to the rapturous applause which followed the concert, the orchestra played an orchestral arrangement of Beethoven’s ravishing Cavatina from his String Quartet, Op. 130.