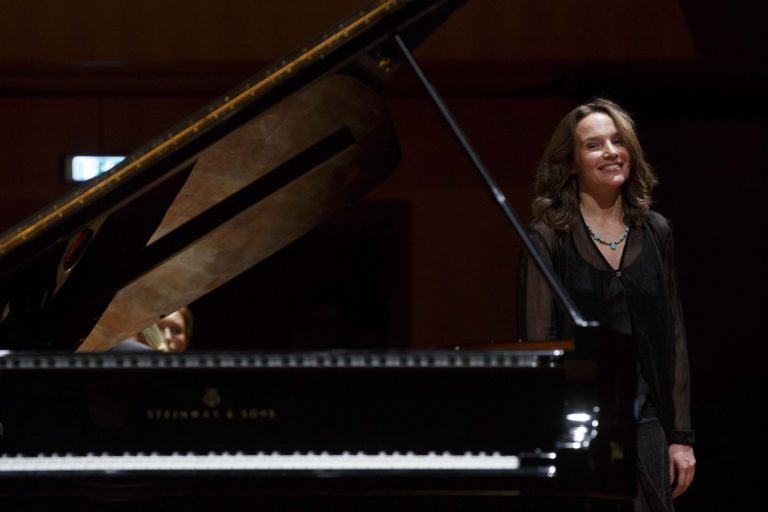 Even the second time around this year, Helene Grimaud’s Acqua (Water) concert felt new to the ear, as though refreshed by a spritz of fresh insights. The pieces in the programme are almost all thematically related to water, and intricately interconnected: Luciano Berio’s  Wasserklavier was inspired by a Brahms intermezzo, while Tore Takemitsu’s Rain Tree Sketch II, written in memory of Messiaen, had strong echoes of Debussy as well. Faure’s Barcarolle no. 5 evinced a very Brahmsian romanticism couched in impressionistic harmonies. Ravel’s Jeux d’eau, although dedicated to Faure, was musically inspired by Liszt’s Les Jeux d’eau a la Villa d’Este. Isaac Albeniz’s Almeria, an impressionistic evocation of a seaport and written in a strongly romantic idiom,  was greatly admired by Messiaen. Leos Janacek’s In the Mists, although characteristic of his own brand of romanticism, was strongly influenced by Debussy, whose La Cathedrale Engloutie ended the first half of the concert. Brahms’ Piano Sonata no. 2 was the last work in the programme, its inclusion in an otherwise water-themed concert perhaps due to this composer’s towering influence over most of the rest.

Grimaud’s delicate rendition of Berio’s Wasserklavier conjured up a rain of melancholy, recalling the  Brahms B flat minor Intermezzo which inspired it. Her playing of Takemitsu’s Rain Tree Sketch II brought out the ‘celestial lightness’ of its markings, as well as its clear echoes of Debussy and Messiaen. In Faure’s Barcarolle no. 5, Grimaud emphasized the romanticism of its pleading and openly emotional melody line; despite the post-impressionist harmonies, one could be forgiven for thinking she was playing late Brahms. In Ravel’s Jeux d’Eau, Grimaud’s fleeting fingers conjured up wistful memories of the fountains of innocence, along the lines of the composer’s inscription: “The river god laughs as the water tickles him”. She next evoked the warm sensuality of southern Spain in Albeniz’s Almeria, its undulating rhythms finally yielding to a poignant crepuscular glow. Liszt’s Les Jeux d’Eau a la Villa d’Este was a tour de force for Grimaud, her brilliant musicality equal both to its scintillating cadenzas and to the transcendental radiance of its core: “But the water that I shall give him shall become in him a well of water springing up into eternal life”.

Leos Janacek’s In the mists, written in the midst of personal tragedy and professional failure, turned out to be one of the most spectacular examples of his pianistic writing, especially in its use of modal harmonies. Grimaud’s playing of the Andante conveyed a deep yearning that struggled to be heard through choking, claustrophobic mists of isolation and despair. Mists of a very different kind, iridescent and ethereal, were suggested by Grimaud in Debussy’s La Cathedrale Engloutie: they parted to reveal the shimmering emergence of a submerged cathedral whose grand chords first resounded gloriously, then echoed softly to the evanescent traces of its dissolution back into the sea.

The concluding work of this programme, Brahms’ Piano Sonata no 2, is not seen to be among Brahms’ best piano sonatas; like Brahms’ First Piano Concerto, this is an offering of love to Clara Schumann (to whom it is dedicated ‘with deepest respect’), but one that is not nearly as musically mature. The jagged edges of this Piano Sonata need to be handled with care, to form a thematic whole with the plaintive interior melodies; Grimaud, on the other hand, went at the sonata with a febrile, feral aggression, almost deliberately avoiding any attempt at tenderness, bringing out only the raw desperation of an impossible love. Although this approach wasn’t always felicitous, its courage and searing honesty were remarkable.

Helene Grimaud’s stage presence, for all its fragile loveliness, acquired a vulpine stealth as she searched for musical meaning, a lupine ferocity as she overthrew received interpretations to reveal stark passions and difficult truths. Her playing in near-total darkness and without conventional breaks created its own universe, launching the audience into often perilous voyages of self-discovery, followed by the shock landings of catharsis.

Transfiguring collective emotions is the acme of musical performance, attainable only by exceptionally sensitive and authentic artistes; Helene Grimaud’s pianism showed yet again that she belongs to this elite.