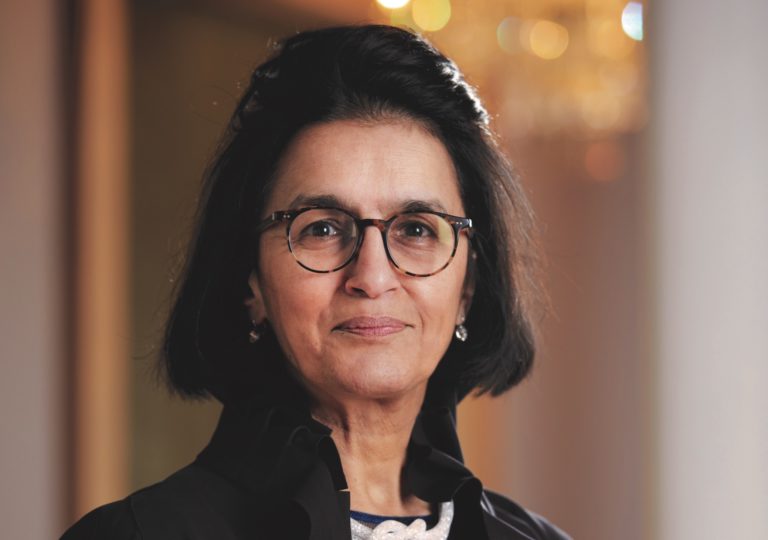 Fundraising £8m in a year to building an opera house and now staging Tavener’s ‘Krishna’: In conversation with Indian-origin impresario Wasfi Kani OBE

Wasfi Kani was born in East London to Indian parents who had left the subcontinent during the Partition of India. She attended Burlington Grammar School for Girls, where she excelled at Maths and Music. She played the violin for the National Youth Orchestra and proceeded to study music at St Hilda’s College, Oxford. In 1992, Wasfi was appointed Chief Executive of the Garsington Opera. In 1997, she established Grange Park Opera which moved in 2016 to British television presenter and author Bamber Gascoigne’s estate in West Horsley Place, Surrey. Wasfi raised £10m within two years and built a La Scala-esque theatre called Theatre in the Woods – perhaps the first one to be built in the 21st century. Wasfi Kani is an Honorary Fellow of the RIBA and St Hilda’s College, Oxford. She got an OBE in the New Year’s Honours List 2002 for her work in bringing her show organization, Pimlico Opera, into jails.

Serenade Team: You raised over £8m out of your £10m budget in the first year of fundraising when you wanted to take on this project and build this legacy. How did you accomplish this herculean task?

Wasfi Kani: I’ve been working in this world of opera for a long time and know an abnormal number of people. The first thing you do is that you go to the people you know who put seed money in and then new people who live in the area emerge. When you’re raising money at that kind of level, you must say that the minimum donation is £20,000. You are not interested in £5. People I’ve never met before in my life were giving this figure. I was very lucky because one of my long-standing supporters who was chairman of Unilever at that moment said I could borrow an office in Mayfair to have meetings. I never ever googled anyone who had asked for a meeting. I just sort of genuinely have the meeting face to face. I think we’re kind of animals and we probably understand someone in the first ten seconds of meeting them. Some people would give money and some people I never heard from ever again. I had quite a decent sized model in the theatre. I would show potential sponsors this model and then I had something called a show-and-tell which is just a set of pictures I talked through. The end had the cash flow for two years and then the very last page showed the levels you can give to support it.

One of the people who had asked for a meeting was a man called Michael Cowan and he arrived with his wife Hillary. He had written lots and lots of questions to me. I did my show-and-tell which has some jokes but he never laughed at any of them. I got to the end and showed him all the numbers. He then said: “If I give you £200,000, I get my name in a box? That wouldn’t mean anything to anyone.” And his wife said: “Darling, if you give her £200,000, she will put your biography in the box.” There are nice exclusive boxes in the theatre. He then said: “If I give you a million pounds, I get my name in the vestibule of the theatre?”. He ended up giving us £2m. He was born conjecturally deaf so doesn’t appreciate music very much. Hillary loves music. He thought it was very good for the area.

ST: In 1989, you founded a small touring company called the Pimlico Opera which specialises in performances in unusual places such as prisons. It gave the opportunity for prison inmates to work with professional directors and singers towards creating productions for the public. Why was it important for you to bring music to the prison?

WK: I went to a state school which happened to be behind a very big prison. In the late 1980s when I was doing these performances for rich people, I thought of a prison, I knew this prison, so I just wrote to the Governor and then I just kept doing it. I’ve changed the project slightly but I do genuinely believe that by the grace of God it is luck. My mother would encourage us to work unbelievably hard and I think we do in a way have different levels of engagement. I’ve been unbelievably lucky.

ST: Your parents left India during the Partition. What role did they play in encouraging your music education and are you still connected with India?

WK: My mother was born in Agra and is from the family of I’timād-ud-Daulah. I’ve been to the house where she was born in Gulab Khana. The area is all built up now but in the middle of it stands this wonderful palace where she was born. I did go and have a look at it. When Partition happened, they lost everything. My father lived in a wonderful house near the Jama Masjid in Old Delhi, one of which has been turned into an orphanage and another has become a hospital and I’ve seen them. So, they came to England with nothing apart from a trunk. My father was very unhappy here. He worked as a labourer in a soap factory. My mother was always worried when we went to school because both our parents didn’t speak English very well. They made all five of us work incredibly hard. I don’t know where the music came from. I think I saw a violin case in one of the teacher’s offices and I was very intrigued by it. The motivation for music kind of came from inside. I loved practicing the piano. As I am now 64 and I get older, I love music more and more.

ST: Why is opera important today?

WK: Opera is a very sophisticated art form. It’s the one which brings together so many different elements. It brings everything together – you have a massive set, the world of sound with a wonderful orchestra! The narrative is to engage your brain and feelings. By engaging your brain with ideas, your eyes and your ears, that is what creates these very deep feelings. Particularly during the 19th and the first parts of the 20th century, amazing operas were written that are still incredibly popular today because of these feelings.

A lot of opera’s profound feelings are about death. I think that is why young people are not interested in opera till later in life. Most of them feel they want to have a sort of hedonistic life. It is only when years pass and you’ve experienced sadness and the difficult things of life – that is when opera speaks to people. I know there are comic operas but I think that comic operas have a massive problem today because comedy today and what is funny is so different from what was funny in the 19th century. A Turkish man was funny in the 19th century like ll turco in Italia (The Turk in Italy). A Turkish man going to Italy is no longer funny and is faintly racist.

I can’t make young people like opera or make them want to set aside the time to come. We have schemes for young people where basically if you want to come and can’t afford it, then we will give you a free ticket. We have other schemes where if you’ve got a job and think it’s too much money then you can buy a ticket for £35. I know every opera company has become obsessed with this issue about trying to focus everything on young people. I think it’s wrong. Opera will speak to young people later in life.

ST: Sir John Tavener’s opera Krishna was completed in 2005 and will premiere in your theatre in 2024. Can you tell us about this project and will you be looking at bringing it to India?

WK: Yes! I am absolutely determined to bring it to India. I am in touch with some people in Mumbai. I am good friends with Soprano Patricia Rozario OBE. I am also in touch with the English National Opera’s Martyn Brabbins. Through them I will be looking for Indian collaborators. I must raise a huge amount of money. The participation of the Prince of Wales will be very important. The Prince of Wales in his house in Gloucestershire called Highgrove House has a garden containing busts of seven people admired by him. One of them is John Tavener. So, the relationship between the Prince of Wales and John Tavener was very strong. I had just launched the project and then the whole Covid-19 pandemic happened. I’ve not made any progress on it. I have a list of connections and it will come to India.