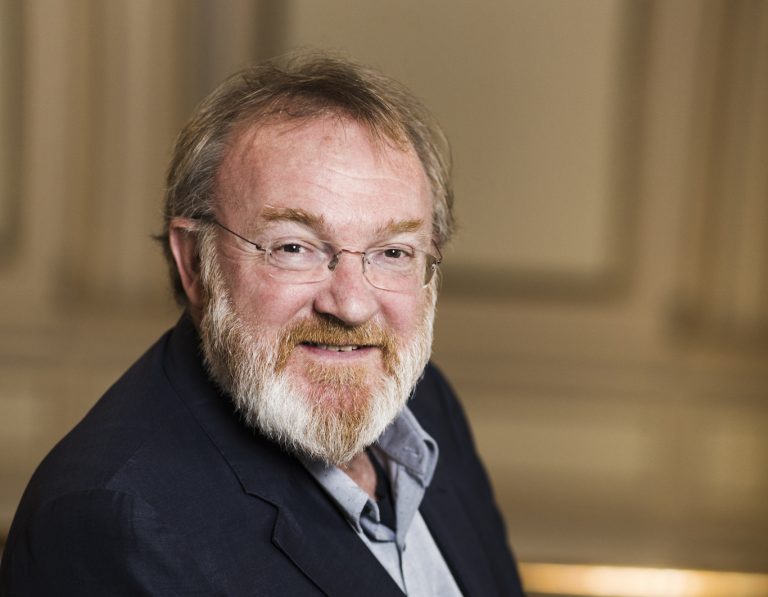 Acclaimed British conductor Martyn Brabbins is all praise for the Symphony Orchestra of India, the receptive Indian audience and the city of Mumbai. Beverly Pereira speaks to him ahead of his second performance with the homegrown ensemble at the NCPA, Mumbai.

It has been a busy period for Martyn Brabbins, who was appointed as music director of the English National Opera (ENO) in 2016. He has since led and conducted several critically acclaimed opera productions, including Mozart’s The Marriage of Figaro. It was a post assumed in the wake of the dramatic resignation of the British opera company’s predecessor, Mark Wigglesworth. It was also a position bravely assumed in a bid to bring back to life a company ridden by many a crisis. The last two years have been a highly stimulating and rewarding period for the music director. “This season opened with the incredible Strauss opera Salome. Surely one of the greatest orchestral scores ever composed. The orchestra of ENO and I relished all the richness and vitality of Strauss’s opera, and together with a fabulous cast we enjoyed an amazing musical journey,” says Brabbins.

Brabbins, 59, is inarguably a familiar face on the international music circuit. The respected conductor regularly works with some of the world’s most prestigious orchestras such as the Tokyo Metropolitan, Royal Concertgebouw and Deutsches Symphonie-Orchester Berlin. In addition to being one of the UK’s most well-established conductors, he is an award-winning interpreter of contemporary British classical music and a long-time supporter of British composers. He also currently serves as the music director of the Huddersfield Choral Society and visiting professor of conducting at the Royal College of Music.

Brabbins is also wildly popular with Indian audiences who are more than just acquainted with Western classical music. They closely follow performances in the genre, both live and recorded. It is a popularity not just attributed to his regular appearances on the BBC Proms or his prize-winning recordings of operas. The conductor had performed with the Symphony Orchestra of India (SOI) at the NCPA, Mumbai in two highly lauded performances in September 2016. Hundreds of Western classical music lovers spilled into the Jamshed Bhabha Theatre to welcome the celebrated British conductor at the podium. Brabbins, then the chief conductor of the Nagoya Philharmonic Orchestra, led the SOI in two concerts with Brahms, Wagner and Holst.

“The Brahms and Wagner we performed was familiar territory for the orchestra. The well-trodden path of German Romanticism is such a joy to rehearse and perform,” he says. “The Holst was not so well known, but since The Planets is such a fantastic orchestral masterpiece, the SOI relished the opportunity to get their collective teeth into this music. And they had a very exciting performance of this demanding score.” Added to this astounding mix was a choir trained by Patricia Rosario. “We worked very hard together and they provided a most beautiful conclusion to the performance, with a refinement and sound rarely encountered,” says Brabbins.

The packed NCPA concert hall was an impressive sight, he remembers, and the positive reaction was a joy to behold. “The sound of a top-class orchestra playing beautiful music is so special, and it is a wonderful thing that the musical public in Mumbai have embraced the SOI in the way they have,” he says.

Next month, to mark the opening of the SOI Spring 2019 season, Brabbins will arrive in Mumbai to lead the SOI in an exciting programme featuring the works of Weber, Saint-Saëns and Rachmaninoff. He will then lead the orchestra on 9th and 10th February, 2019 in Beethoven’s Ninth Symphony. The concert will feature both Indian and international choirs joined in by world-class soloists, and open with Beethoven’s Choral Fantasy. “After our first concert series together, Khushroo N Suntook and Marat Bisengaliev very kindly asked me to return to conduct the SOI again, and the first opportunity for this to happen is in the February 2019 season,” he explains.

Looking back at his 2016 trip to India, Brabbins remembers Mumbai as a very exciting city to visit. “I was there during a very important festival, and the atmosphere, celebration and happiness was apparent everywhere! The warmth and generosity of the people I met was exceptional. I was impressed and touched by the humility and kindness I found.”

“Khushroo proved to be the most generous and welcoming of hosts. He is steeped in the musical culture of Europe, and particularly passionate about opera and the great singers of the past. Being taken in to the NCPA’s incredibly impressive library was a real privilege, and breathing in the rich cultural heritage that emanates from the NCPA via Khushroo was uplifting.”

As for the SOI, he reiterates that the body was truly delightful and inspiring to work with. “Galvanising them into a fine ensemble was a big pleasure! They are eager to do their very best at all times, well-prepared and individually top-class players. One real bonus for me was the fact that many of the orchestra members were Russian or, at least, Russian speakers. And having spent two years studying conducting in Leningrad, this gave me the wonderful opportunity to reinvigorate my somewhat rusty Russian speaking!”

For the love of music

Brabbins’s decades-long career has taken him from one musical pinnacle to another, and his background in music is certainly worth a study. He played the euphonium in school and the trombone at university, mainly for brass bands. He studied composition at Goldsmiths, University of London, after which he went on to study conducting under Ilya Musin at the Leningrad Conservatory. Three decades down the line, Brabbins remains captivated and invigorated by the musical process of composing and conducting. “That in itself is the high point for me – simply doing what I do. I am so very lucky,” says the conductor, who was propelled to international fame when he won the first prize at the Leeds Conductors Competition in 1988.

Today, Brabbins might have found stability in his duties to revive the English National Opera. But his schedule still teems with commitments in various parts of the world. Only recently, it was also announced that his contract with the ENO would be extended by two seasons to 2022. “Being music director of this company, with its rich history and wonderful musical traditions, is truly an honour, and I look forward to the years ahead with great enthusiasm.”

Among his many engagements for the 2018-2019 season are performances with the Philharmonia at the Royal Festival Hall and a continuation of his Vaughan Williams symphonic cycle with the BBC Symphony at the Barbican and for Hyperion. Soon after his performances with the SOI at the NCPA Mumbai in February, Brabbins will lead the SOI to a new milestone when he tours with the SOI on its maiden tour of the UK. The SOI will perform at Cadogan Hall, London; St. David’s Hall, Cardiff; and Usher Hall in Edinburgh under his baton. Also part of the tour will be concerts with the SOI led by Zane Dalal in Birmingham, London and Guildford.

“The SOI will be warmly welcomed in the UK, I am sure. Rachmaninoff, Rimsky-Korsakov and Bruch – all beautiful expressions of emotions and moods through brilliant musical creativity. Everybody is guaranteed a wonderful experience. Cadogan Hall is a wonderful space in the heart of London, with excellent acoustics and a warm and loyal public. Performing there will be a special moment for the SOI as they join a long and distinguished list of international orchestras who perform at the hall,” he assures.

Martyn Brabbins will conduct the SOI on 4th and 9th February at the Jamshed Bhabha Theatre.