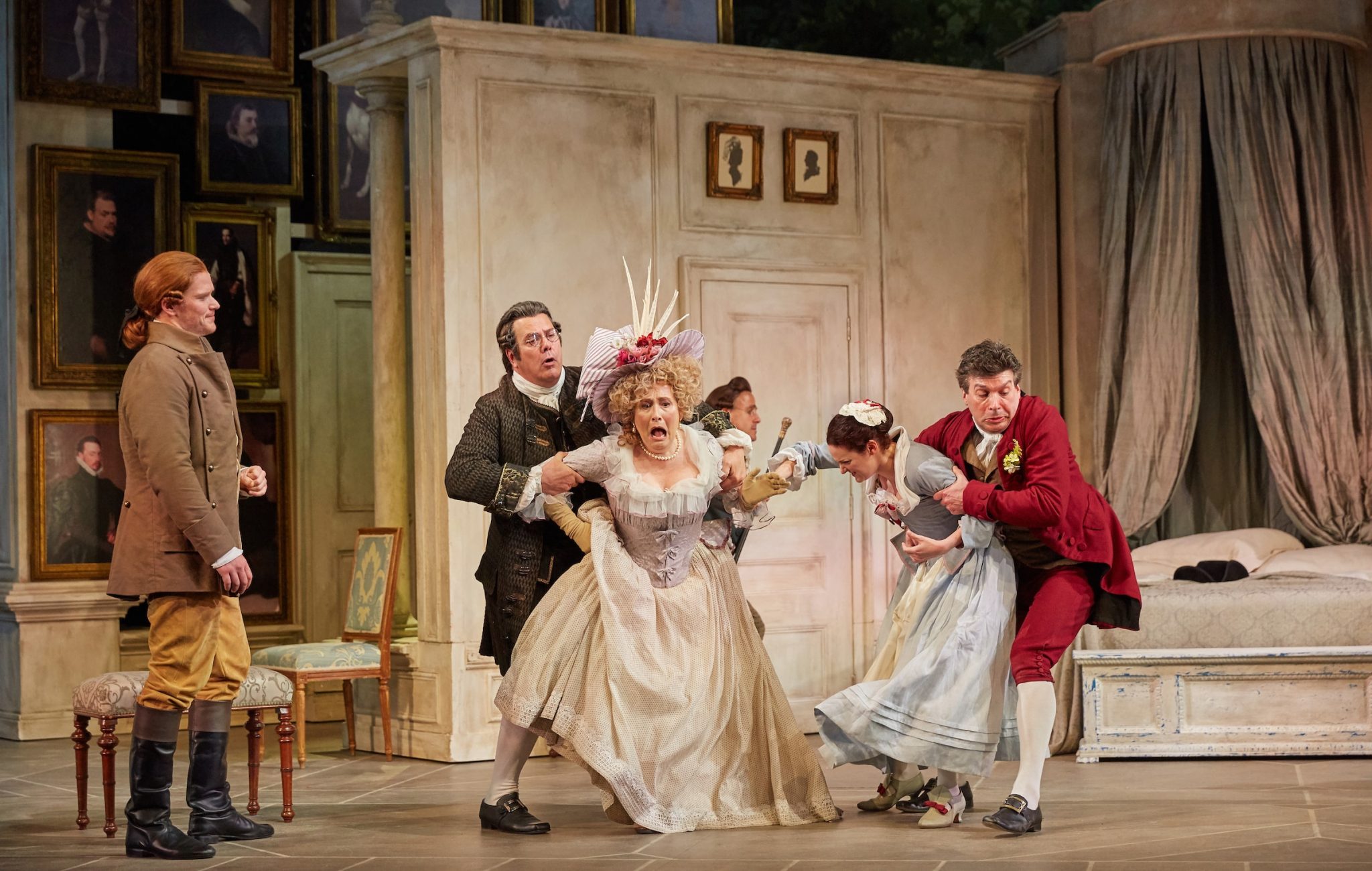 The Théâtre des Champs Elysées Paris has, to its credit, revived the 17th century tradition of operas in concert version, where the orchestra appear on stage and the singers are allocated limited space in front of them, with few or no props. However, this demands an even higher standard of performance, since the audience need to be sufficiently absorbed to get their imaginations working. As the photographs below (taken from the fully staged and not the concert version) demonstrate, the richness of both stage and costume in Mozart’s The Marriage of Figaro is so considerable that only an extremely good performance can compensate for their lack.

Happily, this is just what the Garsington Opera provided; with almost thin air for props, no stage sets, minimal costumes, a sliver of stage for singing, and agile performers who leapt into the auditorium à la Stratford-on-Avon, they were able to weave a truly magical web which conjured up all the intrigue and mischief of the original opera. The audience were riveted both by the dramatics and the singing, evident from the spontaneous applause and the laughter throughout this opera buffa.

The opera is based on Pierre Beaumarchais’ play of the same name; in fact, Beaumarchais, playwright and revolutionary, watchmaker and inventor, diplomat and spy, satirist and musician, wrote a trilogy of plays on Figaro, where the theme of each one highlighted the commoner Figaro’s intellectual superiority over the nobility. In the first of these, The Barber of Seville (the basis of Rossini’s eponymous opera), Count Almaviva meets Figaro, then the barber of Seville, who helps him to outwit Dr Bartolo, the guardian and would-be suitor of Rosina with whom the Count is in love, and whom he eventually marries.

This sets the stage for The Marriage of Figaro, at the start of which Figaro is the Count’s valet, engaged to be married to Susanna, the (now) Countess Rosina’s maid. The obstacles to their marriage are manifold, to do as much with the Count’s philandering ways and current interest in Susanna, as the revenge planned by Dr Bartolo, who has never forgiven Figaro for stealing Rosina (and her fortune) away from him, and who plans to marry him off to the old housekeeper Marcellina as the penalty for an unpaid debt. As is already evident, this opera is a merry-go-round of largely misdirected emotions: Figaro and Susanna love each other, Count Almaviva has bedded almost everything in a skirt before setting his sights on Susanna, Countess Rosina still loves her pretty worthless husband in the face of all the evidence, the page Cherubino loves the Countess with a love that dare not tell its name, Marcellina is in love with Figaro, the gardener’s daughter Barbarina is in love with Cherubino, and, just to close the circle, was one of the Count’s many bedmates.

All the action takes place within a day (la folle journée of the eponymous play): Figaro and Susanna are making joyful wedding preparations, when she reveals that the Count’s choice of bedroom for the newlyweds is to facilitate his own access to the bride. Furious, Figaro says in one of the most famous arias of this opera, Se vuoi ballare, signor contino, that ‘if the little count wants to dance, he (Figaro) will play the guitar’ and that he’ll ‘turn all his schemes inside out’.

Susanna’s worst fears are realized when the Count declares his passion for her and wants to exercise his droit du seigneur, the master’s sexual rights. In this he’s overheard by Cherubino, who’d just been telling Susanna about his passion for the Countess; when discovered by the Duke, he is promptly banished to the military. Figaro begins to consolidate his plans for duping the duke and expediting his own marriage to Susanna, which are a series of smoke-and-mirrors schemes; an anonymous letter to the Count hinting that the Countess is unfaithful to him, Susanna’s apparent acquiescence to a sexual encounter with the Count, and her replacement on the day by Cherubino disguised as a girl.

The Countess, lamenting her husband’s infidelities in the beautiful aria Porgi, amor, qualche ristoro, ‘Grant, love, some comfort’, falls in with all of this. Cherubino is sent for, and has a chance to declare his love (at least indirectly) to the Countess, in the well-known Voi che sapete, ‘You who know what love is, ladies, see whether it’s in my heart’. No sooner than he’s done this, the Count’s footsteps make him and Susanna run for cover; the Count enters angrily, anonymous letter in pocket, and accuses his wife of being unfaithful to him, clearly unaware of the irony of his jealousy in the context of his own repeated betrayals.

The Countess and Susanna between them manage to outwit the Count yet again, the page escapes, and Figaro’s agile cleverness is able to avert immediate disasters, but not the Count’s trump card in the form of a vengeful Bartolo determined to have a debt-defaulting Figaro marry Marcellina. Susanna lunges for Marcellina in her fury, before getting the money from the Count with a false promise of a nighttime rendezvous. In the end, the money isn’t needed because it turns out that Figaro is Marcellina’s illegitimate son with Bartolo; the new happy family plan their double wedding, Susanna’s with Figaro, and Marcellina’s with Bartolo.

Meanwhile, the Countess, desolate at being reduced to plotting with her servants for the retrieval of her husband’s love, sings possibly the most beautiful aria in the opera, Dove sono i bei momenti, ‘Where are the golden moments of tranquility and pleasure?’

Susanna, ever loyal to her mistress, has to carry out one last piece of intrigue on her behalf before she can enjoy her own wedding: she slips a note to the Count, arranging to meet him in the garden. The plan is for the Countess to replace Susanna, thus shaming the Count into penitence and, possibly, a renewal of his love for his wife; this plot is however carried out without Figaro’s knowledge, who falls prey to suspicion. In his jealous rage, Figaro tails the person he believes is Susanna to the garden; when he sees her going behind the bushes with the Count, he decides to seduce the ‘Countess’, who is of course Susanna in disguise.

When all is revealed, it’s the Countess who shows her usual love and generosity and forgives a penitent Count, renewed (at least temporarily) in his love: all decide that ‘Only love can resolve this day of torments, caprice and folly / into joy and happiness.’

One of the most compelling features about the Garsington Opera’s performance was that even the minor roles were brilliantly acted. Marta Fontanals-Simmons’ Cherubino had just the right degree of gawkishness as she flapped around pretending to be a boy who was pretending to be a girl for much of the time, and her singing was always breathless, like the young man in a hurry whom she portrayed. Timothy Robinson brought a wonderful rakishness to even a minor character like the oily music teacher Basilio, while Janis Kelly’s appropriately matronly Marcellina was by turns full of angry revenge and motherhood and apple pie. Kirsten MacKinnon’s breathtakingly beautiful Countess Rosina was an appropriate choice visually, but the slight instability of her voice in the higher registers was to the detriment of some of the most beautiful arias in the opera. Duncan Rock’s Count Almaviva was well sung in a deep baritone, and he played the part of the hapless but determined noble with ease. The choir were extremely competent, as was the Orchestre des Champs Elysées under the baton of Douglas Boyd.

But by far the most outstanding performances, both in the singing and acting domains, were by Jennifer France (Susanna) and Joshua Bloom (Figaro). Jennifer France had a fleet-footedness, a fluidity of voice that were a perfect fit to Susanna’s lightness of being, while Joshua Bloom’s splendid bass baritone combined with his nimble moves and the mischief and pure intelligence in his eyes and face for every minute of his stage presence, made for the perfect Figaro.