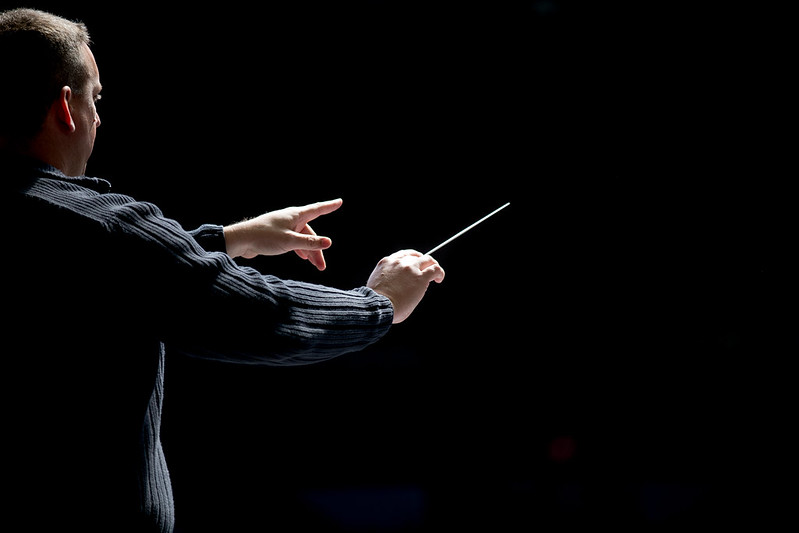 What does a conductor actually do? A surprising amount

At the age of three, I remember jumping on my parent’s sofa, waving my arms in the air conducting a record of Gilbert and Sullivans Pirates of Penzance. Last week, my four-year-old son was doing the same thing, only to the soundtrack of Disney’s Frozen.

“What are you doing?” I said. “I am being you, Daddy,” he replied as he continued directing his imaginary orchestra. I felt a heartstring pluck and I remembered as a child getting excited at the music and just letting my arms wave and wiggle. Fifty years later I do it for real. But what conductors actually do can be a bit of a mystery.

In most cases, their work takes place well before an audience sees them on the concert platform.

A conductor is a translator visualising their interpretation of little black dots on a page into an audible delight. Yes, they hold their musicians together on the day, but their primary importance is to feed an interpretation to the musicians, encouraging them to communicate a melodic and rhythmic message to the best of their capabilities.

A conductor works at different levels ranging from educational, amateur and professional situations with different genres such as choral, orchestral, opera and musical. In all categories standards, styles and techniques vary, so the job is challenging, often requiring a unique and eccentric approach.

A good conductor has a bag of tricks (developed through experience) to call upon for any musical situation. For example, the proximity between my hands influences volume. The closer my hands are together, the softer I want the choir to be, the larger the distance, the louder the sound.

Primarily we are communicators, both verbal and physical. Conductors need to form a relationship with their musicians: trust, skill and leadership are essential. The physical becomes important when verbal is not possible (when the audience is present and in earshot). This is when the arm waving comes into play. The movement in the left hand signifies dynamics, emotion and expression while the right hand is mainly used to signify speed and beat.

Conductors have unique styles and skills. Watch Igor Stravinsky conduct and you will see how he keeps an exact beat, very rigid and solid with no emotion. He allows the musicians emotional control but leads the very difficult rhythmic timing, speeds and beat. He is a human metronome.

A conductor is also an educator. It is our job to coach musicians in the accuracy of music.

You would think it’s an easier job when working with professionals than youngsters, but interpretation can lead to disagreements. Sometimes the music is incredibly difficult, sometimes musicians might not be prepared, so a degree of diplomacy is required to get the effect the conductor is after. Or, if you are Bernstein – arguably one of the greatest composers and conductors of the 20th century – nothing less than excellence is good enough and no diplomatic communication is possible.

There is a famous excerpt that demonstrates the tension between Bernstein and the young tenor soloist Jose Carreras through rehearsals for the recording of Westside Story. It’s awkward and at times cringe worthy. They are both trying to create perfection. You can see communication and passion expressed through Bernstein’s face and then Carreras’ frustration at not being able to deliver the level of precision required.

Conductors can seem to be the most stubborn of breeds. The late Romanian conductor Sergiu Celibidache is well known for his refusal to have his music recorded, believing it should only be heard in the concert hall. His determined attitude towards the orchestras he worked with was infamous, displaying strong views on and off the concert platform. However, his techniques worked and he is now seen as one of the greatest conductors of the 20th century.

Conductors’ interpretations are different, every performance is unique. Each has developed a unique style to get the desired effect.

The American conductor Joseph R. Olefirowicz is known for his genius abilities and methods to deliver his interpretations.

There’s an awful lot more going on than just arm waving, as demonstrated in the beautiful clip above of him conducting Candide. His unique and comic personality combined with his facial expressions convey his interpretation of the music to the orchestra who can’t help being infected by his charisma. You can see he keeps time with his body, not just his arms. Unfortunately, the audience rarely sees what he is doing as his back is to the auditorium.

In comparison, British-German conductor Simon Rattle takes a much more relaxed body style to Candide, but the emotion he wants to convey is translated through facial expression and flowing arm movements.

So, if you’re thinking about taking up the baton and waving those arms around, reflect on the weeks of rehearsals that get to the point of performance. Consider the months of planning to organise such a mass of people to perform and fill an auditorium. Finally, contemplate the years of practice undertaken by singers, musicians and the figure at the front, flapping their arms around, and that’s what a conductor does.

This article first appeared on The Conversation.