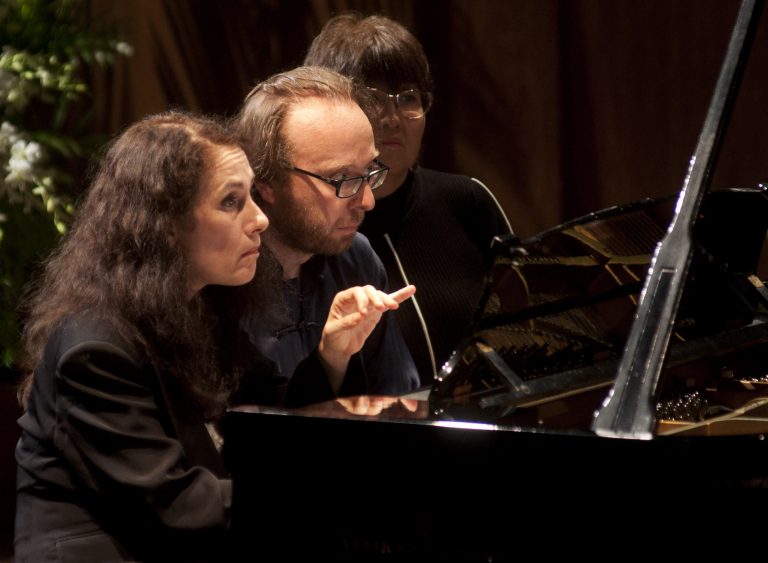 Two can play as one

On 15th September at the Experimental theatre the sell-out audience was treated to a rare occasion. A piano-duet partnership that sparkled with virtuosity and convinced with refined musicianship. The two pianists were the husband and wife team of Alessandra Ammara and Roberto Prosseda, both versatile and virtuoso pianists in their own right. It may be a cliché to say that it was a marriage of two minds playing effortlessly as one but in this case it was a resounding success.

The programme too combined the familiar with the less so, including an India/Asia premiere in Mendelssohn’s recently discovered Fantasie in D minor. This substantial work written by the 14 year old boy composer in 1824 is a truly important addition to the catalogue. It was first published only ten years ago and has already been recorded by the present artists for Decca records.

The Fantasie has a structure of four sections played without interruption. It seems that Mendelssohn knew Mozart’s own Fantasie in F minor K. 594 written by the Austrian composer to play with his sister Nannerl. Mendelssohn also had an older sister Fanny, a virtuoso pianist too, with whom he would have played his own compositions for four-hands.

The opening slow Adagio section was taken at a very measured pace always a good idea when starting a recital. The falling sevenths were appropriately melancholic; this leading into an Allegro also in D minor with rapid scalic passages tossed between the four hands. This lively section is followed by a contrasting Adagio in the related key of B flat major which is in ABA form. This is reminiscent of a duet between soprano and tenor voices (piano primo and secondo respectively) of the Italian ottocento tradition. A gradual accelerando (slightly miscalculated) leads us back to a dazzling finale (Allegro molto moderato) and a triumphant ending. Thanks to the duet team for introducing us to this marvellous hitherto unknown work and I urge you to seek it out in their recording released by Decca in 2015.

Still with Mendelssohn in the first half we were given the Overture and excerpts from the Incidental music to Shakespeare’s A Midsummer Night’s Dream. The Overture written by the 17 year old composer was a miracle of ingenuity; the opening four tutti chords played pianissimo and perfectly voiced followed by the familiar scurrying theme played without recourse to cheating with pedalling (neither sostenuto or una corda). The braying of Bottom with the donkey’s head was jocular and mischievous. A real tour de force!

The Overture and Incidental music (composed 16 years later) were played in Mendelssohn’s own arrangements. Unlike other transcriptions this Suite (four of the six movement were played) displayed great ingenuity in scoring for four-hands including subito piano effects and stark glassy dissonant chords retaining the unique timbres of Mendelssohn’s “night scoring” characteristic of Shakespeare’s play.

After the interval the programme was more predictable. Schubert’s great F minor Fantasie D. 940 is well-known to amateurs and professionals alike. Its bewitching opening theme, uncannily simple yet so moving and memorable makes this piece universally loved. And it is a great piece to play! Like the Mendelssohn Fantasie in the first half this is also in a minor key with four interconnecting sections. The key to a successful performance is getting the opening Allegro molto moderato at a perfectly judged tempo. The ensuing Largo with its double-dotted chords and trill-flourishes was perfectly judged if a little harsh tonally for my liking in this composer. The Scherzo that followed was appropriately light and fleet though with hairpin dynamics and syncopated accents not always to my liking either. The finale back to the opening tempo of Allegro molto moderato led into the polyphonic fugato giving the whole piece an organic end. While this is a matter of taste I must emphasize that the end may have benefitted from a more subtle approach – there was too much, too soon. As indicated earlier this piece technically hard enough is made that much more difficult by the need for appropriate pacing.

Finally in the programme we heard another popular choice in Ravel’s piano suite Ma mere l’oye. Written originally for piano four-hands and dedicated to the young sons of dear friends, Ravel later orchestrated these five pieces adding two more. The inspiration for this collection comes not only from the anthology of fairy tales by Charles Perrault but also other French writers; the title however remaining that of Perrault’s. Appropriately for children, it is not necessarily always complex and technically challenging as Ravel solo piano music is, there are challenges in interpretations and nuance brilliantly solved by the team. The stately Pavane that opens the set was delicate and gently rocking. The ascending thirds of Le Petit Poucet even and delicate showed marvellous control. Laideronnette displayed dazzling chinoiserie effects with perfectly judged black-note glissandi. A measured waltz and atmospheric and triumphant C major flourishes brought the concert to a fitting conclusion. In this last piece (and the encore which followed) the full capabilities of the concert grand were displayed: a panoply of colours, immense grades of touch, all manner of subtle pedalling and dynamics. I did get the sense that they reserved this for the last bringing the audience to its feet. I can only add a loud bravo in support.