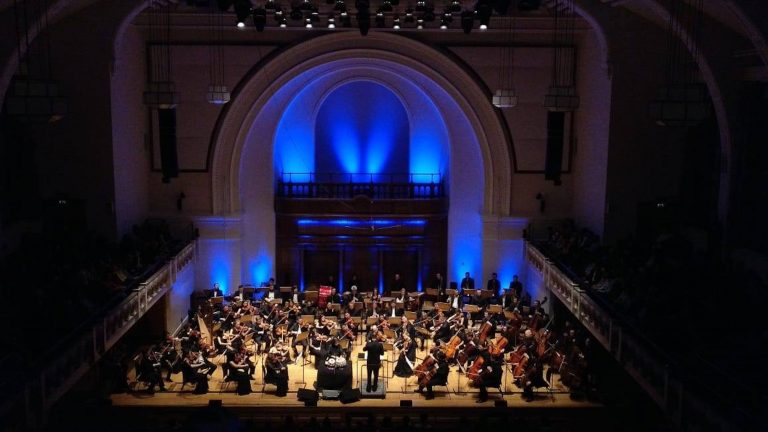 The Symphony Orchestras of India’s tour of the UK concluded on Monday evening at London’s Cadogan Hall with an exuberant program of Weber, Bruch and Rachmaninov, conducted by Martyn Brabbins.

The SOI’s Associate Music Director Zane Dalal made a surprise appearance at the beginning of the evening. Taking the podium, he thanked the audience and the UK for their support over the preceding week and announced that the orchestra had been presented with a portrait of conductor Georg Solti in honour of the successful tour, eliciting hearty applause from the audience. Guest conductor Martyn Brabbins then took to the stage to open the evening with Weber’s Overture to Oberon.

The immediacy of the sound was captivating, as warm horns and rich strings drew the audience tightly in. The clarinet was particularly sensitive, sounding as much like a breathy singing voice as an instrument at times. An expansive opening section was followed by a bold fortissimo, leading to the Allegro con fuoco, which was performed with buoyant energy.

Then it was time for violinist Marat Bisengaliev to take the stage for Bruch’s Violin Concerto No.1 in G minor. Walking swiftly on, Bisengaliev wasted no time launching into the brooding opening bars with charisma and force. This concerto with its lilting romantic lines, could have been slushy, but Bisengaliev ensured it was fresh and vibrant, his sparkling forward momentum anchored only by the orchestra.

An encore of Karl Jenkin’s The Wooing of Étaín featuring Shirish Malhotra on solo bansuri (Indian bamboo flute) alongside Bisengaliev was stunning, as the simple and beautifully phrased flute lines contrasted with fluttering improvisatory solo violin sections which managed to be both virtuosic and intimate.

The second half of the concert featured Rachmaninov’s Symphony No. 2, a masterpiece of romantic orchestral composition. It was here that the rich and intensely warm sound of the orchestra was showcased, with brooding, almost brutish, cello, double bass, trombone and timpani underpinning the first movement, making way only at times for flashes of brightness the woodwinds. The second movement, with horns calling over galloping strings was fiery and energetic, and the third movement, with its heart wrenchingly beautiful theme, was performed with dynamism and emotion. The final pianissimo was magical, as the orchestra displayed a feat of technical skill, dying away so precisely that the room seemed to resonate with the last, almost inaudible, shimmer of strings. Brabbins held the moment, arms aloft, as the audience held their breath. The fourth movement brought back sparkle and swirl, as the strings, a dominant force in unison, drove the piece to a thrilling end.

I saw the Symphony Orchestra of India perform at both the Birmingham Symphony Hall, the first date of their UK tour, and again at this concert at Cadogan Hall, less than a week later. In Birmingham they were fizzing and bright. At Cadogan Hall though, after an intensive week of travelling and performing, the sound had condensed and matured into something rich, deep, supremely warm, and very personal. The musicians, far from seeming exhausted (which would be forgivable after such a rigorous tour) played with assurance and spiritedness – here was a multi-national group of players truly binding together to form a coherent, confident orchestra with a voice all of its own.

In both concerts a good proportion of the audience clapped between movements, giving themselves away as classical first-timers, newbies to symphonic repertoire and to live orchestral performances. Those claps, which I had never heard before in a British concert hall, and which are so often met, sadly, with disapproving raised eyebrows, should be music to the SOI’s ears. They prove that the SOI has been able to achieve in only one tour what British orchestras and concert halls have been desperately trying, and for the most part failing, to achieve for decades. They prove that the SOI have been able to draw in new audiences, they have made classical music exciting to people from diverse backgrounds, to younger people, to people who would have previously not every considered buying a ticket to see an orchestra. They have, in their bold presentation of Indian pieces coupled with their brilliant execution of canonical repertoire, proven that orchestral music can be inspiring and relevant, and that new audiences are there, and will come to concerts. Sitting in the stalls at both concerts, I felt a genuine buzz in the atmosphere, as this young, vibrant orchestra performed to a fresh and diverse audience. For this, the SOI should be truly lauded.