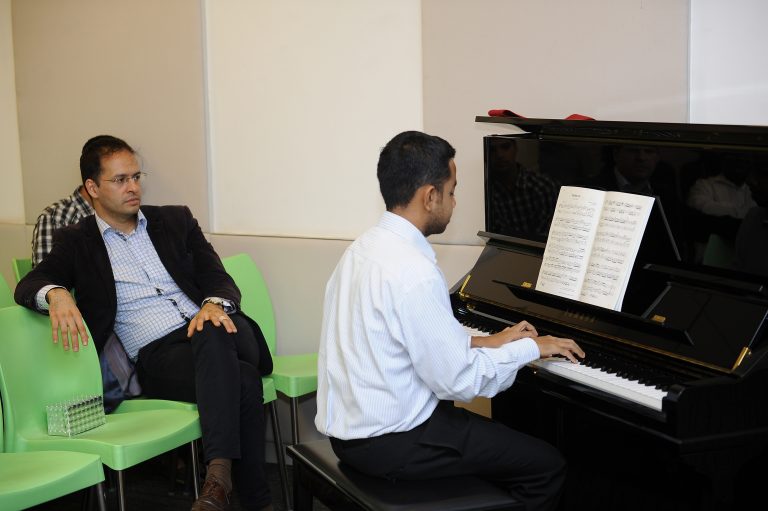 Playing music, like most other forms of art, comes with its own set of responsibilities, which go beyond the surface level and mundane. As your fingers touch the ivory, or slide across the nylon, you are now placed with the task of interpreting and projecting, maybe even redefining, the piece you’re about to render.

A perfect rendition is seldom limited to replicating the tones, rhythms and sounds used by someone from a century back, because context is everything in music. Frédéric Chopin’s sensibilities in the early 1800s can’t be expected to match Ed Sheeran’s in the generation of Spotify and Snapchat. The artist, then, has to tweak the piece in a way where it resonates with the audience as well as holds the sentiment and essence of the original composition.

When we enter the premises of Academy of Western Music, Chennai as students, we’re part of the fortunate few who have the vantage point of interacting with teachers who will never ask a student to mechanically replicate a piece. They push you to feel and emote every note, and make the music come alive. The Academy also opens up opportunities to interact and learn from accomplished figures in the industry. A masterclass by Mr. Marouan Benabdallah was the most thrilling experience for us. I was one of the five students who were selected to display our skills and techniques live, to a pianist as extraordinarily talented as him.

Having a concert the same evening didn’t seem to bother him one bit, as he heard, scrutinised and ran a fine-tooth comb through every student’s rendition, giving some invaluable feedback. An audience of about 50 people, from the Academy and outside, had gathered to watch the masterclass and Mr. Benabdallah spoke to the entire crowd whenever he wanted to give any advice. The choice of tools can be different, but the principles of music rarely change, he emphasised. The jitters and nerves of having such an accomplished figure at a breathing distance were quickly calmed by his easy-going demeanour and encouragement. My rendition of Sonata in A K.209 by Domenico Scarlatti was well received by Mr. Benabdallah and he gave me some very helpful advice on technique and groove of the piece; for example: how a 3/4 piece should never sound and feel the same as a 4/4 one. He also stressed on the tasteful usage of the pedal to add more colour to pieces which could go a bit dry on the piano, like the ones originally composed on the harpsichord.

I’m sure I speak for everyone present that afternoon, that we’ve all taken away feedback that’ll prove to be immensely crucial in our respective musical trajectories.

It was an amazing master class that really helped me to understand the importance of practice when you learn how to play the piano.

This master class has truly changed my perception about piano playing! The notion was clear and it taught me that there is always a lot more to learn.