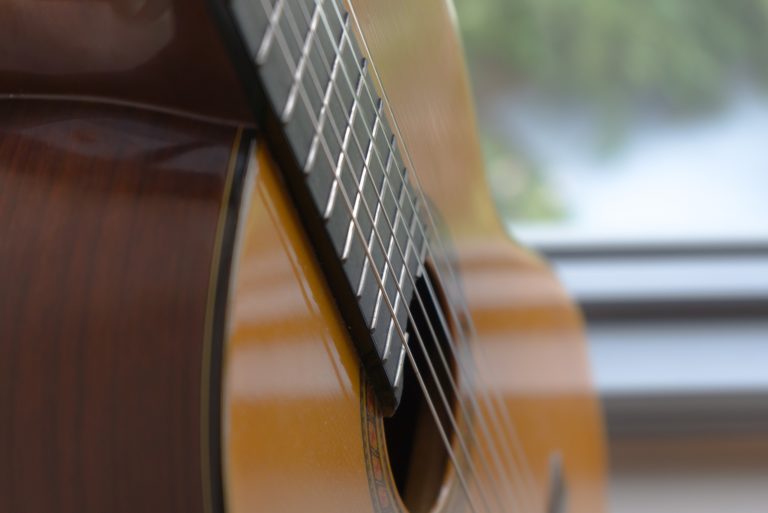 The Rising Popularity of the Classical Guitar in India

Ritwik Bhattacharya, guitarist and academic consultant with Trinity College London-India, gives an overview of the classical guitar scene in India.

The guitar is undoubtedly one of the most popular musical instruments in the world. Almost every child, at some point or another, dreams of making that dramatic stage entry, slinging a guitar, and wooing thousands of adoring audience members. The life of a rock guitarist seems very glamorous indeed, but the classical guitar, at least in India, has historically been quite an underrated gem. The likes of Andrés Segovia, John Williams, or Julian Bream are seldom looked at as heroes, though they are absolute giants in their field. And understandably, the image of an electric guitar-slinging rock star is far more exciting to most teens than that of the sober performer on a nylon six-string. I don’t mean to say that Western art music doesn’t have its fair share of rock stars, but classical and folk music, played on and written for the guitar, is still relatively overlooked for various possible reasons that may include the lack of amplification and tone-shaping capabilities, and the complexity of the music written for the instrument.

Having said that, there have been a few extremely popular compositions for the classical guitar through the centuries. The works of Sor, Tarrega, Carulli, Villa-Lobos, Ponce, Rodrigo, Sanz, York and Brouwer are extremely popular in the world of classical guitar. While the classical guitar has generally been viewed as a solo or duet instrument, Joaquin Rodrigo’s work, in particular, has showcased the classical guitar as an instrument that works beautifully with an orchestra. The second movement of his ‘Concierto de Aranjuez’ has even been an inspiration to jazz legend Chick Corea, who has used the opening theme to the second movement in arguably his most popular song, ‘Spain‘. Classical guitar music has also made its way into popular culture, with Tarrega’s Gran Vals notably being heard billions of times as the Nokia ringtone.


Classical guitar has seen, and continues to see its fair share of virtuosos as well. Fernando Sor was famous for being a technical genius on the guitar himself, aside from being the popular composer that he was. Segovia was responsible for bringing classical guitar music to the masses, and is universally looked up to. In modern times, the likes of John Williams, Pepe Romero, and the late Julian Bream have pushed the boundaries of technical and musical proficiency on the classical guitar. Paco de Lucia had, in his lifetime, also been a massive influence to music aficionados of the world, and brought classical and flamenco stylings to jazz compositions to create a unique sound.


The guitar is also popular as an instrument that is relatively simple to transcribe for. Bach’s Cello Suites, Beethoven’s ‘Für Elise’, Albeniz’s ‘Asturias (Leyenda)’, and Paganini’s Caprices, among a plethora of other compositions, have been transcribed for performance on the classical guitar. The resemblance of the guitar to its ancestor, the lute, also means that a vast Baroque repertoire can be played on it. These compositions have also made their way into the repertoires of contemporary guitarists. ‘Asturias’ was the inspiration behind The Doors’ ‘Spanish Caravan’, Paganini’s 5th Caprice inspired guitar virtuoso Steve Vai’s ‘Eugene’s Trick Bag’, and Yngwie Malmsteen is very well known for playing Bach and Paganini’s compositions live.

The popularity of the classical guitar in India has historically been quite low, but over the last three decades or so, thanks to the Indian Guitar Federation and its associated bodies, and dedicated and inspiring teachers, India has been training an ever-growing number of classical guitarists every year. Cities like Chennai, Pune, Delhi and Kolkata, in particular, have become popular hubs for classical guitarists. The Calcutta Classical Guitar Society (CCGS), founded in 2009, hosted the first Calcutta International Classical Guitar Festival, the only classical guitar festival in India, and the largest of its kind in Asia. Over the last decade, they have hosted performances of about a hundred Indian and foreign classical guitarists, a vast number of masterclasses and workshops, and has incorporated the Spanish Classical Guitar Competition by the Instituto Cervantes New Delhi and the Embassy of Spain in India into the CICGF since 2016. The festival was held virtually this year from the 10th to the 13th of December.

The rising tide of classical guitarists has also produced performers like Santanu Datta, who is a performer and composer of international acclaim, and Vishnu R, who has fused the sounds and techniques of classical guitar with Carnatic elements, on a modified classical guitar that he has christened the ‘Navtar’. “I wanted an instrument on which I could blend Western harmonies with the microtonality of Indian and Turkish melodies”, says Vishnu. “I also like to experiment with various tunings for different situations. DADGAD is very conducive to providing harmony to Indian sounding melodies.” The Navtar has a total of nine strings, six of which are fretted. “The fretless strings allow me to play melodies without being limited to semitones, so I could incorporate all the minute details and nuances that a vocalist has access to. The fretted strings, on the other hand, ensure that I can play more conventional guitar lines, and harmonise the melodies and accompany myself while I play.” Says Santanu,

“There has never been a better time to be a classical guitarist in India, especially if you are a young learner! Thanks to the guitar festivals and rise of guitar societies, classical guitar has become one of the most popular classical instruments now, and India has become a destination for the top guitarists in the world. As a professional classical guitarist, I thoroughly enjoy this rise in awareness for the instrument. The competition that arises as a result of that makes being a professional guitarist somewhat of a challenge, but I believe it is healthy for us to constantly push ourselves to improve and stay relevant in an era of digitalisation and globalisation.”

Along with performers, there has been a rising number of Indian luthiers as well, who build fine, hand-crafted instruments out of sustainably sourced woods, some of which are Indian species as well. It is fair to foresee, with a degree of cautious optimism, that Indian luthiers will find a profitable market for their craftsmanship in the not-too distant future.

This future, for the classical guitar in India, looks fairly bright, with more and more people opting to learn the instrument and embrace the style. The instrument being as versatile as it is, in terms of the sounds it can produce and the widely varied applications it has in the genres of Western art music, Latin, jazz, and even Indian classical and pop, it is finally beginning to get the recognition it deserves, and is increasingly being incorporated both into the worlds of music education, as well as the arsenals of professional musicians who perform a vast array of genres.