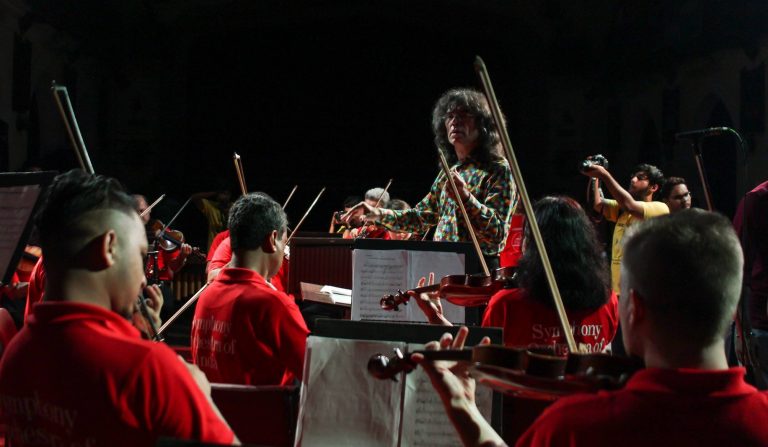 The Healing Power of Music

In 2017, the Symphony Orchestra of India performed at a few unorthodox venues, such as hospitals and crèches, in order to bring their art closer to those who couldn’t reach them. By Rinky Kumar

In the year 2006, when the Symphony Orchestra of India (SOI) came into being, the idea was simple – to set up the country’s first professional symphony orchestra that would not only offer Western classical music of international quality to Indian audiences, but also provide a platform to musicians to showcase their skills. Since then, it has performed at international venues and given audiences the chance to enjoy operas and challenging symphonic pieces by great composers.

Over the years, the SOI has played a significant cultural and educational role. The aim is to create awareness about Western classical music among people of different age groups hailing from diverse backgrounds. Outreach activities are a well-known global phenomenon in which artistes prove that music truly knows no boundaries. For instance, as part of its award-winning Music 4 Health programme, musicians of the Sydney Symphony Orchestra (SSO) perform in retirement homes and hospitals throughout Sydney and New South Wales. SSO musicians also contribute to the wider community as teachers and members of community music groups.

The idea here was to reach out to more people and focus on smaller places.

The joy of music

While outreach activities previously involved collaborations with NGOs wherein workshops were conducted at the NCPA, SOI musicians are now visiting different venues themselves. Throughout the past summer, the SOI has taken the healing power of music across the city to less-privileged children, senior homes, cancer patients and corporates. It has introduced them to the transcendental beauty of Western classical music, carrying its influence to those who may not have access to it otherwise.

Summer with SOI was developed as a community engagement initiative to spread the joy of music to all sections of society. “The month of May being summer holidays across Mumbai, we hadn’t programmed any Western music concerts at the NCPA during this time,” says Bianca Mendonca, a cellist with the SOI. “ This gave us a great opportunity to use this time to reach out to people who don’t usually come to the NCPA for concerts.” As part of Summer with SOI, seven outreach activities were conducted within a span of two weeks. These included workshops at the Happy Home & School for the Blind, Mumbai Mobile Creches, cancer hospitals, old-age homes and agencies such as Foxy Moron and Fountainhead. The idea here was to reach out to more people and focus on smaller places. The musicians performed at mobile crèches for kids whose parents work in construction sites and the children don’t have too many avenues for entertainment. Each programme lasted 45 minutes and differed from session to session, depending upon the space of the performance. For instance, only the string quartet performed at the mobile crèches. The sessions are conducted in English or Hindi, depending upon the audience, with the music being customized to their tastes.

“Music is not just for the elite, it is for everyone. I’m happy that we can bring smiles on their faces through our performance.”

As Christmas is the time to spread joy, love and peace, the musicians of the SOI will spend this December conducting workshop-style activities at various NGOs, focusing on interacting with the audience in a fun and engaging manner. The musicians will also be conducting a workshop at the True School of Music (TSM) in January as a part of the SOI and TSM partnership. Here, SOI musicians conduct workshops every two months at TSM while the TSM faculty has jazz workshops at the NCPA every two months, thereby creating synergy between the two genres of music. Earlier this year, the SOI Chamber Orchestra performed at Malhar (St. Xavier’s College) with Resident Conductor Evgeny Bushkov and in December, they will be performing at Mood Indigo (IIT Bombay) as well. The orchestra had also performed at the Happy Home for the Blind last year in December, and will be performing there again this month. The people learn Western classical music at the home, so they can understand and identify with the music. These outreach activities are learning experiences for the musicians as well. While performing for the children and the aged, they learn how to interact with a diverse audience and ensure that the session is a form of educational entertainment. “All of us feel an immense sense of joy and satisfaction after performing as part of these outreach activities,” says Mendonca. “We are happy that we are able to put a smile on people’s faces and introduce them to a different type of music. Depending on how the kids react or how restless they get, we have to tweak our performances accordingly. At times, we play fast-paced tracks as well as Bollywood songs so that they can sing along with us. We also give them percussion instruments and share tips with them on how to match their rhythm with us.”

Violinist Mario Fernandes, who has been performing with the SOI for the last ten years, says, “Music is not just for the elite, it is for everyone. I’m happy that we can bring smiles on their faces through our performance. It gives me immense joy that we can show compassion towards them through our music. We play classical, semi-classical as well as Hindi songs for them. We get a chance to interact with the kids as well as the elderly during our performance. We tell them the kinds of instruments we use, describe the music that it creates and ask them to play and participate along with us. They are joyful and enjoy spending time with us. It is heartening for me to give back to the society through my talent.”

The SOI also invites underprivileged kids from different NGOs as well as schools to watch open rehearsals during the year, where they get a chance to watch the musicians play the instruments and interact with them. It gives them an opportunity to see the artistes up close. Now that the SOI has set the stage with its outreach activities, it is raring to break boundaries and play a different tune.

This piece was originally published by the National Centre for the Performing Arts, Mumbai, in the December 2017 issue of ON Stage – their monthly arts magazine.