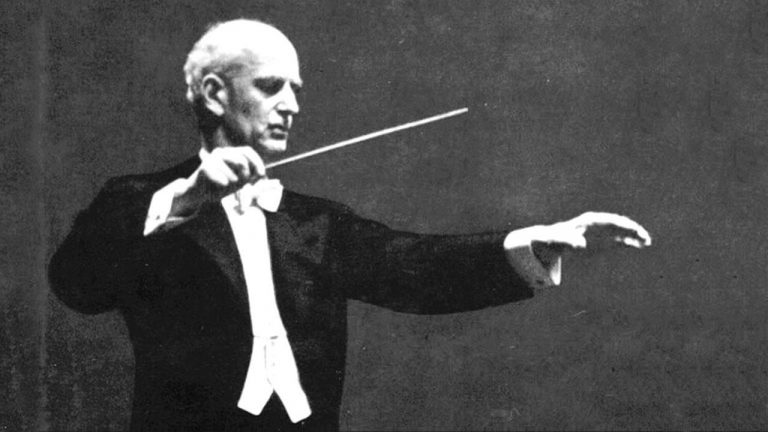 There has long been a nimbus of greatness and moral quandary around Wilhelm Furtwängler, but listening to his wartime work in chronological order is a demythologizing experience.

The German conductor Wilhelm Furtwängler has long held an exalted place among practitioners of the enigmatic art of waving one’s arms in front of an orchestra. A tall, willowy man with the air of a distracted philosopher, Furtwängler led the Berlin Philharmonic from 1922 until 1945, and again from 1952 until his death, in 1954. Many of the recordings he left behind are so charged with expressive intensity that comparing them to modern accounts of the same repertory can be invidious. Consider a performance of Beethoven’s “Coriolan” Overture, which the Berlin Philharmonic has released as part of a new box set titled “Wilhelm Furtwängler: The Radio Recordings, 1939–1945.” It begins with an octave C in the strings, followed by a loud, curt F-minor chord in the full orchestra. Few orchestras fail to shake up the audience with this gesture. Furtwängler’s players unleash a sound that falls somewhere between the musical and the geological—a seismic rumbling followed by a concussive crack.


There is no way to avoid thinking about the circumstances under which this recording was made. Furtwängler was Hitler’s favourite conductor, and the Philharmonic’s wartime concerts were taped, according to minutes from a meeting with Joseph Goebbels, “in accordance with the Führer’s wish.” The sound is exceptionally vivid for its period, because engineers used magnetic tape, a relatively recent German innovation. Hitler had been given a Magnetophon system so that he could listen to concerts at leisure. The “Coriolan” recording, which comes from June, 1943, was probably on his playlist. What did the music mean to him? To the audience? To Furtwängler? The conductor’s defenders profess to hear an anguished defiance in his Nazi-era performances. Surely this borderline-deranged account of the “Coriolan” cannot be in accord with Hitler’s ideology. But you could also hear it as a defiance of the enemy—a willingness to fight to the death.

The moral quandary inherent in the Furtwängler box set is addressed forthrightly in the liner notes, which take the form of a hundred-and-eighty-four-page hardback book. The lead essay, by the musicologist Richard Taruskin, is one of the finest things ever written about Furtwängler, who has inspired a shelf’s worth of books, along with a Broadway play and a film (both titled “Taking Sides”). Taruskin, a ferocious critic of the fairy tales we tell ourselves about the autonomy of art, would be the last to argue that we should ignore the context to which Furtwängler belonged. Instead, Taruskin confronts the reader with a quotation from a 1943 Philharmonic program book, one that pits the noble art of Beethoven against the atrocities supposedly being committed by Germany’s enemies: “It is our world that sounds forth when the bows are set in motion, the world of a spirit that no enemy air raid can destroy, nor any bomb.”

Such a statement forces us to consider the possibility that the nimbus of greatness around Furtwängler arises not in spite of the historical situation but because of it. The conductor and his musicians were working “as if there were no tomorrow,” Taruskin writes, in discussing the last item in the set—the final movement of Brahms’s First Symphony, recorded amid the inferno of January, 1945. “The music builds unbearable tension, abjures all ‘Brahmsian’ restraint or relaxation, and its raging subjectivity hits dumbfounding extravagances of tempo at both ends of the scale. . . . The bloodiest of all wars brought the foremost classical musician in the country with the most distinguished tradition of classical music to the pinnacle of his career, setting a standard neither he nor any other symphonic conductor was ever moved to duplicate.”


Most of Furtwängler’s wartime recordings have long been available, in releases of varying quality. The Philharmonic set arranges them in chronological order, across twenty-two CDs, drawing on archival tapes that were long in Soviet possession. Listening to them in sequence does not necessarily increase one’s estimation of the conductor. Indeed, perhaps by intention, the experience is a demythologizing one. Notwithstanding the many electrifying moments, I found myself questioning whether these performances really constitute some sort of pinnacle—although that may be my own way of finessing the quandary.

The set gets off to a rocky start with one of the conductor’s own compositions: the hour-long Symphonic Concerto for Piano and Orchestra. In his youth, Furtwängler had high ambitions as a composer, but his productivity dwindled as his conducting career took off. He resumed composing in the late nineteen-thirties, completing this Symphonic Concerto and producing three sprawling symphonies, the last of which was left unfinished. The musicologist Chris Walton has plausibly speculated that the cultural policies of the Nazis encouraged Furtwängler’s return to composition; his ponderous, late-Romantic style, mixing Brahms and Bruckner, was in keeping with the anti-modernist bias of Hitler and the regime.

Furtwängler’s compositions have their admirers; the conductors Daniel Barenboim and Marek Janowski, among others, have revived them. I find them pompous, vacuous, and vaguely enraging. The musicologist Roger Allen, in his recent book “Wilhelm Furtwängler: Art and the Politics of the Unpolitical,” exposes the chauvinism that underpinned not only Furtwängler’s composing but also his conducting. “A true symphony has never been written by non-Germans,” Furtwängler wrote, in 1929. His commentaries are rife with social-Darwinist turns of phrase. As late as 1947, he was declaring that the atonality of Arnold Schoenberg was “biologically inferior”—an incredible thing to say in the wake of the Holocaust. The Symphonic Concerto, whose main theme belongs on the soundtrack of a low-budget Dracula movie, is an inadvertently effective counterargument to these claims of Teutonic supremacy.

The listener must endure two other products of the Nazi era: Ernst Pepping’s Second Symphony and Heinz Schubert’s “Hymnisches Konzert” for organ, soprano, tenor, and orchestra. The former is a well-crafted mediocrity; the latter is a gruesome exercise in ersatz monumentality—the musical equivalent of one of Arno Breker’s nude Aryan heroes. One feels almost compromised by this music, yet it is a necessary piece of the historical picture. Just as revealing are Furtwängler’s murky accounts of Handel concerti grossi—dutiful gestures toward an older, more cosmopolitan German tradition.


Nor are Furtwängler’s legendarily explosive accounts of nineteenth-century repertory beyond criticism. As the hours went by, I found myself tiring of his determination to wring significance from every phrase. The atmosphere is always dire; there is a dearth of pleasure, grace, and wit. Furtwängler often criticized what he called an “American” manner of orchestral playing—soulless, machinelike, monotonous. He associated that style with Toscanini, whose fame obsessed him inordinately. But he, too, was prone to a certain hectoring relentlessness. He brings an astonishing demonic energy to the final movements of the Beethoven Seventh and the Schubert Ninth, but the effect is more battering than it is uplifting.


That said, these recordings are precious documents, from which there is much to be learned. In an age of note-perfect digital renditions, what’s most striking is Furtwängler’s willingness—and his musicians’ willingness—to sacrifice precision for the sake of passion. The conductor had a famously wobbly, hard-to-read beat, which inspired many jokes. A member of the London Philharmonic quipped that one should wait until the “thirteenth preliminary wiggle” of the baton before beginning to play. Furtwängler’s renditions of Beethoven’s Fifth tend to begin not with “bum-bum-bum-BUM” but with “b-bumbumbumBUM.” The inexactitude was by design. It’s the roughness of the attacks at the beginning of the “Coriolan” that provides a sense of catastrophic power. As Taruskin points out, Furtwängler was entirely capable of eliciting unanimity when he wanted to, as rip-roaring accounts of Strauss’s “Don Juan” and “Till Eulenspiegel” attest. One never knows quite what to expect: spontaneity is the rule.


Could modern performers recapture Furtwängler’s elasticity of style? Most likely not. Scholars such as Robert Philip and Kenneth Hamilton have shown how the advent of recording permanently changed the way music is played. Effects of rubato and portamento—bending the tempo, sliding from note to note—sounded messy when heard on disc, and they were already passing from fashion in the mid-twentieth century. Taruskin writes, “Most of the performances in the present set would be regarded as far too sloppy for commercial release today.” The recordings bear witness to a pivotal moment: they capture an older musical tradition operating at maximum force, before it became fully conscious of its own sound.

The ultimate contradiction is that this music from an inhuman time has a desperate humanity—an emotional recklessness and nakedness. No one registered such a contradiction at the time. Hitler admired Furtwängler precisely because of his inward conviction, which the dictator valued above the more disciplined approach of Hans Knappertsbusch or Herbert von Karajan. In the end, these recordings make it disconcertingly clear that humanity is a neutral condition, capable of encompassing beauty and horror in the same instant.