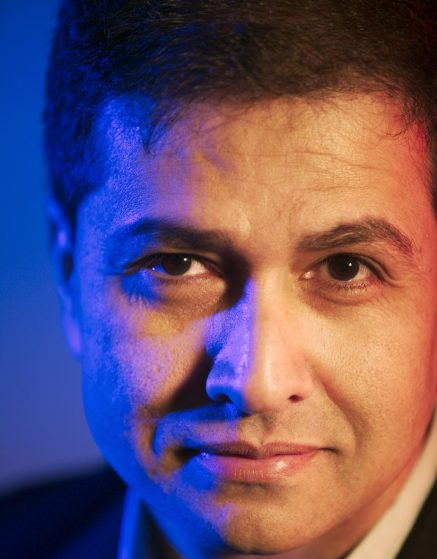 We spoke the other day with Indian composer Param Vir, whose recent work, Cave of Luminous Mind, takes the writings of the 11th century Tibetan saint and poet and has created a work about the state of enlightenment. Milarepa’s thoughts on the breath and creating a meditation technique based around the in-breath and the out-breath inspired Mr. Vir to create a modern work where glissandos stand for the breath. The work was commissioned by and received its premiere at the BBC Proms in 2013.

In addition to Milarepa’s philosophy, Mr. Vir was also inspired by a visit to the famous Aquarium at Monterey Bay, California. The Aquarium’s sea tank, which opens a wall of the building directly onto the Bay, is a viewing platform for sea life in nature. The shafts of sunlight and the fish shimmering in that light becomes part of his work as well.

His 2008 work, Black Feather Rising, takes a Native American legend and turns it into a phenomenally strong piece of music theatre for 2 singers and a small ensemble. By placing their love story into the background, Mr. Vir has created a work where we focus instead on the elemental world and being able to hear the song of Nature. The importance is the primacy of human desire, our own internal quest for completeness.

In this scene, soprano Charlotte Tiedijk (West-Wind-Rising) explains to Alistair Shelton-Smith (Raven Caller) the actions he must take to restore himself to what he once was.


It’s very modern vocal writing, but very effective, conveying his bewilderment and desire for inaction and her urgency for him to take action.

The latest piece he’s been working on is Drum of the Deathless, given its premiere in November 2016 in South Korea. This “Ritual for Four Percussionists” has been transformed twice: next as a work for 5 percussionists and lately as a work for 2 percussionists. When we spoke about the reduction to two players, he said that he only had to make 1 addition to that version – adding 1 bar so that a percussionist could get to his next instrument in time!

Param Vir – Drum of the Deathless

We spoke at length about his work Raga Fields: Three Spaces for Sarod and Ensemble, and the problems bringing together a purely Indian instrument with a western orchestra. The sarod has 17-25 strings, with 4-5 main strings for playing the melody, 1-2 drone strings, 2 chikari strings, and 9-11 sympathetic strings. The metal strings are plucked with a wooden or bone plectrum.

The primary problem was that sarod players are not taught via western musical notation – they learn by rote from their teachers. For the premiere, the sarod player was taught his music by the repetiteur. For other sections, the composer could ask the sarod player to improvise as a way of getting around the fact that he couldn’t read music. Even today, Soumik Datta is the only sarod player who is capable of performing this piece.

Raga Fields in Vienna – extract from the finale

Mr. Vir noted that with the increasing interest in Indian music, Indian composers are often approached by European ensembles to write that most beloved of Western genres, the concerto, but without taking into consideration that it is not an Indian genre. This, unfortunately, has resulted in a kind of pastiche of movie music for classical ensemble, which is to the satisfaction of no one. No pieces of stature have come from this mix. Often in his pieces, Mr. Vir has to add the notation “Make No Attempt to Sound Indian.” Western music can take Indian characteristics, but he wonders how Indian music will become Western.

Future projects for Mr. Vir include an opera on the life of Buddha, a project that has been simmering in his thoughts for the past 25 years. When we spoke he was just back from the Holland Festival – not as a performer but as a listener.