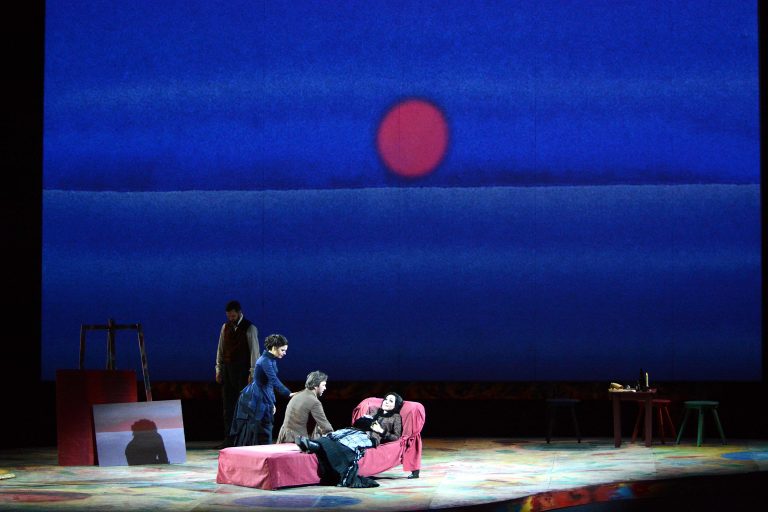 I journeyed to Torre del Lago for the Puccini festival 2017 to hear La Bohème on 30th August, the last night of the festival. The 63rd Festival Pucciniano featured the Tuscan verismo maestro’s popular works Bohème, Tosca and Butterfly as well as Turandot and La Rondine on the fabled stage of the “gran teatro all aperto Giacomo Puccini” in Viareggio. In addition to this, in this festival, homage to France was a symphonic concert of the Opera of Nice and a Ballet, a contemporary opera Jeanne D’ Arc, a lyric gala and three performances of Notre Dame de Paris. In addition to this, there were performances of La Voix Humaine and La Traviata. La Bohème was produced by a visiting Russian company, the Kolobov Novaya Opera Theatre of Moscow.

Picture the scene; after dining on crisp fried calamari and zucchini at the lake side restaurant, it was a short stroll to the make-shift stage on the lake. As the moon appeared on a clear night, the stars shone to reveal the iridescent lake in the far distance. At the stroke of 9.15 pm, the conductor appeared to launch the opera with its characteristically jaunty opening theme. British born conductor Jan Latham-Koenig displayed complete control over the orchestra forces. The orchestra and chorus of the Opera Novaya were a little reticent to start with. By the end of Act Two they were revelling in Puccini’s glorious melodies.

Mimi’s death scene was very moving, ending the opera on a poignant note. The crashing chords died away into the night as Rodolfo’s screams of Mimi’s name ended the opera shatteringly.

In Act One, Che Gelida Manina was sung by Aleksey Tatarintsev. He had a compact tone and gentle leniency to the sound. Unlike most Russian tenors, it was not a large voice but mainly well focused and clear. Mimi was sung by Elizaveta Soina. She had a more powerful voice and a large vibrato making an excellent effect in her Act One solo both in lyric passages and parlando. The tenor and soprano combined beautifully in the duet O soave fanciulla ending Act One with a unison top C.

Act Two was made lively by the children’s chorus singing Parpignol and Musetta’s waltz Quando m’ en vo by Victoria Shevtsova. She had a small but bright voice with a lot of character in her sound.

Mimi’s Donde Lieta and the Marcello Rodolfo duet were two remaining highlights both beautifully sung. Colline’s Farewell to the Coat was touching in its melancholy and sonorously sung by Evgeny Stavinsky. Mimi’s death scene was very moving, ending the opera on a poignant note. The crashing chords died away into the night as Rodolfo’s screams of Mimi’s name ended the opera shatteringly.