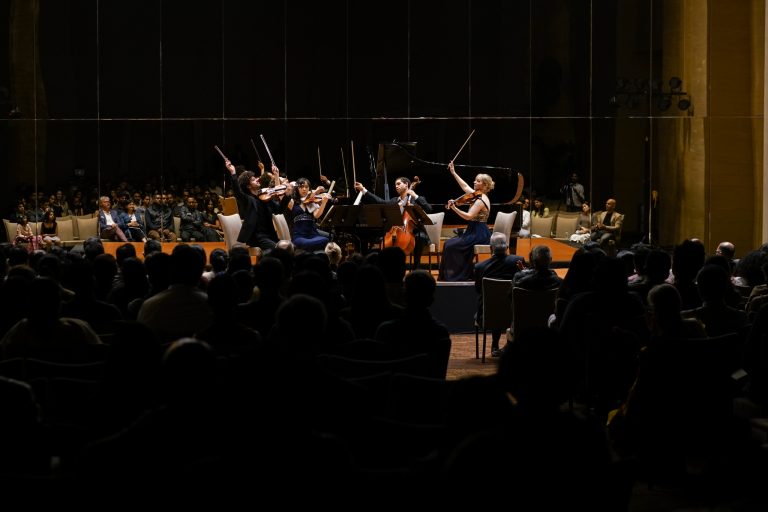 This first edition of the SOTA festival that took place from January 2 – 6 2018 in Hyderabad is the brain child of local pianist, executive and artistic director, Timothy Marthand. It is the culmination of over 25 years of research and collaboration with renowned artists and an ongoing commitment to music education. SOTA stands for state of the art and as Timothy explains to the audience in his inimitable yet casual style –

“making music at a high level is a dream for many and it is also very simple, given the right resources”.

The festival kicked-off with a delightful chamber music evening. The venue was the Westin Hyderabad Mindspace, in a banquet hall, which served as a make-shift concert hall, seating 500 people. It was not the ideal acoustic for chamber music and the internal balances between strings and the piano was sometimes dodgy in both the chosen works.

The Trout began a little tentatively until the soloists found the appropriate internal balance. This quintet was for the unusual combination of four strings-violin, viola, cello, double bass and piano. The Italo- Persian pianist Alessandro Deljavan had a light and deft touch which was entirely beguiling. Never did he force the tone or shine in the lime light of virtuosity-a true chamber musician. Violinist Daniela Cammarano had a very silken soft tonal quality-she could do with a stronger attack at times, without compromising on the beauty of sound. The fourth movement (the theme and variations movement based on the eponymous song, The Trout) was played with great attention to detail; with the theme passing gently from violin to cello and piano. Cellist Oded Hadar from Israel basked in the glory of his melody with luxuriant tone and effortless phrasing. On Viola and double- bass, Matt Cosul and Patrick Duff leant for a strong support. All in all, it was a tender winning performance.

After the intermission, the more conventional formation of string quartet joined world renowned pianist Martin Helmchen in Schumann’s piano quintet, a jovial, optimistic and mature work, full of wonderful melodies. This pianist had an arresting sound and played the work almost like a concerto. Led strongly by Kobi Malkin at the violin, this piece was always rhythmically alert but could have done with more nuances. Hot on the heels of a very successful chamber music evening was the orchestra concert which included Grieg’s Holberg suite and Beethoven’s towering third piano concerto. This programme was performed on the 3rd and 4th January 2018 again at Westin Hyderabad Mindspace as part of the SOTA festival.

Originally written for piano solo, this was later scored by Grieg himself for a string orchestra. Led by Kobi Malkin on the violin, the international roster of soloists got together specially for this festival, forming the Camerata Hyderabad.

And then came the piano concerto no. 3 by Beethoven. The nine strings of the Camerata Hyderabad served as a replacement symphony orchestra. Given the limitations of the absence of winds and brass, the chamber acoustic suited this performance. The wind parts were cleverly appropriated by violas and cellos and the ensemble was kept together tightly by Daniela, who was leading the strings. Martin Helmchen was the soloist and acquitted himself admirably. There was no limit to his technical mastery with every single note perfectly in place; with the fireworks in Beethoven’s cadenzas electrifying. My only disappointment was to criticise his lack of tonal variety especially in the slow movement. Instead, he preferred to use agogic distortions. Nonetheless, it was a scintillating and dramatic performance. This was followed by a captivating performance of a Schumann Novelette.

By any standards, this festival can hold a candle to chamber music festivals of its kind, anywhere in the world. I was unable to attend day four, 6th January, when they were supposed to play Schubert’s Grand Duo and Franck’s violin sonata capped by Chopin’s second set of piano studies by two Italian musicians. I look forward to the second edition of the SOTA resonance music festival.