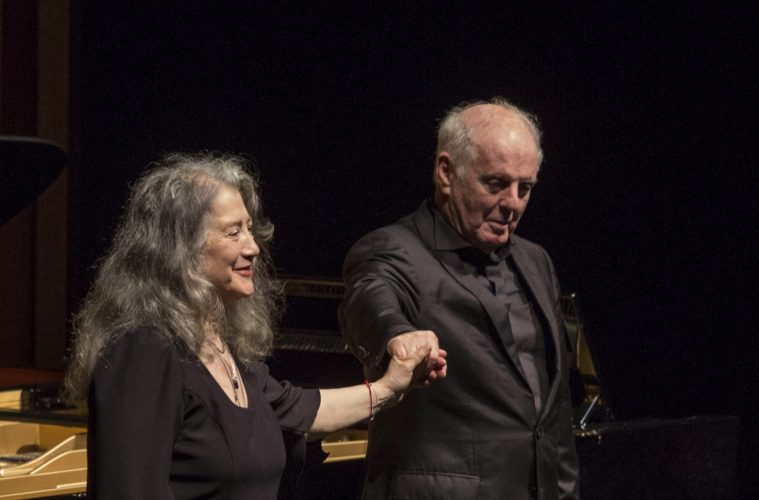 MY FIRST NIGHT AT THE SALZBURG FESTIVAL 2017

There is an air of extreme anticipation in the buzzing little city of Mozart’s birth, Salzburg. The French president is in the city and is expected to be at the concert of the evening of 23rd August. This is a soloist concert in the late evening at the Grosses Festspielhaus. In the line-up of musicians tonight are pianists extraordinaire Martha Argerich and Daniel Barenboim in a duo piano recital. The first half of the recital contained Mozart and Schumann and the second half was all Debussy.

Mozart wrote Sonata in D major K 448 for his piano pupil Josepha Auernhammer saying of her “the young lady is a fright but plays enchantingly”. This concerto-like sonata gives equal opportunities to both pianists in virtuosic and melodic passages. The first movement starts with an arresting fanfare in D major and almost immediately takes over into rivulets and cascades of scales and arpeggios in semi-quavers thrown back and forth between the two pianists. The second half begins with a most sedate fugal theme returning to the opening material after much modulation. Here Barenboim took first piano and displayed immaculate technique and nuance. He had a beautiful singing line in the slow movement’s main theme. Equally delicate and beautiful was Martha Argerich’s every retort. Martha Argerich on second piano played the new theme at the beginning of the middle section with great gentility and sparse movement. The two pianists ended together with the gently moving undulations of the slow movement. The last movement’s sprightly main theme is introduced by the first piano. There are melodic interludes and continuing semi quaver figurations right through the movement which keep it lively and full of brilliance. The two pianists matched each other note for note measure for measure phrase for phrase in this uniquely beautiful work written and premiered in Vienna in 1781. After this work came two more works for piano four hands (in F major and C major) but none other for two pianos.

After the Mozart came Schumann’s Six Studies in canon form for pedal piano op 56 arranged by Claude Debussy. In 1845 about ten years before Schumann died he received a pedal piano admitting a “fugue passion”. Robert was dedicating himself to a study of counterpoint specially that of Bach. The first piece is most Bach like. The next studies are romantic in expression, very Mendelssohn like. The fifth one is a delightful staccato articulated miniature march. The last of the set is a serious short fugato.

The second half was pure Debussy first the suite for two pianos En blanc et noir (In black and white) referring obviously to the piano keys. Initially called Caprices that title was dropped because of its enduring dark nature reflecting Debussy’s mood during the world war and its relevance to the etchings of Goya by the same name. The first of the three pieces- avec emportement (angrily) is an open rebuke to those who are not fighting for their country. The waltz like theme keeps repeating like a rondo finally ending the movement with unmistakable jubilant energy. There is no doubt about the patriotism and often dark sentiment of the second piece. After an ominous introduction with the rumbles and bugle calls of war there is a peaceful episode of French song and ethereal piano colouring. The last piece is no where near clear as expressive. Dedicated to Stravinsky and marked scherzando suggest that it will not be the darkest of the three movements. Its similarity in style of composition resembles more that of Debussy’s next major work the twelve etudes. I will not spend more time on the last work of the programme – La Mer (Trois esquisses symphoniques). This was the least convincing as it was originally written for orchestra and women’s chorus. The arrangement by Debussy himself was fascinating in its light and shade and shimmering colours evoking a representation of the sea in its many guises. The encore again was Impressionism at its height. The Prelude a l’Apremidi d’un faune. This was played beautifully and serenely with the opening wind solo projected to the far end of the hall by Barenboim supremely unique touch and nuance.

This is Fareed Curmally at the Salzburg festival, reporting live and covering highlights of the last week of the festival. This was an auspicious start with an outstanding concert in some unusual music for piano duo. For the first three pieces the pianos were in mother father position whereas in the La Mer the pianists were side by side making coordination easier. A great start to my week-long sojourn in Salzburg!