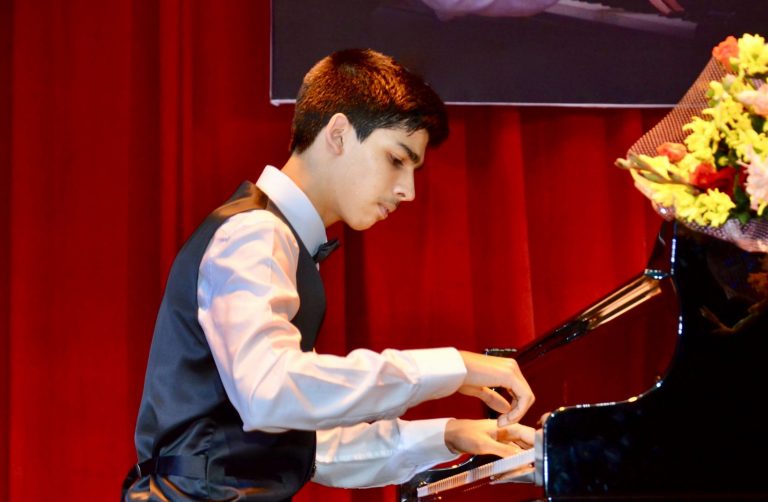 I first heard Milen Manoj, the genius Indian pianist, in his debut recital at the NCPA in April of this year. He impressed greatly in a varied recital which included the Appassionata sonata. He seemed to me then to have tremendous potential, but I hardly imagined the complete transformation that occurred last month at the Russian Centre for Science and Culture. It was a miraculous evening of music making of the highest order, truly astonishing in a boy so young and that too an Indian. And now you must understand that I do not mean that in a patronising way at all. It is true, I have heard many pianists of Indian origin whether or not born and trained in India but none as astonishing as this young sixteen year old from Thrissur. The recital began with Faure’s Theme and Variations Op 73. The theme itself was played with a deft touch and gentle romantic feeling, never over doing the sentimentality that is often the pit fall of many a seasoned artist. The variations unfolded with greater complexity returning to the main theme for the end. Ravel’s fiendishly difficult suite, Gaspard de la nuit, followed. The technical difficulties were brushed aside as if amounting to nothing with the rivulets and cascades surrounding the water nymph Ondine, sparkling with brilliance. The deathly silence and knolling bell of Le Gibet was stark and bare. It was quite astonishing in its grasp of rhythm which was perfectly steady yet natural. The last movement depicting the devilish naughty puckish character Scarbo was hair-raising in its intensity and vigour.

This was followed by another virtuoso piece – Liszt’s Mephisto Waltz No 1. This was played with an abundance of character and technique. This suited Milen most of all and I couldn’t help thinking that this repertoire suits him in better than what he chose for his debut recital i.e. Beethoven’s Appassionata and Chopin’s first Ballade.

An Invitation to the world of Hungarian Operetta

If you have not heard this young pianist play, you must make a trip to the concert hall which I promise will be unforgettable. On the 23rd of this month he is scheduled to appear at the DAE Sports and Cultural Centre, Anushakti nagar, Chembur. He will play a difficult and appealing programme including Tchaikovsky’s Dumka, Chopin’s first Ballade, Liszt’s Mephisto Waltz no 1 and Balakirev’s the Lark and Islamey. It is a programme of show stopping encore pieces designed to bring the house down. Those with a sweet tooth will enjoy it immensely. Go and have fun!