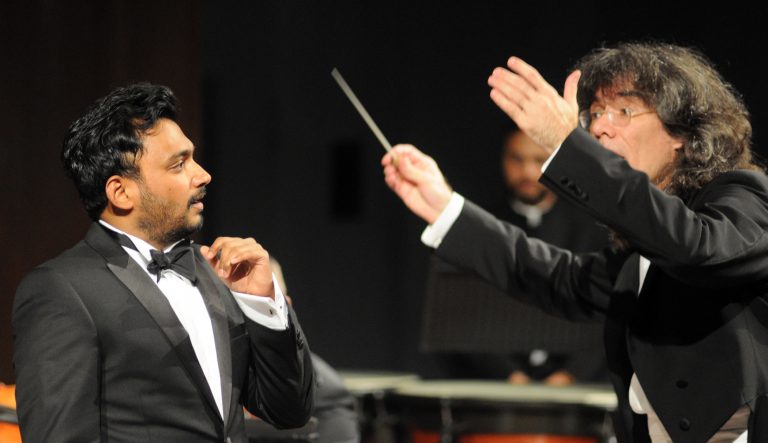 I was fortunate enough to hear Amar during both his performances in Mumbai, this year. Had I only heard him during his first appearance on Saturday 8th July, this would have been a lukewarm review. This was because his second performance was much better than the first one. The Prithvi acoustic was perfect for his light and small voice. He opened the concert with a near ideal Lensky’s aria from Eugene Onegin by Tchaikovsky. The intertwining woodwind phrases blended mellifluously with romantic ardour in his voice. The voice itself was a touch dry and grainy. However, this suited the repertoire in hand with the high notes ringing out freely. The chamber orchestra of the SOI under Maestro Evgeny Bushkov was in excellent form and helped Amar settle down immediately.

Let me get my main bête noir off my chest now. It is to do with Amar’s choice of repertoire. A self-proclaimed lyric tenor, he has eschewed Mozart, light bel canto and early Verdi completely, going full-throttle for the big verismo bonbons. It is alright and he has just about got away with it in a short recital of excerpts but at this stage he would do well to steer clear of the complete roles. After singing eight arias, almost without pause, he was visibly shattered and so were we, with the wide range of emotions generated by the characters ranging from Mascagni, Cilea, Puccini, Verdi and Massenet. Fortunately he was not tempted to sing Federico’s Lament from Cilea’s l’Arlesiana. He did choose to sing La dolcissima effigie from the same composer’s Adriana Lecouvreur, which he sang with great beauty of tone, starting in the high head register with full sound instead of a covered mezza voce. He ended with a glorious rising crescendo to a top B flat with the timpani crash and freedom of sound. He sang Apri la tua finestra from Mascagni’s little known opera Iris with abundant confidence but the pizzicato orchestral accompaniment turned out to be a risky business with intonation.

Torna ai felice di from Puccini’s little known first opera Le Villi is a beautiful gem sung with sumptuous voice. In many ways Quando le sere al placido from Luisa Miller was the most successful one with plenty of lyric head voice and minimal forcing of tone. On the second day, he added an emotional sigh at the end which was not necessary and he ended with a highly charged rendition of Massenet’s Pour quoi me reveiller from Werther making an impassioned end to the official recital. Two encores followed, Rinuncio’s aria from the second opera Gianni Schicchi from Puccini’s triptych Il trittico and Amor ti vieta from Giordano’s Fedora. No Andrea Chenier as yet please but why not some Donizetti (Com’e gentil from Don Pasquale or Una Furtiva Lagrima)? This is not meant as a criticism but as a suggestion.

In summary then, Amar had a fresher voice on Monday at the Prithvi theatre at Juhu, where the bijou amphitheatre made for an excellent acoustic. The orchestra was in hyper-sensitive form reacting to every movement of Maestro Bushkov’s baton. Amar has a beautiful light high lyric leggiero voice which he would do well to steer away from heavier roles which I know he is not singing at present. Apart from Tamino in Mozart’s Magic Flute, he has done no other roles except for contemporary and little known repertoire. He should restrict his appearances in the current repertoire he has chosen as I know he will not attempt any of these roles for a long time to come. Let us enjoy the beauty of your lovely light voice without much forcing. Your ease with languages and excellent diction is definitely a plus point. Have you thought of adding operetta and the light Berlin 1920’s operatic hits to your repertoire? In my opinion, you have successfully passed the piano accompanied German and Italian song repertoire in your previous two appearances in Mumbai. This concert is yet another feather in your cap.