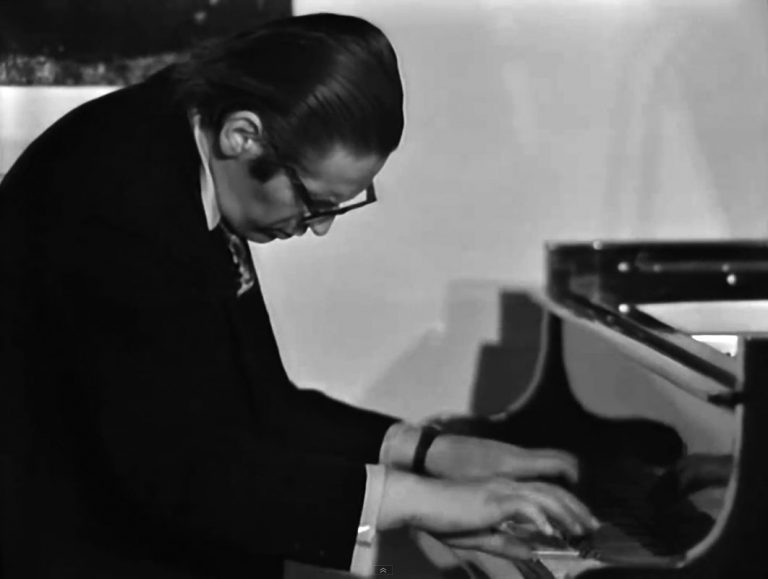 The first time I ever heard the jazz pianist Bill Evans (1929-1980) was on his duet recording of All Across the City, with the prominent jazz guitarist Jim Hall, from their 1969 album Intermodulations. This happened to be at the tail end of a cassette tape borrowed from my cousin Anmole. In those days, you could typically transfer the contents of two long-playing record albums to a 90-minute cassette, with the precious remaining five minutes of tape used for an extra track or two. I can’t remember what preceded All Across the City on this particular tape – it could have been a completely different Chick Corea album, or a John Abercrombie session.

I quite enjoyed All Across the City at first hearing. At that time I was much more interested in what Jim Hall was playing on it, with the piano apparently only providing background color, but the sonic balance between both instruments seemed outstandingly well-done. I tried to learn some of Hall’s phrases off that tape, though I didn’t then have the harmonic capability to understand his chordal playing, or to try and emulate Evans’s piano work on a guitar. There was no way at that time to obtain the entire album, let alone a written transcription.

I could imagine, even then, that the harmonic scope of the piano far surpassed anything that the guitar could do. My own early approach to the jazz guitar was largely based on single-line plectrum work, influenced heavily by John McLaughlin and Al Dimeola, despite the skepticism of my brother Jeta who hoped I’d move to a more tonally complete playing approach at some point. I’d figured out how to name chords with extensions, but had little understanding of progression, substitution and re-harmonization.

My early exploration of basic classical guitar repertoire provided a glimpse of the possibilities that could open up with fingerstyle technique. I realized that I could at least approximate some sort of “pianistic” texture if I played with my fingers, and applied that to some of the less exuberant solo passages by Keith Emerson from the ELP album Trilogy. But that was about it.

In late 1989 I heard Bill Evans for the second time. This was his album Trio 64 featuring Gary Peacock on bass and Paul Motian on the drums in 1964. I was archiving the original spool tape recording to cassette at the National Institute of Design, and heard the album only once through while doing the transfer. It was interesting, but I couldn’t find any potential connection with the guitar, or at least with how I played the guitar then.

In the next few years, I didn’t encounter any Bill Evans albums. My listening exposure to the jazz piano was largely through the work of Chick Corea, which provided considerable opportunities for guitar emulation. In the 1990s the little garage band I had with Ashish Manchanda, John Lucksom and Nikhil Sohoni worked its way through many Corea compositions, sometimes even with a fair degree of success. Of course, the harmonic aspects of these sessions were based on pure approximation.

I met Rosemarie Eilert in May 2006. One of her first questions to me, upon her realizing that I did have some sort of jazz guitar style, was – “Do you play slash chords”?

Now I had, admittedly, heard of “slash chords” (which is a jazz musician’s parlance for compound chords), but had not paid serious attention to them. For me, chordal notation such as A-/D (orAmin/D as alternatively notated) implied playing an A-minor triad somewhere on the fingerboard, and using any available finger to hack desperately at the nearest D below it (or better yet, leaving that D to the bassist). There was no thought given to actually combining the two triads, finding voicings that blended both of them, or putting them in context in a harmonic flow. But then, given the standard tuning of the guitar and the limited number of notes available at hand this is difficult to do at best, anyway.

Rose already had a long-term interest in the work of Bill Evans, and was keen to continue interpreting jazz in his style. Unfortunately, apart from two duet albums and a few ensemble recordings with Jim Hall, there was a notable lack of guitar in Evans’s work, leaving me with little to do. We did attempt to perform All Across the City as a duo, and ploughed our way through Waltz for Debbyon which I played a fret-less bass guitar. Apart from my unreliable intonation on that bass, the complex harmony of the latter piece was very far beyond my capacity to follow in real time.

I proceeded to borrow some Evans albums from Rose and bought a few more as well. It was apparent that there was little a guitarist could do with a pianist who sought to emulate the vast harmonic Evans palette while staying within the overall compass of largely acoustic mainstream jazz. It was necessary for me to change instruments and to move to the bass if I hoped to participate extensively in this increasingly fascinating genre. I wasn’t sure how I would approach the bass theoretically and technically, given my lack of formal training in jazz theory harmony. Rose frequently used terms such as “tritone substitution” which left me completely baffled.

Then I came across the 1977 album You must believe in Spring by Bill Evans. This session, with Eddie Gomez on bass and Eliot Zigmund on the drums, was actually released after Evans’s death in 1980, and is a representative showcase of his late-period piano style.

I was intrigued. Gomez was playing free-form bass passages that effectively countered the sparse, introspective piano texture, rarely resorting to either conventional walking bass patterns or high-speed improvisation. Zigmund’s drumming was noticeable by its frequent absence, or by being present only just above the threshold of hearing. Every track on the album, including their interpretation of Theme from M*A*S*H*which was by then a Bill Evans staple, demonstrated ensemble expressiveness at its finest. And I realised that, instead of worrying about complex harmonic computation, I could hope to play this music by ear and textural judiciousness. Eventually, that is.

I gained more confidence as mainstream jazz bassist over time by practicing and performing frequently with Rose and learning about harmony and detailing from her. Shifting to an electric upright bass helped significantly, as this instrument provided a cantabile and almost horn-like character that essentially worked along rather than across the strings. While substantial harmonic study was still required, the process was facilitated for me with a complementary aural approach. Two duet albums that Evans recorded with Gomez (Intuition and Montreux III) became regular listening, with their complex interaction between the musicians, free timekeeping, and dynamic contrasts not typically heard in jazz. I came to actually prefer this duo tonality to the more usual trios that Bill Evans led. This format was used by Rose and I for our first performance for the Poona Music Society in 2011.

In recent years, I have been listening more closely to Evans’s piano work. There is an entire lifetime of learning embedded there, regardless of what style or instrument one plays. He brought unprecedented sophistication and authority to the jazz piano, and is appropriately regarded as one of the most important figures in the history of jazz, still highly relevant to musicians today. His controlled approach to timekeeping (including his well-considered use of rubato – which appalled jazz traditionalists at the time), textural control and dynamic expression is also useful listening for classical musicians. Bill Evans provides an interesting musical link between the two worlds of mainstream jazz and Western classical music, with his own Chopin and Debussy influences being markedly evident in his work. Even for a classical guitarist, the effortless fluidity with which Evans plays his single line phrases and shades his block chords can suggest a vast library of expressive possibilities, particularly with right hand guitar technique.

The large number of albums recorded by Bill Evans as a leader, and his own contribution to sessions by others such as Miles Davis, showcase a musician who was constantly seeking and evolving, never content with his own achievements. His early performances on the legendary Kind of Blue sessions in 1959, led by Davis, reveal what was by then already a responsive and reflective piano style. He went on to lead his first trio with Scott LaFaro (bass) and Paul Motian (drums), notorious with its distinctly “non-jazz” flavor. Their interpretations demonstrated collective improvisation, with an equal role given to drums and bass, without much of the conventional rhythm section in evidence. Over the years, Evans worked with several bassist and drummers, constantly refining his ensemble style. His last few recordings with Gomez, Zigmund, Marty Morrell (drums), Joey LaBarbera (drums) and Marc Johnson (bass) indicate to me, tantalizingly, that Evans could have taken jazz piano into further unexplored territory had he lived for another decade: virtuoso improvisation, yet with the wide and controlled expressive scope that is normally heard only in Western classical music.

Looking back at the enormous recorded legacy left behind by Bill Evans, one point stands out. He largely chose to record and perform music by others, including some jazz “standards” and even non-traditional sources such as Michel Legrand and Claus Ogerman. However, his own written material remains somewhat less well-known, despite having a high degree of inherent expressiveness, improvisational possibilities and compositional completeness. My performance with Rose on 14 January 2016, with the kind support of the Poona Music Society, presented some of his own writing as piano-bass and piano-guitar duets.

Revised and republished with permission from the Pune Guitar Society