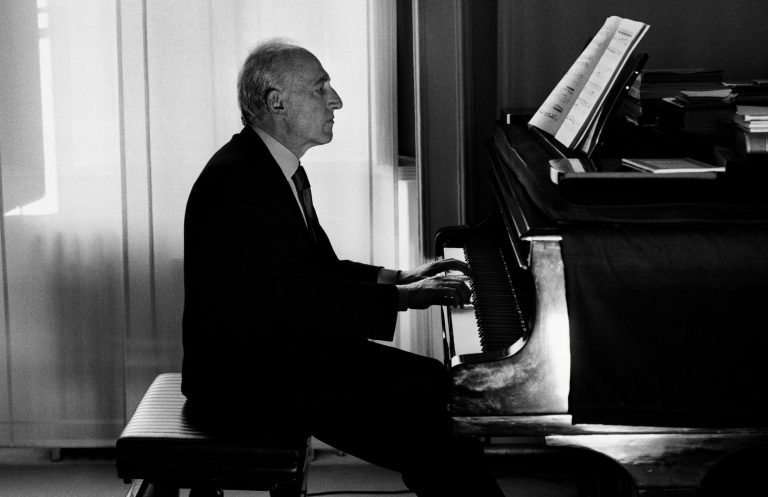 POLLINI RAISES THE RAFTERS AT THE FESTIVAL HALL

There is no doubt that Maurizio Pollini at age 76 remains one of the world’s great piano virtuosos. This was manifestly proven in the March 12 sell-out concert in the international piano series here in the Southbank Centre’s Royal Festival Hall in London. Pollini has had a long and illustrious career since winning First Prize in the 1960 Chopin piano competition. His name is most associated with the solo piano music of Beethoven (he has recently completed recording all the piano sonatas for DG), Schubert, Chopin, Schumann, Brahms, Schoenberg, Webern and modern Italian composers. Rubinstein on the jury of the Chopin prize remarked that “that boy can play the piano better than any of us”. He then recorded Chopin’s first Piano Concerto with the Philharmonia conducted by Paul Kletzki for EMI after which he experienced “an apparent crisis of confidence” (in the words of Peter Andry producer for EMI). Pollini then went on to study with Arturo Benedetti Michelangeli from whom he has said to have acquired “a precise technique and emotional restraint”, although some have expressed that Michelangeli’s influence resulted in Pollini’s playing becoming “mannered and cold”.


While some of this may still apply to Pollini’s playing he is still capable of a revelatory performance. I last heard him some twenty years ago in a Salzburg recital where he played Schumann’s Fantasie and Chopin’s Preludes when his technique was flawless. Earlier this month he chose to play a selection of Chopin in the first half and Debussy’s first book of Preludes after the interval. He started the evening with the two Nocturnes op. 62 in B major and E major. They were both written in 1846 just three years before Chopin died and were his last published nocturnes. These two are very similar in their liquid legato melodies with a profusion of trills and figurations. It was clear from the start that here was a master interpreter at work. There were a few minor blotches but enough to remind you that the pianist is not his younger self any more. The Polonaise Op.44 in F sharp minor dates from 1841. This dance form provoked in Chopin the greatest outpouring of both pride and nostalgia for his home land. Liszt described op. 44 as “the lurid hour that precedes a hurricane”. This Polonaise is a long-time favourite with Pollini and received a robust performance if sometimes over-peddled. With the Berceuse in D flat major (1843) (originally called simply Variations) Chopin elevated a lullaby into a scene of limpid tenderness. The gently rocking and unchanged ground-bass in D flat in the left hand allows the right hand to fly across the octaves with no fewer than sixteen variations filling the air with ever more dazzling and daring roulades of the utmost delicacy and beauty. Here Pollini displayed complete control of the instrument. The pin drop silence as the audience held their breath! The Chopin group ended with the third Scherzo. Here again the virtuosity was fully in the service of the music but some passages were a bit rushed.

By contrast the second half was a revelation. The Debussy Preludes (Pollini chose the more familiar first book) require a different sort of technique than do Chopin’s shorter pieces. Debussy highly revered Chopin and derived some of his inspiration in his own preludes and etudes from the latter’s music. The book was not necessarily meant to be played as a cycle but what’s striking is the way Debussy orders them creating maximum dramatic impact. In his own words “there is no theory. You merely have to listen. Pleasure is the law.” But this however gives very little idea of the meticulousness and effort of creating the music that sounds so effortless.

Although visibly tired Pollini sat down again for two encores. First was “Feux d’artifice” the last prelude from book two which received a staggering performance. Chopin’s first Ballade followed receiving rapturous applause. This piece he has probably played many hundreds of times yet it retained its freshness and great lyrical beauty as if newly discovered.

All in all it was a pleasure to hear fine piano playing of the highest order although clearly no more a fire-eating virtuoso. What Pollini lacked occasionally in finesse he more than made up for in depth of interpretation- a sublime mastery of the piano’s capabilities.