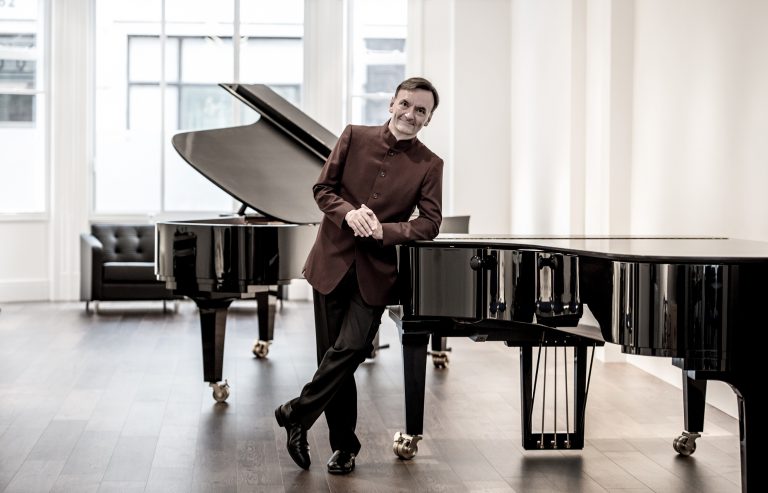 Stephen Hough’s piano-playing is enhanced by his work as a composer, writer, painter, cultural blogger, activist, poet, novelist and professor of music. By Karishma Attari

Stephen Hough is a British-born, internationally acclaimed pianist, who needs little introduction in classical music circles. His major accolades suggest his mastery of the piano is beyond contest. He was the first classical performing artiste to win a MacArthur genius grant in 2001, and has been honoured as Commander of the Order of the British Empire by Queen Elizabeth II in 2014. He has performed sold-out recitals across the globe, including in Chicago, Hong Kong, London, New York (Carnegie Hall and Lincoln Center), Paris, Boston, and San Francisco. He teaches music, and is on the faculty of Juilliard.

Hough has a solid body of work behind him in the form of recorded albums and composed pieces. He has composed works for orchestra, choir, chamber ensemble and solo piano. His Mass of Innocence and Experience and Missa Mirabilis were respectively commissioned by and performed at London’s Westminster Abbey and Westminster Cathedral. He has also been commissioned by the musicians of the Berlin Philharmonic, the Gilmore Foundation, London’s National Gallery, Wigmore Hall, the Louvre and Musica Viva Australia among others. Several of his 50 recorded albums have been awarded international prizes.

However, for all the emphasis that is put on recognising specialisation and celebrating individual genius, he is perhaps best understood as one in a long tradition of renaissance artistes. He has been named by The Economist and Intelligent Life as one of 20 living polymaths. It is a fair leap to suggest that his insightful playing is enhanced by his work as composer, writer, painter, renowned cultural blogger, queer activist, award-winning poet, novelist, and professor of music. When the December 2016 issue of Musical America recognised him as ‘International Artist of the Year’, it was for being not just a thinking musician, but “a kind of philosopher king whose demesne is all of art, and therefore, of life”.

In conversation with The Wall Street Journal’s Stuart Isacoff, Hough expresses how composing music for orchestra, choir, and solo piano is a different experience from playing the piano. Both are visceral and while they are complementary, composing music somehow seems the more intimate experience. He says,

“I love the physical feeling of playing the piano. But… composing… seems the most personal of all, because it is making something out of nothing. It’s an incredible feeling. It’s the difference, I suppose, between being a foster parent and having your own flesh and blood child. There is no less love – some foster parents are the most heroic and wonderful possible. But I imagine it is different for a woman to see the actual child coming out of her body. You can’t match that.”

The seeds are sown

Hough’s interest in the piano began early, from the time he was five, and taking piano lessons in Heswall (then Cheshire) in Britain. Much pleading led to him convincing his parents to buy a second-hand piano for 5 pounds from an antique shop. His love for the piano must have been immediate as is his continuing awe of it, as he states in an interview with Huffington Post’s Brian Horay.

“It’s an orchestra in the hands of one player. It can whisper, roar, and everything in between.”

Hough went on to study at the Chetham’s School of Music, and then at the Royal Northern College of Music. These early experiences went some way towards shaping his understanding of the role of a professional pianist. He expresses his gratitude towards his teacher Gordon Green at the Northern Royal College of Music in his interview with Isacoff.

“Gordon Green was the opposite of a ‘competition’ teacher,” he recalls. “He wanted you to make mistakes, experiment, go off in weird directions. When you enter competitions, you are immediately restricted. You have to play in a correct way; you worry if the jury will like you. Pianists who enter competitions have stopped having fun by the time they are 20 – they become old and stunted.”

This early exposure to the value of individual expression meant that he had a certain artistic and personal approach to competitions. It would bring him a surprising degree of composure when he played at the Naumburg International Piano Competition, in 1983, while a student at Juilliard. He remembers being largely unprepared and very relaxed, to the extent that he asked someone to keep his coffee warm in the cafeteria before going up to the concert hall and playing his piece. It is Hough’s claim that this relaxed attitude led him all the way to the Carnegie Hall stage in the finals. Hough went on to finish a master’s degree from Juilliard, where his studies were assisted by the receipt of the first ever Royal Philharmonic Society Julius Isserlis Scholarship for study abroad.

As a pianist, Hough is clearly intent on keeping experimentation alive and maintains an extensive repertoire. The variety of his programming may have him playing pieces by Mozart, Beethoven, and Schubert, but also salon pieces and late-Romantic music. His fluency and technical finesse apart, he brings an idiomatic authority to his pieces, without settling into a particular characteristic style. A reflective musician, he balances the precision of his playing with warmth and emotional interpretations.

His bias for the subjective is revealed in a personal essay for The Guardian, where Hough discusses his favourite performer of all time. He is inspired by Alfred Cortot’s playing, because he sees in it a vision beyond the academic or the theatrical.

“Cortot is sometimes referred to as the pianist who played lots of wrong notes. This is unfair, not just because he had a dazzling finger technique, but because he never allowed a striving for accuracy to distract him from the bigger picture. You can sometimes hear his mistakes, even in the first notes of pieces, but I find these fallible moments endearing: the pianist consumed by spiritual inspiration, oblivious of the physical risks involved.”

The awareness of a bigger picture remains at the forefront of Hough’s work. Perhaps this is what gives him, typically, positive critical reviews for his concerts, where he is celebrated “for channelling Beethoven”. His talk, titled ‘The Practice of Practising’, part of a BBC Radio 3 interview, suggests the discipline, self-examination, and forensic scrutiny he puts into his preparation in order to turn notes on a page into an effortless performance. He keeps in mind his teacher Gordon Green’s dictum,

“In practice, a perfectionist, in performance, a realist.” He also warns against the subtle dangers of practice – “Firstly not to play as if you’re onstage, filling the hours crashing through pieces without improvement. But the second, to get stuck in a practising mode.”

As a soloist, recitalist, and chamber musician, Hough has appeared with the world’s most famous orchestras, on the most illustrious stages, and worked with the most renowned musicians. A two-evening programme brings him to the NCPA this month with familiar favourites by Beethoven, Mozart, Debussy, and Schumann. An opportunity to listen to Hough is one that classical music lovers in Mumbai should not miss.

This interview was originally published by the National Centre for the Performing Arts, Mumbai, in the September 2017 issue of ON Stage – their monthly arts magazine.