I never know what I’m going to write until I’ve written it; but this time I’ve planned to write just exactly what you may be about to read. It is going to be a brief commentary on an event that took place on the 3rd of March, an event that was rather tentatively organised because our guest performers, were already booked to play at the Goethe Institute in Kolkata on the 2nd, and later at the Calcutta School of Music on the 5th, with projects at Newtown in between and which made us kind of the stuff in a sandwich; could be cheese or perhaps jam?

But I decided to go ahead. Who can resist the iconic Jennifer Heemstra and her exciting musical projects! Here she was, with four clarinetists and a program from Beethoven to Brubeck! Our Effem Ensemble, consisting of two violins, viola and cello, still in its ‘infancy’ having started only last August and with an offering of the Beethoven String Quartet opus 18 no. 1 in F major and a premier presentation of the Four Miniatures for Oboe and Strings by Hussain S. Mohamed was a summons not to be denied.

Our oboist Vachegan Tadevosyan was unfortunately not available during this week and so I wondered if  one of the clarinetists would to play it with the quartet. I asked with great temerity and was delighted when none other than Tasha Warren agreed! And that clinched it.

At very short notice, the charming Haimonti and the team of the Kawai Piano Store in Kolkata readily agreed to host us at the showroom on Tuesday the 3rd. However, nobody anticipated the deluge that preceded the musical event despite which, the small hall had a goodly attendance of adults and young students. Kolkata has known and loved Jennifer Heemstra for her talents as a versatile entrepreneur, and a brilliant pianist. She brought with her four clarinetists:

Tasha Warren is assistant Professor of Chamber music at the Michigan State University College of Music. She also plays the bass clarinet, a formidably large and beautiful instrument with a rich tonal range, never before heard in Kolkata auditoriums. Doctoral clarinet student Marissa Mitchell, clarinetists Mia Zamorra and Valerie Nuzzolo made up the team.

Apart from the Sonata for Clarinet and Piano by Poulenc, most of the music consisted of arrangements. However, these were delightfully structured and gave one an insight to the many possibilities of musical variance and enterprise. Their performing skills undeniably musical and joyful.

Our little Effem Ensemble itself consisting of violinists Pallab Pramanick, violist Subroto Pramanick and cellist Somnath Makhal gave a brisk and enjoyable performance of the first movement of Beethoven’s String quartet opus 18 no. 1 in F which was followed by a premiere performance of the Four Miniatures for Oboe and Strings (arranged for clarinet) by the Ceylon born British composer Hussain S. Mohamed.

I mentioned the deluge earlier. Just one of our team, the violist, braved the hail and rain and turned up sodden. His shoes full of water, he nevertheless played, proof of a sense of utter professionalism and the belief that the show must go on! The rest arrived early!

On the whole an evening of surprising musical spontaneity generosity of spirit and friendship. We look forward to many more. Thank you Jennifer and the Pitch Pipe Foundation, and to the Kawai Piano Store. 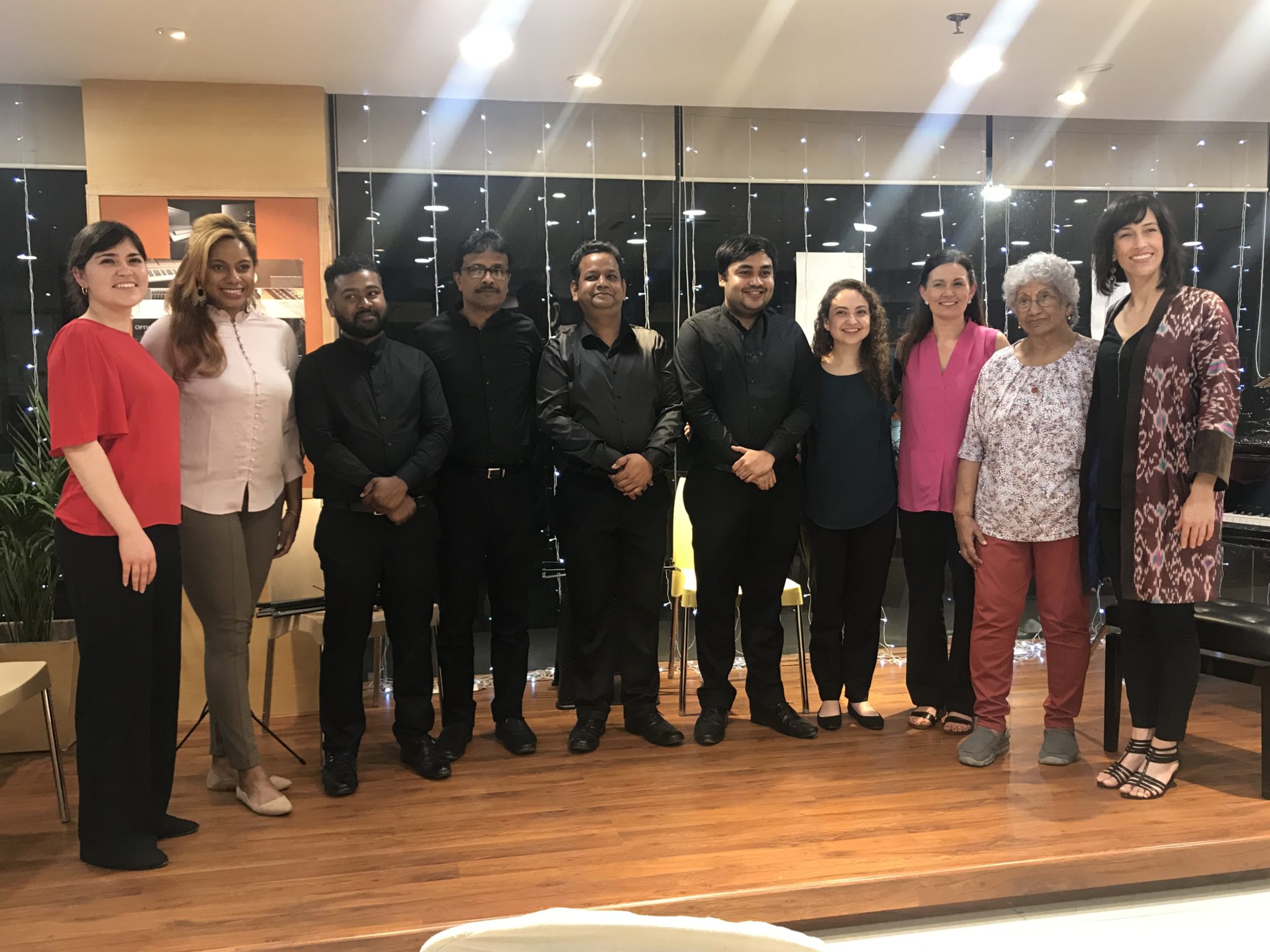