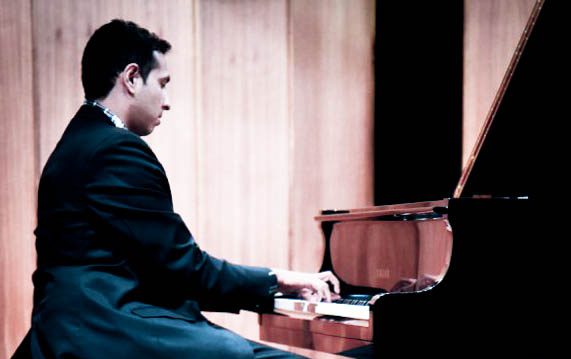 Teacher, classical pianist and composer, Tuhin Rao maintains an active studio in Pune where he offers lessons in piano performance, music theory, composition, music software, and music production technology. He holds an LTCL (Licentiate of Trinity College, London) diploma in Piano Recital, an LMusTCL (Licentiate in Music Theory) diploma, Kodály Music Teaching Degree and a Master of Science degree in Physics. His students have excelled with distinction in Trinity College Piano examinations (UK), the Royal Conservatory of Music Examinations (Canada) and in music theory examinations at the diploma level.

To keep up with current advances in music, Tuhin is a member and conference attendee of several associations like MTNA (USA), NCKP (USA) and WMEA (India).Tuhin gives workshops to several teachers and students on varied topics ranging from harmony, jazz, improvisation, pedal, practice and teaching. In collaboration with Musikshack Tuhin conducts a Music Festival – Musik Fiesta. This is a platform for students from all genres and instruments/voices to come and perform for an audience. The highlight of the festival being, that teachers too are allowed and encouraged to perform. Tuhin has a great interest in piano technology. Applying his knowledge of physics, he regularly tunes and voices his own piano in the quest to achieve the perfect sound.

Starting the studio in 2016 with one student, Tuhin (as of April 2019) has over 65 regular students and 20 ad hoc students from all corners of the world. The studio is also currently training 6 teachers to teach piano. They will start taking students from June 2019 onwards.

“The more energy you radiate to the student, the more the student will reciprocate it with progress.” – Tuhin Rao

In December 2018, the studio acquired a new Yamaha C3x Grand Piano. It is extremely important for students to experience playing on Grand pianos and not just baby grands, as the Grand Pianos give the optimal feel of touch and tone, which is essential for high performance standards.

“It is extremely important to let students know what goes on inside the instrument that they play. I let them touch and feel how hard the hammers-felts are and how soft the dampers-felts are. Then I let them strum the strings for them to feel them vibrate! They are all enthusiastic to play pieces in which ‘strumming the strings’ is written into the score! The most exciting part about this is that students are asked to use their fingers to stop string of the lowest A from vibrating. It takes a good 3 seconds for them to do so with tiny fingers.” – Tuhin Rao

The studio organizes 4 main recitals throughout the year.

Breaking from the traditional classical student recital, these recitals each have a unique flavor to it. Some are organized at Café’s where an acoustic piano is transported to for the concert. This creates a sort of informal atmosphere, but at the same time have professional standards of performance intact.

Many students host these recitals at their own place. The change of venue keeps the level of excitement up.

Besides the 4 recitals there are several studio performances throughout the year. These performances include student pre-exam performances, collaborations with other musicians with other instruments and impromptu concerts. The element of surprise always aims to keep repertoire at performance levels always.

All students play classical, jazz music, popular music and improvisation. Tuhin encourages students to compose and perform their own compositions at these performances.

It is quite difficult to get a recording environment in the city. The studio offers it’s piano and the room for house-style recordings.

Actively collaboartiing with the Pune Guitar Society, here is a snippet of a recording session of Jayant S & Rose E.

In April 2019, a live bi-monthly broadcast called ‘The Sound wiz’ was started. These short live sessions, featuring noteworthy performance of students and Tuhin and discussions of music history and concepts, is aired on Facebook live and YouTube. All sessions are available for later view. Introduced in April 2019, ‘the practice wiz award’ is a monthly prize given to 3 students every month displaying the most efficient practice and improvement. Being a believer in technology, Tuhin teaches lessons over Skype too. He has students in the USA achieving state level prizes for the highest marks in RCM examinations in their states.

A New way to learn

This V-lesson Whiz gives many independent learners, the flexibility of time and money. This is ideal for busy adults, young-adults and anyone who wants to learn without the commitment to regular lessons. It also is very pocket-friendly, saving more than 50% from the regular lessons. Tuhin is a member of several associations like MTNA, NCKP and WMEA and regular attendee to their conferences.

“Being a member of the MTNA for 8 years and counting going to the annual conferences in the USA has been the most influential times of the year. On the first day of the conference all sessions are based on pedagogy. These helps keep me updated in advances in teaching methods. The other advantage is networking. You get to meet new people and reconnect with old ones. I have created great collaborations and come out with great ideas through face-to-face networking. During the conference there are exhibition booths of all major music publishers, each offering huge discounts ranging from 10% to 50%. So, I have been to New York 2012, Las Vegas 2015, Baltimore 2017 and Spokane 2019.

Besides the conference the membership offers free webinars throughout the year along with an e-Journal. These are extremely helpful and very convenient as you can attend a seminar right from your house, rather than flying half way round the world. Also all of the webinars are archived so you can replay them as many times you want. Many of my workshop ideas emerge from these webinars. For just 99 USD annually, this membership is an indispensable tool to my profession.” – Tuhin Rao

Recently, India too has started its own association: Western Music Education Association (WMEA). Tuhin, actively participates in the WMEA and is a regular conference attendee.

Tuhin gives workshops on various topics. Here are snippets of some past workshops:

What the future has in store

A second edition of Musik-Fiesta: A festival in which teachers choose two of their best students to come and perform in one evening. It is one of the only platforms where teachers are expected to perform as well. This is open to all instruments/voice and genre. This event is hosted by Musikshack and is directed by Tuhin Rao.

Owing to the growing student numbers, the main studio is planning to shift to a bigger place by 2020. This new place will be able to house recitals with an audience capacity of 150-200.

The studio is committed towards bringing in experts from around the world to give seminars, workshops, masterclasses and concerts.