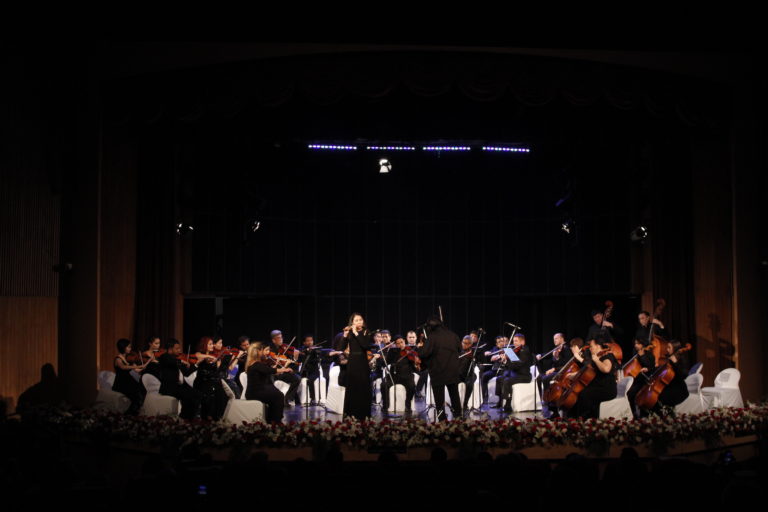 Standing ovations, encores and a growing realisation of the hunger for Western classical music in the country were all part of the resounding success of the SOI’s recent tour to Delhi and Bengaluru. Hot on the heels of a very successful Spring 2020 Season, the Symphony Orchestra of India (SOI) and Music Director Marat Bisengaliev embarked on a whirlwind tour to Delhi and Bengaluru, performing three concerts in as many days, across the two cities. The planning for the concerts was many months in the making, and the orchestra departed in the early morning of 5th March to perform that evening at the India Habitat Centre, New Delhi.

The music lovers in the capital turned up an hour early to grab the best seats, filling the Stein Auditorium to its capacity for the SOI’s maiden performance in New Delhi, which also saw senior government officials, foreign diplomats and top corporate leaders in attendance.

The programme for the tour was chosen to appeal to classical music connoisseurs and newcomers alike, and featured music by some of the greats of Western classical music – Vivaldi, Haydn, Beethoven and Mozart. Vivaldi’s Concerto for four violins in B minor provided a bright opening to the evening, with different soloists from within the orchestra performing each night. “I always encourage our orchestra players to participate in solo performances. For Vivaldi, I had chosen four different teams, so almost every violinist in both sections could showcase themselves in solo capacity,” says Bisengaliev, whose own beautiful violin solo in Beethoven’s Romance in F major charmed the audiences. It was followed by a special performance of ‘Air’ by Karl Jenkins featuring, along with Bisengaliev, flautist Aigerim Beisembekova on bansuri. Next on the programme was Haydn’s Cello Concerto in C major featuring SOI principal cellist Salauat Karibayev as the soloist, who stunned the crowd with his passionate performance and flying fingers. The programme concluded with a rousing, yet delicate, reading of Mozart’s Symphony No. 29.

Having travelled with the orchestra since it embarked on national and international tours, Bisengaliev speaks of its evolution.

“We have always wanted to expand our touring geography around India. Unfortunately, the orchestra was not big enough to offer a full symphony orchestra sound experience earlier. After expanding our team to a Mozart-size symphony orchestra, we can take interesting programmes to a very wide audience.”

The auditorium was teeming with people long after the concert was over and it was palpable that the audience couldn’t get enough of the music.

“It would not be an exaggeration to state that the concert by the Symphony Orchestra of India was a landmark event for all of us. Fourteen years after the Orchestra came into existence as the only ensemble of its kind in the country, it performed for a packed and discerning audience in the national capital for the first time, vindicating its name as an orchestra for India as much as it is an orchestra of India. We, at the India Habitat Centre, certainly hope that we can collaborate with the NCPA to ensure that this will be the first of many such tours to Delhi in the years to come.”

A need for the genre

The Delhi performance was followed by the SOI’s third outing to the Garden City of Bengaluru, with two concerts at a rather special venue. Ranga Shankara, the city’s beloved temple for theatre, made an exception to its programming on 6th and 7th March. Arundhati Nag, Managing Trustee and Artistic Advisor, Ranga Shankara, writes,

“We had the pleasure of witnessing and enjoying the superior music played by the SOI in the Ranga Shankara auditorium…The SOI is the first Western classical music programme to have been showcased in our auditorium and the shows were a treat for the audiences of Bengaluru…sold out three days before the performance and encores and standing ovations, the likes of which we have experienced very rarely in our theatre!”

The resounding response to the concerts connotes that Indians are hungry for Western classical music, an area where the SOI has had a key role to play. Bisengaliev points out,

“There is no doubt that the army of the Western music lovers is growing rapidly all over the country. The SOI somehow remains India’s only fully professional orchestra and we need to find all the possibilities to respond to this trend.”

The NCPA is grateful to its partners for this tour– the India Habitat Centre, Delhi Music Society, and Ranga Shankara – for presenting these performances and making the experience a wonderful one. We hope to increase the SOI and SOI Chamber Orchestra’s touring around India and take our music all around our country more frequently.

This piece was originally published by the National Centre for the Performing Arts, Mumbai, in the April 2020 issue of ON Stage – their monthly arts magazine.