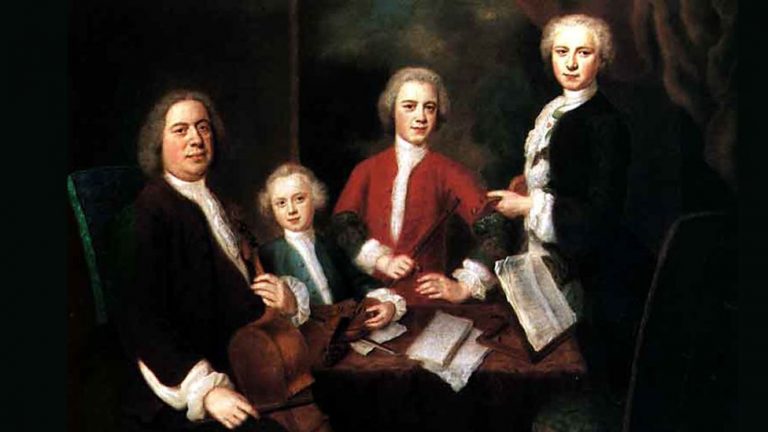 Johann Sebastian Bach was part of an extensive Saxon-Thuringian family that produced an unparalleled and almost incalculable number of musicians. From fiddlers and town musicians to organists, from Kantors, court musicians and Kapellmeisters, member of the Bach family extensively populated the musical landscape from the 16th to the 19th century. Without doubt, Johann Sebastian was the most important member of the family, and his genius combined outstanding performing musicianship with supreme creative powers. As a keyboard virtuoso, Bach acquired an almost legendary fame, and his accomplishments as a composer earned him a unique historical position. His musical language was distinctive and extraordinarily varied, drawing together and surmounting the techniques, the styles and the general achievements of his own and earlier generations. J. S. Bach’s forceful and original inventiveness combined with technical mastery and intellectual control to create numerous perfectly balanced masterworks.

Music for solo keyboard instrument remained central to C.P.E. Bach’s long career, and by age 11, he could play his father’s keyboard pieces at sight. Under his father’s supervision he also tried his hands at composition, and by 1738 he had a number of works to his name. In his autobiographical sketch, C.P.E. makes it clear that he never had any music teacher besides his father, and he simultaneously pursued extensive university training and a professional career in music. He became his father’s most important musical assistant, and would eventually enter into the services of Frederick the Great of Prussia.


In the immediate family of Johann Sebastian, we cannot forget his eldest son Wilhelm Friedemann. Widely acknowledged as a genius organist, improviser and composer, he was born in Weimar and his father carefully supervised his musical education and career. His musical education is documented in the Clavier-Büchlein für Wilhelm Friedemann Bach, containing entries by father and son. Friedemann took on a post as organist in Dresden in 1733, and among his numerous students was the famed harpsichordist Johann Gottlieb Goldberg! Various appointments in Halle, Darmstadt, Braunschweig and Berlin followed, but his supposed difficult personality made it challenging for him to hold employment. It has also been suggested “changing social conditions made it difficult for the self-possessed virtuoso to succeed in a church-or court-related position.” Almost certainly, W. F. was unwilling to compose in the fashionable, more readily accessible musical style. He wrote a number of church cantatas and instrumental works, and loved to incorporate elements of the contrapuntal style learned from his father.


Any mapping of the Bach musical genome would not be complete without Johann Christian Bach. The eleventh and youngest son of Johann Sebastian Bach and Anna Magdalena Bach spent much of his formative years in Italy, where he studied with Padre Martini in Bologna. In 1762, Bach traveled to London to perform three of his operas, and he eventually became music master to Queen Charlotte. As such, he had relatively free access to Queen’s House, better known today as Buckingham Palace. His primary duty was to compose music that could be performed by a member of the royal household. Working in a highly melodic style that favoured balanced phrases and held back on contrapuntal complexity, John Bach—as he was colloquially known—wrote a number of Keyboards Sonatas with Violin accompaniment and London subscription concerts invariably featured symphonies and concertos. Charles Burney praised John’s inventive and unpredictable use of the German idiom over the comfortable style of Italian music, and he clearly foresaw an important shift in instrumental conception and taste.