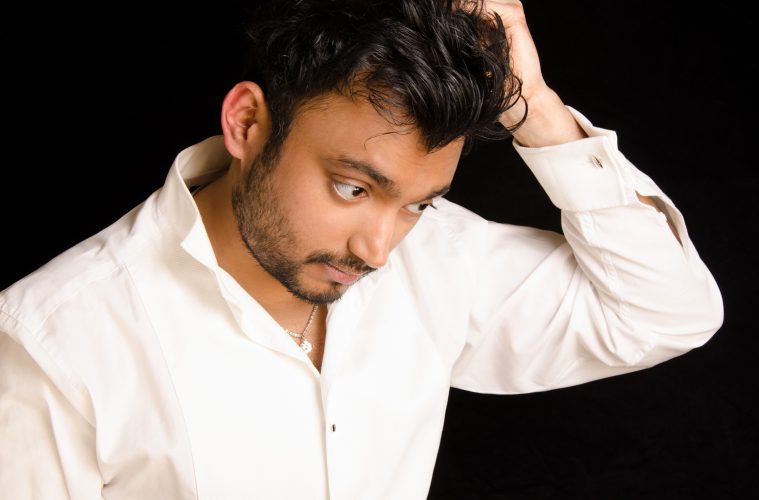 A Tenor From India

Indian tenor Amar Muchhala completed his studies in the opera course at Guildhall School of Music and Drama, and continues his vocal training with Janice Chapman. His training in Western classical music began at Franklin & Marshall College, USA, where he completed his degree in business management and French literature.He made his debut with the Kammeroper Schloss Rheinsberg in Germany, and has served as a cover for several roles at the Royal Opera House, Covent Garden. Future engagements include two productions with the Royal Opera House, Covent Garden, which are Glare, a new opera by Søren Nils Eichberg at the Linbury Studio Theatre, and a Michael Boyd production of Monteverdi’s Orfeo, where he will play Apollo and Shepherd. Muchhala will also perform at the NCPA with the SOI Chamber Orchestra led by resident conductor Evgeny Bushkov at the Experimental Theatre this month.

I didn’t even know what a tenor was until I joined a choir in my college – the choirmaster instantly identified me as a tenor and the next thing I know I was singing Bernstein’s Chichester Psalms.

On Stage: How does a Mumbai kid grow up wanting to be a tenor?

Amar Muchhala: Not many people know this, but I left for the US right after school to pursue undergraduate studies in business management and French literature. I didn’t even know what a tenor was until I joined a choir in my college – the choirmaster instantly identified me as a tenor and the next thing I know I was singing Bernstein’s Chichester Psalms as part of the tenor section. Opera happened to me by accident – serendipity as they call it.

OS: What were your earliest musical influences?

AM: In essence, I grew up with Hindustani classical music, winning accolades in school singing competitions. My school, Jamnabai Narsee School, had some wonderful music teachers who nurtured my creative talents. I used to sing and play the harmonium and was a regular performer during the annual school programmes, though I never took music seriously as it was simply a hobby.

OS: How were you initiated into the world of music?

AM: When I returned to Mumbai after my graduation to join the family business, I received a call from my voice teacher from NYC, Ms. Samuelson, enquiring about my pursuits in music – I had none. She insisted that I pursue professional studies in music to further develop my tenor voice. I casually applied to music colleges in UK, and, to my surprise, I was offered a place at the prestigious Guildhall School of Music & Drama in London, where it all began.

OS: What are your earliest memories of opera performances?

I had bought a £10 standing ticket at the Royal Opera House, Covent Garden, for a performance of Der Rosenkavalier by Strauss, with Dame Felicity Lott as the Marschallin. I remember being in awe of all that transpired onstage and the glorious voices that mesmerised me. Gosh! It went on for hours.

OS: Can you please talk a bit about the support you have received from your parents? Are they music lovers?

AM: As a child, I was always encouraged by my family in various extracurricular activities, including music, which I took up. They have always displayed unquestionable faith in my career choices even though we aren’t the most musically inclined family. I will always be extremely grateful towards them.

OS: Can you please talk about the music education you received in the US and UK? How did your institutions influence and shape you as an artiste?

AM: I worked with a wonderful voice teacher from NYC, who introduced me to the world of opera and the tenor repertoire. I was a naive 18-year-old boy with absolutely no knowledge of Western music. When I arrived in the UK, I was prepared for a rigorous schedule with language classes, piano lessons, aural training, singing lessons, lieder class, French song… the list is endless. There was so much so learn; effectively, I had to catch up on years of music learning to generally be on par with my colleagues. Three years later I was accepted onto the world-renowned opera Course at the Guildhall School of Music and Drama.

OS: Who are your mentors?

AM: Of course, it is a long list – from my voice teachers to all my vocal coaches who have contributed so much to developing my voice. However, I remain indebted to Patricia Rozario, who has been a constant in my life over the years, emotionally supporting me through several highs and lows of the profession. I draw tremendous inspiration and positivity from her experiences and mentorship.

OS: Can you describe your experience on the stage of the Royal Opera House?

AM: I feel privileged to have begun my professional journey as a singer at the Royal Opera House, Convent Garden, which is nothing short of a surreal experience. Honestly, I am anxious every time I walk through the stage door, but all anxieties melt away in that wonderful environment, working with the best in the business. As childish as it may sound, I have held on to all my ROH access/ID cards, bearing my name.

OS: What can you tell us about the programme you will be performing at the NCPA?

AM: It is an exciting yet challenging programme of some of the most beautiful operatic arias from the lyric tenor repertory, including rarely heard gems by Mascagni and Cilea.

OS: What does performing in India mean to you?

AM: I am a Gujarati, born and raised in Mumbai, studied and lived in the US and the UK, France, Germany and now working as a professional opera singer. Performing in India gives me the opportunity to amass all my experiences from around the world and contribute towards the vast Indian cultural heritage.

Amar Muchhala will take the stage on 8th July at the Experimental Theatre. This interview was originally published by the National Centre for the Performing Arts, Mumbai, in the July 2017 issue of ON Stage – their monthly arts magazine.