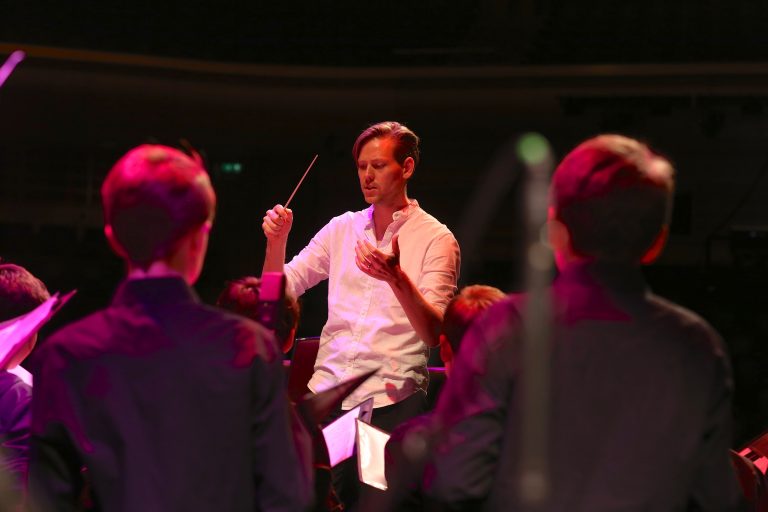 Trailblazing London-based conductor Robert Ames leads the Chamber Orchestra of the Symphony Orchestra of India in a special evening celebrating composer Vanraj Bhatia. Known for writing the scores for the films by Parallel Cinema director Shyam Benegal, Bhatia will be in attendance, witnessing a rendition of one of his orchestral works: Sinfonia Concertante. Also part of the event is a set by legendary Tabla Maestro and composer Zakir Hussain, performing with his group.

The evening marks the first ever occasion for Hussain and Ames to perform on the same stage. Despite belonging to different generations, the two artists share an interest in crossing boundaries between musical genres. The Tabla Maestro, the recipient of the first ever Grammy Award for Best World Music Album and a Guest Artist with SOI, has gained worldwide critical acclaim for merging Indian classical music with jazz, fusion and electronica. Ames, on the other hand, is a rising star on the UK classical music scene: the co- Artistic Director and co-Principal Conductor of the London Contemporary Orchestra, he has led the ensemble in performances of music by Radiohead, Beck, and Goldfrapp, as well as Terry Riley,  Steve Reich,  and Stockhausen.

The special evening at the National Centre for the Performing Arts is the culmination of Ames’ first ever tour of India. As part of it, he led Mumbai’s Symphony Orchestra of India (SOI) in three events taking place in Dehradun and Pune, as well as Mumbai, between the 24th and the 27th February. A closing concert will be held at Mumbai’s National Centre for the Performing Arts on Thursday 2 March.

The tour highlights the ever-increasing interest in Western classical music from audiences across India, where pieces that are already in the standard repertoire in Western concert halls are often performed with a fresh approach for the first time.

The tour follows Ames debut with SOI in March 2016,  when he led the ensemble and violinist Galya Bisengalieva in a programme of  music by Vivaldi, Piazzolla, Holst and Britten, presented alongside famous Hindi songs. For his return, the British conductor has chosen pieces by Handel, Vivaldi, and Mozart, performed with special arrangements focusing in particular on the strings. The conductor says: “The programme this year is all about finding the vocal qualities of string instruments and more specifically the violin. We will be performing a Vivaldi Concerto which I believe is one of the finest pieces he wrote and some arrangements of iconic opera arias for Violin and string orchestra. I think there is something for everybody.

Also part of the programme, and highlighting the continuity of performance traditions between Britain and India, is Vaughan Williams’ Lark Ascending – one of the most popular classical music pieces by a UK composer.

Programme (all performances except Wednesday 1 March):

Mozart – Divertimento in B flat major for String Orchestra