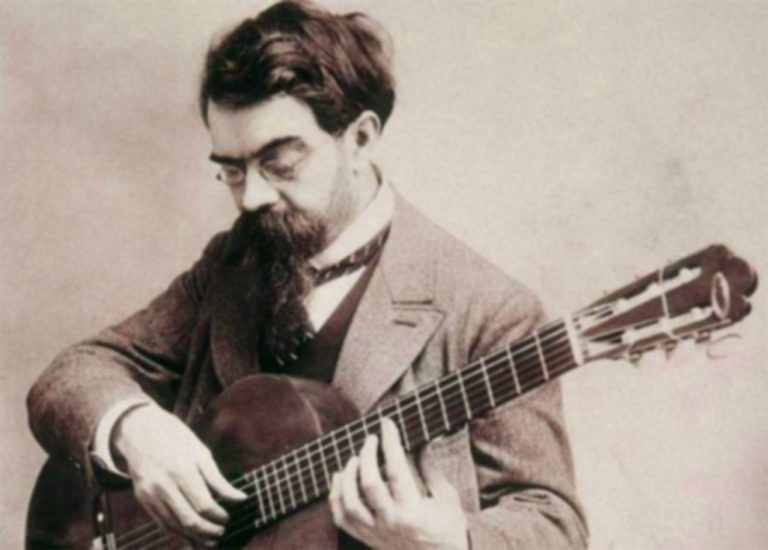 If the guitar had a patron saint or two, Francisco Tarrega would surely be one of them (Antonio Torres the other, perhaps?). More of us would remember him a lot better for a lot more than we do now, and that’s saying something, considering that a number of his compositions are widely posited in various classical guitar repertoire top 10 lists. But since it’s the great man’s 164th birth anniversary today, and I’m a little too far away from Barcelona to lay something nice on his grave, here’s writing a bit about him instead.

Francisco Tarrega was born this day in 1852 in Villarreal, Spain. His father played flamenco, and was supportive of Francisco’s early endeavors in music. A true prodigy by today’s standards, he was playing in coffee houses by the age of 10. Yet, in spite of reasonable support at home, he felt artistically stifled. He ran away from home three times before the age of 18, each time in search of greater engagement with the world through his music. One of those times the juvenile Tarrega joined a band of gypsies, with whom he played flamenco until he was discovered and taken home, presumably against his will. Another of those times he fell in to a ditch, as a consequence of which he lost his eyesight for a number of years thereafter. A bit of a wild child, perhaps? And talk about having an itch to perform!

By age 20, he was a conservatory wunderkind, a seasoned performer, and perhaps the best thing to happen to Antonio Torres’ career in lutherie. Having been an astute student of both the guitar and ‘formal music’ (read: the piano) for much of his life, our hero now fed his burgeoning skills and unprecedentedly capable instrument (the newly evolved classical guitar, broadly as we know it today) on a steady diet of his own adaptations of major composers’ works, including some of the better-known compositions by Bach, Beethoven, Chopin, Vivaldi, and more. Many of his arrangements of these romantic era and even earlier works remain a guitarist’s first choice for musicality, when looking for arrangements of pieces by the afore-mentioned great composers.

By age 30, Tarrega had seen enough of life to start penning some great music of his own. He had also grown into the prodigious whiskers and mop (and baggy suit) you can see in a few sepia photographs on Google Images. Though he would doubtless have had a stellar career on his merits alone, we must be grateful for the fact that he knew the value of networking and seeking out patronage, because he wrote a lot of his most famous works with the support and patronage of Conxa Martinez, a wealthy widow who appreciated his compositions and his playing. It was her support that gave him a retreat where he could sit and write in Barcelona, and her support once again that took him to Granada – for a retreat that is now fateful for his having written Recuerdos de la Alhambra, perhaps his most famous and celebrated work.

Throughout adulthood, he performed widely, preferring smaller, intimate settings to traditional concert halls. Many have wondered about this, and speculated that his preference for small venues and audiences was a consequence of childhood traumas, or a preoccupation with his instrument’s volume…personally, I think it’s because he understood that the magic of the guitar requires an intimate setting to really work.

When middle age came on, the consummate performer and profound composer – and by this time, the undisputed grandfather of the classical guitar – mellowed gracefully. Beyond giving back through performance and composition, he also paid it forward by teaching many of the next generation of maestros.

Well, that’s his story, albeit very briefly. For sharing’s sake, and because the people-emotions-compositions-music-emotions-people chain, that links us who play today to the likes of him, is both impossibly impersonalized by intervening time and space on the one hand, and extremely personal on the other, I’ll tell you about the time his story first crossed mine: he came into my life, sans preamble, with Recuerdos de la Alhambra. I was 14 at the time, and had been playing for about 6 years. I had never heard tremolo on the guitar before, but followed the score my teacher gave me. Paradise is most truly appreciated by a child let loose within it, without being told where he is – and so it was for me with Recuerdos. I don’t suppose I’m anywhere near being alone in counting Francisco Tarrega amongst my greatest inspirations in music, and when I did first hear a recording of the piece some years later (John Williams’ masterful rendition), it was like discovering it for the first time all over again. It’s still one of my favourites.

Mil gracias, Mr Tarrega – and here’s to you on your birthday. The world continues to be blessed for your having passed through it.

This article first appeared on The Well Tempered Guitar