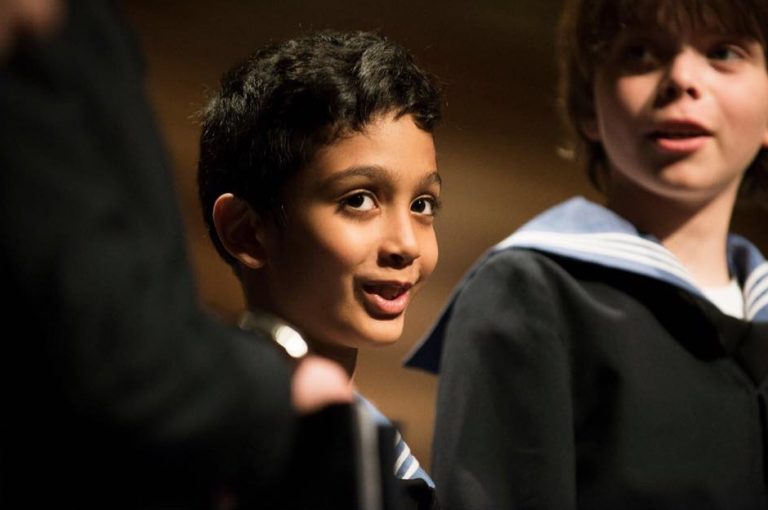 It’s a sunny afternoon in Delhi and I am wandering around the Qutub Minar with my cousin sister, who asks me about the origins of the minaret. Before I can answer, a confident voice pipes in and prattles off the relevant facts and figures. The origin of said voice is my at shoulder-height 11 year old nephew, confidently striding towards the Iron Pillar to show us the way to one of his favourite parts of the complex. Rishan has a keen interest in historical monuments, airplanes, football, nose-stuck-to-his-iPad-games and music. He is home on holiday for a few weeks in Delhi. As he chatters on and drags us around the complex, it is almost hard to believe that he has achieved so much in such a short time. He studies and lives in Austria as a part of the renowned Vienna Boys Choir – the first boy from India to be a part of the 500 year old choral group. He has been there for a year and a half now, thoroughly immersed in a hectic rehearsal and concert schedule, touring the world with the choir, and living and studying within the Augarten Palais in Vienna. Rishan was the cutest little toddler – precocious, chatty and curious. He is now a slightly more serious version of his infant self, but still the goofy affectionate chap he always was. What was striking to everyone who knows him is the clarity he has, even from a young age, about wanting to perform and be in the spotlight. At age 6, when she tried to explain to him what modesty meant, he told his mother,

“I want to be famous! Well I don’t mean that I will be the best, because you know that place is for Michael Jackson!”

And boy was he enthusiastic and hardworking about his many passions. Whether it was lapping up and then rattling off every bit of information he heard about aircrafts, learning to horse ride, or busting out some entertaining moves! But it was singing where he was noticeably focused. After going up to the band in a hotel restaurant to sing “You Are My Sunshine” when he was 3; performing endlessly for neighbours, friends and family; and putting on “rock shows” with his little sister; he began more formal training when he was six. My sister and brother-in-law encouraged his interest, enrolling him in voice lessons, exposing him to all kinds of music including musicals, choirs, acapella groups, orchestras, jazz festivals and more. He had remarkable concentration for a kid, never asking to leave early or getting bored with the different genres of music. Performing was his first love and he sang solos in numerous concerts that were organized by his music academy. An audition for the Mozart Children’s Choir brought a different dimension to his vocal training and he learned to sing in harmony with other voice parts. Regardless of the day of the week, he wanted to be a part of every concert and his mom drove him all over the city after school if he had a show, her initial refusal to let him perform on school nights eliciting much pleading from him that he didn’t want to miss a performance. Many a night he would go straight from school to a concert, eating in the car on the way to his show, and changing into his PJs to sleep on the ride home. His hard work and talent was noticed by the Director of the Vienna Boys Choir, Gerald Wirth. The Mozart Choir had a workshop with Mr. Wirth and after interacting with Rishan, he had a chat with Rishan’s mother about bringing him to Vienna to do a test run with the Vienna Boys Choir. His parents were quite startled initially; he was 8 years old and would only come home twice a year. But it was Rishan who begged them to let him try it out. Though reluctant at first, the thought of denying him such a huge opportunity and regretting it later was not an option they wanted to take. So in April 2015, his parents and sister went over to Vienna with him for his trial period. He enjoyed it, stuck on and there has been no looking back since. Now almost two years later, there is the innate goofiness and some of the childlike innocence, but a confidence and maturity that has come from living away from his family, experiencing something that most would only be a part of as adults, and travelling the world. He chats excitedly about the Dreamliner he flew back home on from Vienna (current favourite aircraft), how he prefers America to Europe and how they’re “forced” to take some time to rest everyday while on tour – which for fidgety and hyper 11 year old seems like a sheer waste of time! The choir, between the 4 groups of Haydn, Mozart, Schubert and Bruckner, performs around 300 concerts a year in Austria and around the world. Their year is broken up into an academic semester and a touring semester. Some of the destinations are short-haul destinations within Europe, but about two months of this semester are spent in a fast paced tour of a region or country, performing almost every night in a new place. Rishan is part of the Haydn Choir and went on his first tour in 2015 to China, Hong Kong, Singapore and Taiwan. He spent November and December of 2016 in the U.S. touring the West and East coasts. He chats about the tours being fun, but tiring, having to spend a lot of time travelling. In the U.S. they travelled around mostly by coach, but on their Asia tour they took a lot of flights. Losing track of where you are, where you are staying and what day it was seemed common as each night was a different place, a different audience. But what remains constant is the adulation and excitement that surrounds their concerts and all the boys are pros at handling the attention, sportingly smiling and waving at airports, posing after concerts, and signing autographs now and then. Some family and friends managed to catch his concerts at the U.S. this time, which he loved, since it also involved getting presents and being spoilt a bit! And which place did he like best? The bright lights and buzz of New York City were a huge draw and he loved Times Square and the NYC skyline (a visit to Universal Studios in LA was a close second). On their tour, the boys performed a tight repertoire of classical, Christmas and Austrian folk songs. A favourite with most of the audience was “So Long, Farewell” from the Sound of Music soundtrack, inextricably linked with almost everyone’s image of Austria, and “Feliz Navidad”. What was his favourite performance on the U.S. tour? He replies immediately,

“Carnegie Hall in New York! I was terrified and so excited all at the same time!”

For kids who perform almost every day for different audiences, some of them Heads of State and VIPs, it’s amazing that they still get nervous.

“Well it’s just so big, the biggest hall I had ever sung. And it was absolutely full. The biggest audience I had ever performed for”.

With everyone from the Beatles to Sinatra having performed at Carnegie Hall, it is understandable that its hallowed stage would make one quake in their boots!

But it is hard work and there are many times when long hours or getting sick makes him miss home. He spoke about a coach journey that was unexpectedly long when they were on one of their international trips, their bus breaking down and all of them so tired and just wanting to get to their destination. He got quite ill on one of these trips and had to be hospitalized for a few days, which was hard on him as he had to miss part of the tour. His grandmother, who is recovering from a long bout of being ill, was quite surprised when she got a call from him to say,

“I now know how you feel Mumsie, it’s really horrible being in hospital!”

It’s these sudden moments of affection and maturity, interspersed with being just a child, which strike one the most.

The normalcy at home helps keep him grounded, his family and friends ensuring he does not take himself too seriously. Here he is squabbling with his mom for bossing him around and making him wear too many warm layers, hugging his little sister one minute and then proclaiming that she is the most annoying creature on earth, refusing to sing anything but highbrow classical music when I kid around with him to belt out some Bieber, bullying his dad into letting him play more on the iPad, or delighting in the heap of Christmas gifts that comes his way. One minute he is receiving the National Child Award for Exceptional Achievement and later building a Lego set and enacting an elaborate make-belief scenario around where planes are missed, captains make miraculous landings and the Dreamliner features prominently! He returned to Vienna after his Christmas break, escorted by his parents and sister. There is a hint of him not wanting them to go, but he doesn’t want to show it too much. However, as soon as his mom makes him pile on some more warm clothes he has decided it’s time for them to leave. The last-minute arguing a clever tactic to save them from any parting tears. He’s off to St. Petersberg and Moscow next and the Haydn Choir is preparing an opera this semester about the life of Joseph Haydn. He is playing the composer’s younger brother, Michael Haydn – who was also a part of the Vienna Boys Choir – over 300 years before Rishan! Bouts of being homesick will have to take a backseat to being back with his friends and getting caught up in a whirlwind schedule. Vienna is now as much home to him as Gurgaon. Whether music will be a permanent path for him is still to be seen, but for now, his choices veer between a music director to a pilot and everything in between. And that’s what it should all boil down to for an 11 year old – a life ahead full of possibilities!