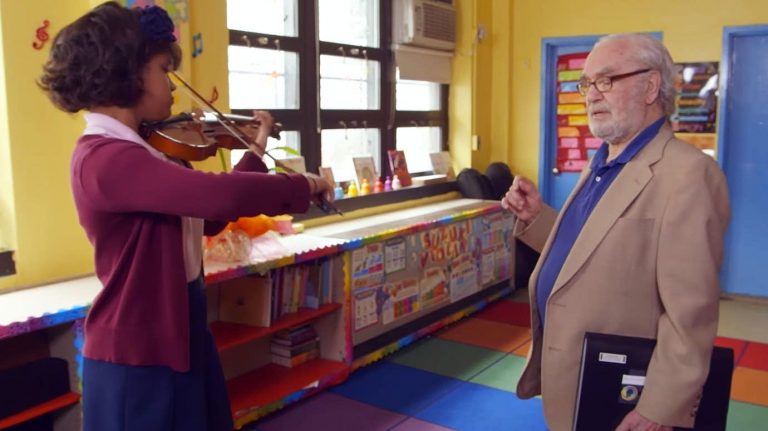 When we began our music charity for disadvantaged children Child’s Play India Foundation (www.childsplayindia.org), we made an appeal to the community to donate unused musical instruments to us. Seven years on, this is not as big a crunch as the need for more teachers to allow us to widen our reach. But even so, we occasionally get instruments that have travelled long distances, and from very different backgrounds. One cannot help speculate who their owners were, what they were like, what melodies they played on them, and (if student instruments) whether the former owners have continued playing, and to what level.

It was with great interest therefore, that I heard about the Oscar 2017 nomination of ‘Joe’s Violin’ under the Documentary Short Subject category. The short (24-minute) documentary film narrates how an instrument collection drive for disadvantaged schoolchildren in New York City brought a 91-year old Holocaust survivor Joseph ‘Joe’ Feingold and the recipient of the violin he donated, 12-year old Latino seventh-grader schoolgirl Brianna Perez in the Bronx (“the nation’s poorest congressional district”), together.

In the documentary, we learn that Feingold had stopped playing his violin about eight to ten years ago as his age advanced. “How long can you live with memories?” he asked himself when he heard of the instrument collection drive, run by popular radio station WQXR serving the New York City metropolitan area.

“It’s very simple!” we hear the RJ say in a cheery voice “You have an old instrument sitting around? Drop it off! The instruments will be distributed to schools in New York City and it seems like every instrument has a story behind it.”  The collection exceeded WQXR’s expectations; they estimated they’d receive a thousand donations, but they got thrice as many, five hundred on the first day alone.

We hear an overlap of donors’ voices mentioning their name, instrument, and a little about its history. Then we hear Feingold’s voice over a picture of the WQXR Instrument Drive form he filled out. He reveals that he bought the violin while in a Displaced Persons (DP) camp in Germany in 1947, after the horrors of WWII and the Holocaust had ended. He explains in the form that it was a camp for Holocaust survivors. He bought in a flea market there in exchange for just a carton of cigarettes!

Why buy a violin when he probably had much more mundane necessities at that time in his life, his daughter wonders. And then Feingold’s life unfolds. Born in Warsaw in 1923, he grew up playing the violin. “I delighted learning about the strings, the tonality.” His mother loved music, and it meant a lot to all the family. He would play as she sang.

The war in 1939 shattered their idyll. The family separated, with his father and he escaping to the Russian-occupied part of Poland, only to end up in a Siberian labour camp. His mother, brothers (and his violin) stayed on in their home. Despite hard labour, he wrote his mother every month. In one letter, she replied in the words on Solveig’s Song from Edvard Grieg’s Peer Gynt: “The winter may pass and the spring disappear; but I know for certain you will come back again and even as I promised, you will find me waiting then.” Appropriate words for a mother missing her son. Its poignant melody obviously holds a special place in Feingold’s heart. But they never met again; his mother and one brother perished in Treblinka.

WQXR partnered with the Mr Holland’s Opus foundation (MHOF). Many of you will recall the 1995 film Mr. Holland’s Opus, with the title role beautifully played by Richard Dreyfuss; it is a heart-warming story of a brilliant musician who takes on a teaching position in a school system that doesn’t value music education very highly, and how he wins colleagues over while touching the lives and hearts of a whole generation of students that pass through him. MHOF was created a year later by Michael Kamen, the composer of the soundtrack for the film. Its catchphrase is “Keeping Music Alive in our schools”, which it does by “donating musical instruments to under-funded music programs nationwide, giving economically-disadvantaged youth access to the many benefits of music education, helping them to be successful students, and inspiring creativity and expression through playing music.”

When MHOF heard of Feingold’s violin donation, they felt a sense of responsibility for this instrument in particular, “to find a home for it, where it can continue having its voice.” And that home was found in the Bronx Global Learning Institute for Girls (BGLIG). Students are accepted on a lottery basis, largely from new immigrant families. Every child from kindergarten upward learns violin; “the violin project is treated like any other subject area”. We’d so love to do this at Child’s Play, if only we could get more teachers to join us.

What struck a chord in MHOF when zeroing in on BGLIG was the fact that its principal called her girls “survivors”, the same word Feingold had used to describe himself.

Raised by a single mother, Brianna Perez identifies with her childhood obsession, Tinkerbell, “independent, hardworking fairy”, and believes that like her, she too “was chosen for something special.” Her mother attests to how she gets transformed when she plays, going “inside the music.” She calls it her “light”. The melody she plays in the film is Bach’s Minuet 1 from Suzuki Violin Book 1, so it resonates a lot with me as our kids have played it and many have gone way past it. And many of our children’s stories mirror Brianna’s as well.

Joe’s violin is handed to Brianna by her violin teacher in a very emotional ceremony, watched by her schoolmates. She calls it “history in my hands”, “more than just a violin”, “an adventure” and marvels at all its secrets.

Why did Joe buy the violin in 1947? Because it transported him back to a happy place and happier times, before the war. That’s the healing power of music. His wife knew this, and her first gift to him was a music-stand.

The climax of the film is the even more emotion-charged meeting between Feingold and Perez, after she wrote him a letter to invite him. She plays for him –you guessed it – Solveig’s Song.

Feingold seems perplexed by the fuss surrounding his donation: “To me it’s a very simple thing; I don’t use [the violin], let someone else enjoy it. Did I really deserve [the fuss]? What did I do?”

“You never gave up”, answers Perez. “That’s what you did. You had hope.” And Perez has hope too: to be a music teacher someday.