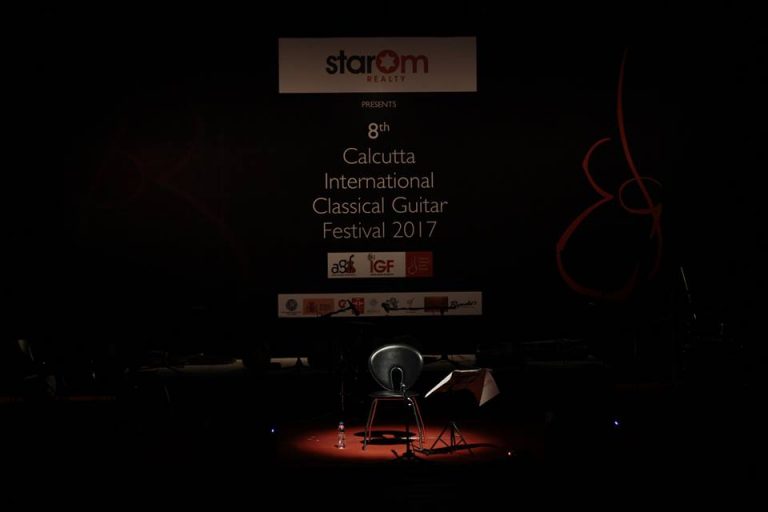 Annual visit to Kolkata has become a pilgrimage to many who are passionate about Classical Guitar. The participants come from all corners of India, as far as Nagaland and Kerala. Since 2010, each winter, the Indian Guitar Federation and the Calcutta Guitar Society have been organising the Calcutta International Classical Guitar Festival 2017. Organised by a dedicated team of members, the festival has been attracting internationally acclaimed Classical Guitarists all these years.

The high-point of Festival-2017 was the presence of Pavel Steidl, Marcin Dylla, Miguel Trapaga, Johannes Moller and Le Maestrio, and participation of a large team from Nagaland. There were Master classes each day in the morning and post-lunch. Evenings were filled with sold-out concerts, well attended by the very interested audiences of Kolkata.

Members of Pune Guitar Society attended the Calcutta International Classical Guitar Festival 2017 in Kolkata. We took notes during various Master classes of the discussions. These notes, taken in a hurry, have been edited and enhanced to presented here. Some of the points may sound repeated, however they convey the nuances, hence we have presented them as we heard them. We do understand that the notes alone don’t covey the full context. We hope that the readers will nevertheless find these reflections useful while studying. In the least, it gives us a look into how great guitarists think. “To make the best sound, one has to be that sound”

Pavel Steidl (born June 24, 1961) is a classical guitarist who was born in Rakovnik, Czechoslovakia (now in the Czech Republic), but has lived in the Netherlands for many years. After winning first prize at the 1982 International Guitar Competition of Radio France in Paris, Steidl began his career as a professional musician. Since he won first prize at the Radio France International Competition in Paris in 1982, he has become one of the most widely celebrated soloists of his generation. In his teaching, Pavel’s approach is encouraging but subtle. For, as he says, “the teacher is not allowed to say everything. I let them play one piece. Each note twice, one staccato, one tenuto, to show what you can do. The possibilities: that’s what I like very much….”

Notes from the Pavel Steidl’s Masterclasses

Note – Having said this, Pavel did mention that there are players with long nails, who do get a very good tone. But he does not suggest keeping nails very long

Note – Pavel stressed on the importance of thinking ‘movement’ in music. The movement of the body while playing is of utmost importance.

Note – Learn to damp/stop the sound of a note with the left and the right hand. While practicing this, use long sounds and short sounds in succession as mentioned above.

Note – The larger point Pavel was trying to make was – One should relate the ‘tempo’ of a piece to its overall mood/emotion/sentiment/sensibility.

Note – Pavel mentioned that the first time you hit a high note, one has to show this in the articulation.

Note – Many a times, the overall slow tempo at which one is practicing might slow down the movements of the finger in between the notes at the risk of making some notes longer than how they are written. Avoid this.

Note – This is a point made in context of how perceptions and notions about musical compositions has changed over the centuries.

Note – Pavel explained the importance of ‘shaping’ the sound often with body actions choreographed to the music with some live movements. The sound indeed appears to be enhances. However, it is not clear this really changes the overtones and modulations or it merely creates audio-illusion of modulations because our brain mixes what we see with what we hear.

Note – Pavel was referring to the three types of accents – dynamic, agogic and tonic.

Note – Pavel mentioned the importance of the Bel Canto and understanding how singers sing, especially in Italian music. From Wikipedia – Chiaroscuro (music) Chiaroscuro (Italian for “light-dark”) is part of bel canto, an originally Italian classical singing technique in which a brilliant sound referred to as squillo is coupled with a dark timbre called scuro. The overall sound is often perceived as having great depth or warmth.

Note – Our fingers have three joints. While the 2nd and the 3rd joint are used, we often do not employ the first joint. The first joint is the one where the finger is joined to the palm.

Note – Here, Pavel is referring to this notion of ‘upward’ movement of the sound. By ‘upward’ he hinted at a psycho/acoustical phenomenon of an ‘uplifting’/’ascending’ sound. The converse being true for the ‘downward’ sound.

Note – Here, a reference was made to the highly developed and sophisticated system of ‘bols’ which are used to convey a ‘bandish’(composition) in a ‘taal’.

Note – Say, you are playing D and a D# together. Play them in a staggered fashion (quickly one after the other) to bring out the dissonant interval fully.

Note – Here, Pavel was referring to the different types of upstrokes and downstrokes as well as the hand/wrist position dynamics.

Note – Pavel was referring to the amount of attention which is required for both right and left hand to be able to create a particular sound.

Note – This is a highly involved point, but nevertheless one needs to understand the difference between these two words very clearly.

Note – This has to be understood in the context of right hand fatigue and right hand note articulation.

Note – Pavel was indicating that one should take up music that one can handle in terms of comprehension, execution and communication. It is much better to play an easier piece with great finesse rather than playing impressive score unimpressively. “Often a small thing is blocking a larger piece. Locate it” – MARCIN DYLLA

Marcin Dylla was born in Chorzow, Poland, and took lessons at the Ruda Slaska Music Conservatory. He attended the Music Academy of Katowice, and academies in Basel, Freiburg and Maastricht. Marcin Dylla is a rare phenomenon in recent history of Classical Guitar. Many music critics, connoisseurs and music lovers certify that Marcin Dylla is among the world’s elite of classical guitar players. He has earned this position, among others, to unparalleled number of awards including 19 First Prizes from 1996-2007 at the most prestigious international music competitions around the world. His last triumph was the Gold Medal of the ‘2007 Guitar Foundation of America International Competition’ in Los Angeles known as the most prestigious guitar contest in the world followed by tour of over 50 cities in North America, Mexico and Canada during 2008-09 season, live recital video recording for Mel Bay Publications and CD recording for Naxos that reached the Naxos ‘Top 10 Best Selling Albums’ in September 2008. His live recital DVD “Wawel Royal Castle at Dusk” was nominated for 2010 Fryderyk Award (equal to American Grammy) in the category of Solo Classical Music Album of the Year.

Note – This was very evident in Marcin’s master classes. Marcel would immediately try out a phrase 5 – 6 times, each time getting better, till he got the phrase to convey what he wanted it to.

Note – We think what Marcin was trying to say was that long phrases need to be played like one ‘idea’ or one ‘entity’ in a way that singers play a string of notes in a one breath.

Note – Marcin was talking of thinking of phrases which occur one after the other as a conversation between different voices. Thinking orchestrally helps in articulating different ‘conversations’ between instruments/voices.

Note – For example, in a 4/4, we know that the downbeat is the first beat and it is supposed to be accented/stressed. This is true as a rule but there are many exceptions to this, so do not do this every time.

Note – Here, Marcin was referring to building a narrative or storytelling skills. Born in Cantabria in 1967, Miguel Trápaga has won top prizes in several guitar competitions, including the XVIth Andrés Segovia International Guitar Competition, Palma de Mallorca, the IIIrd Great Lakes Competition, Oberlin, Ohio, and the XIIth International Solo Guitar Competition, Guitar Foundation of America. He has performed in broadcasts for Spanish National Radio, Antena 2 of Portugal, the BBC and elsewhere and has recorded six compact discs. Currently a teacher at the Royal Conservatory of Music in Madrid, he has given masterclasses in Spain and abroad (Sibelius Academy, Frederic Chopin Academy in Warsaw, Melbourne University), and has performed in the main concert halls and theatres in Spain, with concert tours of Europe, Australia, Africa, Latin America, Asia, Canada and he United States. He has performed with numerous orchestras, including the National Philharmonic of Ukraine, the Seville and Madrid Symphony Orchestras, and the Canberra Symphony Orchestra. With the Simon Bolívar Symphony Orchestra of Venezuela, he performed Leo Brouwer’s Concierto de Benicàssim conducted by the composer.

Note – Miguel was referring to the clarity which one should have about what is going to happen next in the piece.

Note – though Miguel demonstrated this, you need to try this out to see how it works.

Note – The string can be plucked up, down or sideways – try and see how they create different sounds.

Note – The fluidity in playing phrases across strings can be achieved by practicing arpeggios.

The Pune Guitar Society thanks Pavel Steidl, Marcin Dylla and Miguel Trapaga for this invaluable guidance and insight. Thanks to the Indian Guitar Federation for the organization and creating this wonderful opportunity to interact with these masters.

The article was edited and compiled with Pradeep Gothoskar of the Pune Guitar Society.