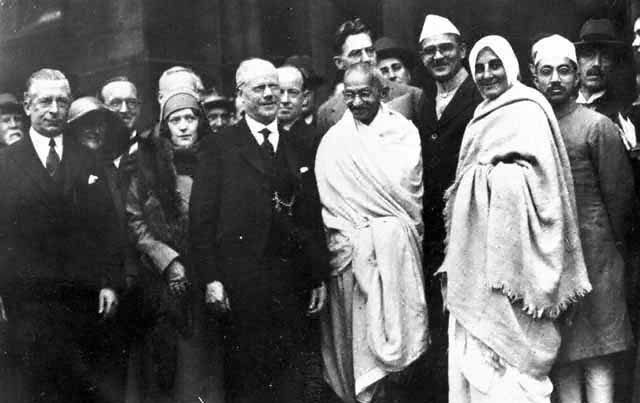 Beethoven and Gandhi: Two of Their Admirers

Two of Mahatma Gandhi’s most effective foreign disciples during his lifetime were great admirers of Beet­hoven. One of them was a Nobel laure­ate and a former university professor (at the Sorbonne) of music history, Romain Rol­land (1866-1944). He told Gandhi, in 1931, “You are the greatest soul of the 20th cen­tury, as Beethoven was of the 19th.” The other one was Madeleine Slade (1892-1982), the daughter of the admiral of British fleet in the Indian Ocean, Sir Edmond Slade. Gandhi gave her in 1925 an Indian name, Mirabehn, and then her home at Sabarmati Ashram until the British closed it down in 1933 was a tiny hut (formerly the home of Vinoba Bhave) near his own lodging.

Mirabehn had become devoted to Beethoven’s music long before she ever heard of Gandhi. During her teens in England, her father had bought a player-piano – a kind of piano with a mech­anism (invented in 1897) that could play music on it automatically via pneumatic power (you would pump with your feet) and holes in a gradually unwinding roll of stiff paper; it became quite popular until the phono­­graph super­seded it in the late 1920s. Included with the player-piano delivered to Mirabehn was, according to her auto­­bio­graphy, a “varied selection” of piano-rolls:

“I played and listened, but nothing interested me particularly except one piece which held me from the moment it began. It was Beethoven’s Sonata Opus 31, No.2. I played it over and over…. I … procured one Beet­hoven sonata after another…. I was finding some­thing far be­yond the music…. I threw myself down on my knees in the seclusion of my room and prayed….“

“Then… Father, who had become an admiral, was appointed Com­mander in Chief of the East Indies Station…. [During that sojourn,] India… meant nothing to me but a life of social func­tions and formali­ties in a very restricted society which did not appeal to me…. [So when] the others left [again] for India in the autumn, …I remained [at home in Eng­land]. …I played and listened to Beethoven day after day…. I im­bibed, more surely than if there had been words, a sense of fearless­ness, strength and purity passing, especially in the slow movements, to those regions of the spirit which lift one into that which can only be felt but never spoken.”

She took piano lessons (but her own playing was hopeless), attended concerts, and became herself a con­cert manager. In 1921 she arranged for a famous German con­ductor to visit England and lead the London Symphony Orchestra in some con­certs, mainly of works by Beethoven, which brought an end to a Brit­ish boy­cott (occasioned by the First World War) of German musicians. She made pilgrimages to the house where Beet­hoven was born in Germany and to Vienna where he had made his career.

Soon after returning to London from Vienna, she “heard of an epic novel in several volumes by a French writer, which, people said, was a great work and was partly based on Beethoven’s life”. It was Jean Christophe, for which Rolland had been awarded in 1916 the Nobel Prize in Literature. She began to read it, but her school French was inadequate. Then she saw in a news­paper that Rolland was visiting London at the in­vitation of the Pen Club (the original pen friends’ club). She con­tacted him; she spent a year in France studying the language so that she could converse properly with him; and then, the second time they met (at his home, in Switzerland):

He mentioned… a small book he said he had just written… called “Mahatma Gandhi”.

‘You have not heard about him?’, he asked.

So he told me, and added: ‘He is another Christ.’

This led to her finding her way to India, and within ten years Rolland was calling her Gandhi’s “principal disciple” (meaning among Western­ers).

She and Gandhi visited him for a week in 1931, and it was then that he said that just as Gandhi was the greatest soul of the 20th century, so Beethoven had been of the 19th. On the last evening, Gan­dhi asked to hear some music by Beethoven, so Rolland, who was a very adept ama­teur pianist, played on the piano a version – he didn’t need a written-out transcription – of the slow movement from Beet­hoven’s 5th Sym­phony. (He asked Gandhi how it had impressed him, and Gandhi replied, with a little laugh which Rolland described in his diary as having been at once mischievous and candid: “It must be beau­tiful, since you tell me it is.”)

As the guests were leaving, Rolland gave to Mirabehn a musico­logical book about Beet­hoven which he had written while she was in India. Years later, in 1960, she began to read it, and it touched her so much (“Some­thing began to stir…. It was the spirit of him from whose music I had been separated”) that she moved from India to a village near Vienna and devoted the rest of her life to the study of Beet­hoven’s life and music. According her best friend in Vienna, Rosetta Spalt:

“Mira worked every day at the task she had set herself, the study of Beethoven. She lived in Gandhian simplicity, in a small cottage heated by a wooden stove, and was attended by a shy and gentle man who had come from India to take care of her and her housekeeping and personal needs. She consulted the literature written about the com­poser [and] listened every evening to recordings of his music…. Spiritual search, love for the creation, inspiration coming from the Creator, and need for harmony between man­kind and the cosmic laws and with nature – the respect for which is fundamental to the salvation of human­ity and the earth – were in Mira’s mind the basic truths inspiring both Gandhi, the religious politician, and Beethoven, the composer.”

When Richard Attenborough was getting ready to make his great film about Gandhi, he visited Mirabehn (so he could know how to cast a suitable actress to represent her). This inspired her to write a screen­play from which she hoped he would make a film about Beet­hoven. When that didn’t happen, she wrote a little book, Beethoven’s Mys­tical Vision, re­count­ing the composer’s life with special attention to his per­sonal and spiritual devel­op­ment, and dis­cussing how he had written out in his note­books some “passages drawn from … ancient San­skrit litera­ture”. Mrs. Spalt gave to me (during a visit of mine in 1996 to Vienna for some lec­tures and research) the as-yet-unpublished material so that I might arrange for it to be published in India. The first edition was pub­lished, in Madurai, in 1999. A second, digital edition, issued this year on Mirabehn’s birthday by Mahatma Gandhi Mission University, will be pub­lished soon.