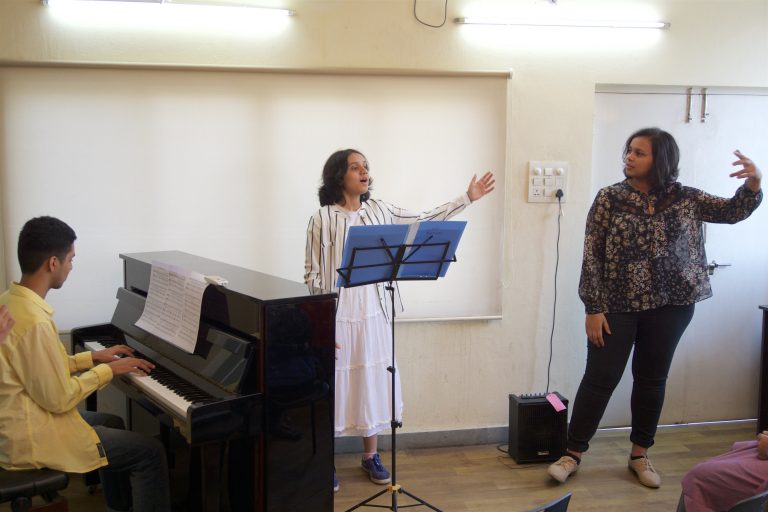 Classical Music, Singing and the Bigger Aspects of it – Conversations with Ankna Arockiam

Western classical music is incredible in one sense because it gets to survive despite influences of newer genres of music as years pass by. However, it doesn’t mean that it is not met with challenges in the field of teaching, performing and also how to perceive it as an art. Ankna Arockiam – a student of Royal Conservatoire of Scotland (who is also researching identities of young Western classical musicians in India) and a Hyderabadi at heart came to the City of Pearls for a unique collaboration with her friend and pianist Shantanu Patel for a voice and piano workshop on 3rd December at Musée Musical. They also performed the day before in the midst of select audience. On this eve, here is an exclusive chitchat with the effervescent Ankna and about her views on bigger aspects of Music.

Navya Chittarvu: How was it performing in Hyderabad after such a long time?

Ankna Arockiam: It was incredible to perform in Hyderabad with Shantanu. I must appreciate the audience for being so delighted and open to hear rare compositions which are not usually performed by artists in India. I have got more zeal to do more such concerts which not only focuses on the individual’s talent but also on rare composers and their perception of Music – in short, an instructive style of a concert! (I am very interested in the concept of educative concerts in India)

NC: You did a workshop named SING earlier in April this year. How different is this workshop in comparison?

AA: SING was a workshop which had comparatively more students and we focused on generic aspects of singing and vocal techniques. The response for that workshop was highly positive and I realised that another workshop which gives more individual attention is required. I designed this workshop in such a way that it identifies the individual issues of a participant and makes them correct it right at the moment – which is highly beneficial compared to a generic lecture or a talk. This was the reason we took only select number of students for both vocal and piano workshop conducted by Shantanu.

NC: What are some of the crucial aspects that you have learnt during your time in Scotland?

AA: Apart from associating with amazing musicians across the globe, my confidence as a performing artist has improved tremendously after going to Scotland. I improved as a musician and also as a person with grown confidence and increased zeal in believing that there is always something to be learnt in Music – that is quite an optimistic and hopeful thought!

NC: What are the most important aspects of singing which have to be inculcated to the student?

AA: A singer must first understand their (own unique voice) and vocal range that they are most comfortable with. Next, as voice is a lively instrument – the singer must understand its individual makings and focus on how to budget breathing while singing. Breathing is like a lifeline for a performer. Last but not the least, a singer must have confidence in his/her abilities and spend significant time in understanding the motive behind a composition and implement the same in the performance.

NC: How do you approach a composition before performing it usually?

AA: Well, it depends on the composition. I begin with understanding the background of the composition, its characters and the scenario in which it was written. The exact expressions intended by the composer should reflect in the performance. I also try to add my own interpretation into the composition – without tampering with the original value. As a singer your main role is to tell a story.

AA: Definitely not. There is no written rule that a major scale song would always be happy. We have seen ample examples where a minor scale composition is used for a peaceful scenario like a lullaby. It is important to see a composition as itself and an individual entity before succumbing to such preconceived notions.

NC: What are the biggest challenges in India for Western classical music?

AA: The biggest challenge in promoting Western classical music is lack of competent teachers. There is a huge gap between the teacher’s knowledge and how far it is reaching the student. The attitude of the students must change as well. One cannot become a performing artist overnight – it needs lot of dedication, practice and discipline to become an artist. Moreover, in India, this needs to be considered as a full time profession which is well respected like any other degree such as Engineering or Medicine. Unfortunately, we still consider the performing arts to be more of a hobby and that there is not much of a career in this.

NC: How do you think such a notion can be alleviated?

AA: With a proper management channel which unites the entire music fraternity in one platform might definitely help. An artist and his/her work needs to be appreciated not just by word but also with proper pay scale and additional benefits. A union which decides such pay scales based on the artist’s experience needs to come up. In Western countries, this has been present since ages. But unfortunately in India, the arts is still considered to be a leisure time activity. The government, senior music teachers and music connoisseurs should come together for this massive task. When an artist is respected equally as a white collar employee, things will be bright for musicians for sure!

NC: Do you plan to come again for another eventful workshop to Hyderabad?

AA: Oh yes! I am planning to conduct more such workshops/masterclasses because there is great need for teachers to educate young minds about how to train themselves in becoming better artists. My sole aim is to train singers to be individually brilliant and shine in the world of arts.

NC: How was it performing with Shantanu Patel and associating with him for this workshop?

AA: It is a rarity to find people with a similar thought process and such talent and Shantanu is one of them. His impeccable teaching skills coupled with piano playing is something to admire for sure.