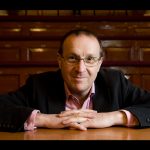 Nicholas Cleobury was Organ Scholar at Worcester College and Assistant Organist at Christ Church Oxford. He has an international reputation in the concert hall, opera house and recording studio. He was Artistic Director of Britten in Oxford 2013, is Founder and Conductor Laureate of the Britten Sinfonia, Principal Conductor of JAM (for contemporary choral music), Artistic Director of Mid Wales Opera, Principal Conductor of the Oxford Bach Choir and Founder and Principal Conductor of Sounds New. He is also a Trustee of Youth Music and the Schola Cantorum of Oxford. He has conducted most of the leading symphony and chamber orchestras of Great Britain, including the English Chamber, Hallé, London Mozart Players, London Philharmonic, London Symphony, Northern Sinfonia, Philharmonia, Royal Liverpool and Royal Philharmonic Orchestras, Royal Scottish National, Scottish Chamber, Ulster, and all the BBC Orchestras. European orchestras include Belgian National, Copenhagen Philharmonic and all major Danish orchestras, Czech Philharmonic, Gulbenkian, Lithuanian Chamber, Irish Chamber, Slovenian Radio, Stockholm Philharmonic, Tonhalle, and Trondheim Symphony, while further afield he has worked with orchestras in Hong Kong, Melbourne, Singapore and South Africa (Cape Philharmonic, Kwa Zulu Natal Orchestra/Durban and Johannesburg Philharmonic.) He has also appeared at festivals in Austria, Belgium, France, Poland, Spain and the USA and at many major British festivals, and often at the BBC Proms. He has conducted for numerous opera companies including Aldeburgh Festival, British Youth Opera, Canadian Opera, Chicago Opera Theater, English Bach Festival, English National Opera, Flanders, Glyndebourne, Gothenburg, Hamburg, Kent and Malmö Operas, Omaha Opera, Opera North, Opera 80, Stockholm and Welsh National Operas and extensively at Zurich Opera. He was Principal Conductor of the Royal Academy of Music Opera and Musical Director of Broomhill and has just completed a major UK tour of Jonathan Miller’s Carmen with Mid Wales Opera. He has worked extensively as a Choir Director, having been Assistant Director of the BBC Singers and has worked with choirs as diverse as the Swedish Radio Choir and Melbourne Chorale, Netherlands Chamber Choir and Huddersfield Choral Society, Berkshire Choral Festival (USA) and Soweto Township Choirs. He has given over 100 premieres, is a fervent champion of new music and has worked closely with many notable contemporary composers, such as Bennett, Boulez, Birtwistle, Henze, Ligeti, Macmillan, Maxwell Davies, Musgrave, Patterson, Ruders and Turnage and collaborated extensively with the late Sir Michael Tippett. He has conducted many leading specialist new music ensembles including Aquarius, Birmingham Contemporary Music Group, London Sinfonietta, Die Reihe (Vienna) and Opera Nova (Zurich) and contemporary groups at most of the major Music Colleges. In 1997 he founded Sounds New to bring contemporary music to a wider public. Actively involved in creative projects with student composers of all ages, he is also a vibrant and persuasive speaker and lecturer in demand as a communicator both on and off the rostrum. He also teaches conducting at Oxford, Cambridge, the RAM and RCS. A regular broadcaster with the BBC, Classic FM and on European radio, his discography includes highly regarded recordings of Mozart Concertos with the Britten Sinfonia and RPO, an award-winning CD of the music of Richard Strauss for EMI, Bridge, Headington, Maw and English Music with the Britten Sinfonia and Oxford Bach Choir, and many others including the Chopin Piano Concertos and a Spanish Fiesta with the RPO. 2014 he conducted Fidelio for Opera Omaha in 2015and Tarka the Otter for the 2 Moors Festival. He conducted the Portsmouth and Croydon Premieres of Dove’s For an Unknown Soldier in November 2014. What It takes to be a conductor