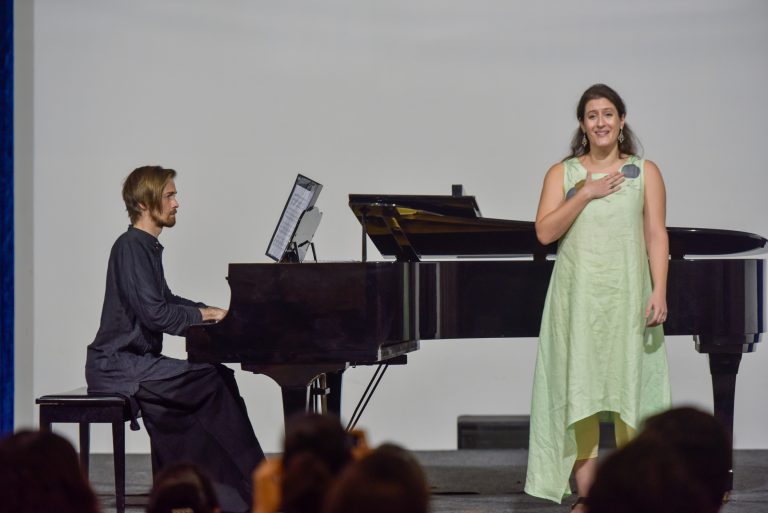 This year, KM Music Conservatory celebrates Western classical art song with the creation of a brand new festival. We aim to celebrate art song and bring it to new audiences in India, whilst simultaneously providing opportunities for students to learn from masters and see performances of the highest level.

The Art Song Festival 2020 opened with a launch event at KM on 11 January. Guest artists Patricia Rozario OBE and Mark Troop gave an opening concert alongside KM Academic Coordinator Adam Greig and myself. We performed a variety of songs and duets, including works by Liszt, Chausson, Schumann, Brahms, Britten and Tchaikovsky. The concert was followed by a public masterclass, in which Patricia and Mark worked on different songs with three duos of recent KM alumni. The main festival will take place between 16-19th April, and will feature concerts and masterclasses from visiting artists, plus a two-round competition for student duos. Art song is much-loved in the West, valued by audiences and performers alike for its wealth of repertoire and rich opportunities for storytelling. The two-hundred year old genre joins singer and pianist together in an equal partnership, communicating often intensely emotional stories through a synergy of music and poetry. Sometimes dramatic, sometimes intimate, art song gives performers a unique chance to speak directly to their audience on the concert platform, free from the distraction of stage and costume. It became so popular that many countries developed their own national styles, leaving us today with numerous songs in many languages. These songs are particularly beneficial to young singers as many are less technically demanding than opera arias, allowing students to develop without risking vocal damage. We want to inspire young musicians and new audiences by programming a range of events, particularly concerts from visiting artists. As a young musician training in Europe, I was lucky to be able to see many great performers in concert. I started to learn which songs I liked, which composers and poets spoke to me, and how I could combine them make an interesting concert programme. I saw what makes a singer a great communicator, and how a pianist can create different worlds by their touch. Through those experiences, we start to imagine the sort of artist we might want to become. We also want to educate through workshops and masterclasses. The latter, a common practice in the West, allow students to learn from established artists in a performance situation, and invite audiences to watch, involving them in the process of putting together a piece of music.

Finally, we want to give our students a firm goal, with the creation of a new competition for duos of singers and pianists. Not only does this inspire them to work hard, it also gives them a chance to perform in front of an audience and build a creative partnership which can last well into the future. For those who win a prize, they have an award to add to their CV, which helps them to stand out in today’s competitive music industry. India’s first art song festival hopes to leave you with a love of this music and the urge to discover more. All are welcome at the events in April, which will take place at KM Music Conservatory in Chennai. A detailed programme of the main festival events will be announced shortly.