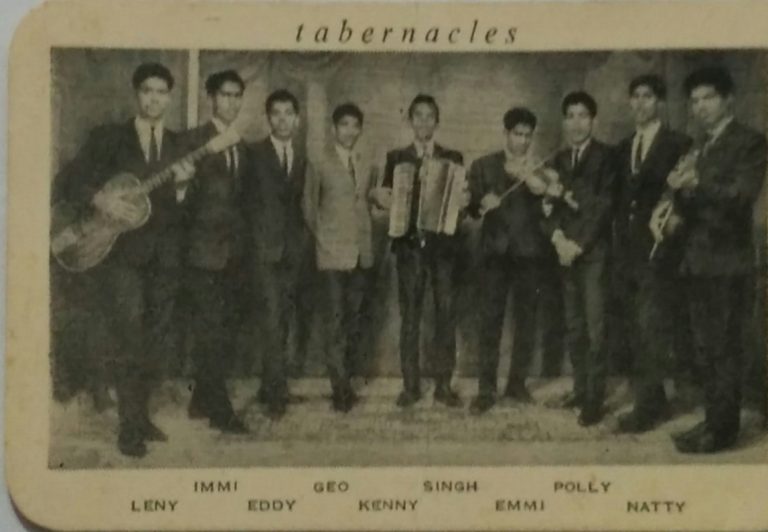 Music is one aspect which brings people together and keeps them bonded for long periods of time. Such bonding is not just materialistic but grows stronger as it emanates positive vibes throughout. What if such music also has a service aftermath? Tabernacles, a choral singing group from Secunderabad, has the best blend of all these factors. This group was formed in the year 1967 and will be celebrating its 50th anniversary this December! Another incredible aspect is that some of the founder members, Mr. Kenneth Gibson, Mrs. Jayanti S. Thangaraj, Rev. George Cornelius, Ms. Helen Cornelius and Mr. Immanuel Kanagaraj who were present in the group from its inception are still an active part of it! Here is an exclusive conversation with the members of Tabernacles.

Navya Chittarvu: Hello! it is such a pleasure to meet you all!

Tabernacles Choir: Thank you. The pleasure is ours, having you among us.

NC: How did this incredible choir association begin in the first place?

TC: Though the group officially had its first concert in 1967, the core group began in the year 1966. A group of nine boys came together to sing in four different sections namely: Bass, Tenor, Alto and Soprano. But when we were planning to sing a particular piece named Silent Night- we needed female singers to make it complete. With limited scope to bring in female singers then, we had to invite our family and extended family like sisters and cousins to join the choir. After registering the choir in the year 1967, our first performance happened on 2nd December welcoming the Yuletide season. We have been singing every first Saturday of December since then. This year co incidentally, our concert will be on 2nd December again, after 50 years.

NC: What were the prominent venues you were performing in since then?

TC: We were regularly performing in YMCA earlier but after gaining good popularity, we performed in prominent venues like Ravindra Bharati, Hari Hara Kala Bhavan and various churches all over the twin cities. We are proud to say that our performances always drew house full crowds!

NC: Do you have any preferences while choosing songs?

TC: We focus on Traditional church music but also choose the lesser explored genre like Negro Spirituals which has more of male choral arrangements. At the same time, we also take up Semi-Classical and Pure Classical numbers. Our idea is to perform the already popular compositions like Jingle Bells with revamped orchestral arrangements. We chose Hallelujah by George Frideric Handel, compositions and Anthems from Mozart’s 12th Mass and some pieces by Bach as well.

NC: How long do your concerts last typically?

TC: Our earlier concerts used to last two long hours with a break in between. But with the ongoing trend of fast track listening, we have reduced the time to one to one and a half hours. We don’t just focus on singing alone but also feature piano solos, piano-violin duets, and a chamber orchestra which includes first violin, viola, cello, double bass and a piano.

NC: Fifty years is a long time for a choir to stay together. What keeps you motivated to stick to it?

TC: It is all because of the patience, discipline and dedication of our Conductor, Mr. Kenneth Gibson. Many have left but the five of us (founder members) have always been here. Passion for music and presence of likeminded people was the biggest key. We invite new singers as well and take them after preliminary audition about their basic idea on music and choir singing.

NC: Just curious, but what does the name Tabernacles exactly mean?

TC: We contemplated a lot about naming our choir before zeroing in to this name. Tabernacle literally means the Tent on which the Glory of God rested. We wanted to be His dwelling place with His glory resting on us. Maybe that was the reason why we are able to continue together for such long time!

NC: How often does your choir meet for practice?

TC: We make it a point that we meet twice every week on Fridays and Sundays, throughout the year. This year the practice has been quite rigorous as a part of our 50th anniversary special concert and the many church concerts through the year.

NC: What is going to be the most special aspect of 50th anniversary concert?

TC: We will be performing few Christmas medleys to celebrate the cheer and also have picked up a few milestone compositions which made us popular all these years. We also selected a piece called Amen – which is quite complex in nature and the choir doesn’t usually attempt.

NC: Memorable moment for your choir performance in these fifty years?

TC: It is difficult to pinpoint one particular incident but once, we were invited to Sri Lanka during the 70s. People followed us from church to church, wherever we performed after the first show. We didn’t record anything by then but people were asking us about cassettes or recordings if any. It was the greatest compliment for us. We sang in Madras- which is the citadel of Music with knowledgeable people and got great response. We also sang in places like Medak and Trivandrum. We are invited to sing every year at the Christmas celebrations of the state government hosted by the Chief Minister. We were also invited to sing at the GSA World Divine Congress, an Inter Faith meet held in Hyderabad recently and were much applauded.

NC: How do you plan out Tabernacles from the choir after such a milestone?

TC: We are keen on bringing new voices in town to our choir who can take the legacy of choir singing forward. We are also planning to train young musicians who can be a part of our group, as till now, we were depending on established musicians. Our Organist, Mr. Zubin Christopher Gibson is an accomplished Musician and a Conductor himself and we hope we will continue the legacy.

NC: Any advice to younger musicians?

TC: Regularity, punctuality, practice and commitment are quite crucial not just for youngsters, but, any musician or singer.

The Motto of our group is ‘service through singing’. We collect an offering at our Annual Concert and donate the amount to the needy. We contribute the complete collection to Charitable Organizations that use the money for charity purposes.

NC: Okay. Thank you! It was a sheer pleasure meeting you all!

TC: Sure. The pleasure is ours!