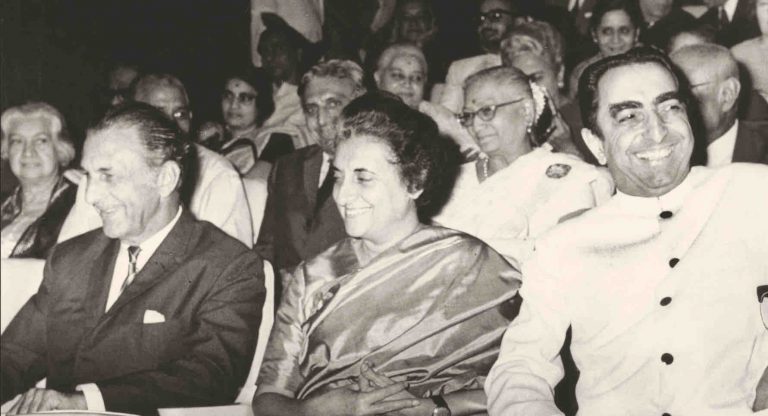 Dr. Jamshed Bhabha’s life was one filled with and dedicated to the arts. Fittingly, the NCPA has decided to have an annual lecture series on his birthday that focuses on art and culture. This year, we welcome Jawhar Sircar who will discuss what, according to him, ails the arts in India. By Akshaya Pillai

Dr. Jamshed J Bhabha was taken to the very end of Nariman Point when he approached the government of Maharashtra for land to construct a centre for performing arts. As a joke, he was shown the sea, and very candidly, he is said to have taken the offer. This is how Dr. Bhabha, who grew up idolising Ludwig van Beethoven and reciting lengthy Shakespeare verses, went on to build the National Centre for Performing Arts, one of India’s premier institutions to foster art and culture, all on land reclaimed from the sea.

A noted philanthropist and lover of opera, Dr. Bhabha is known to have detested microphones. He got the best architect and acoustician on board to build the Tata Theatre, and told them that every whisper should find its way even to the last row. In 1980, he invited the then-Prime Minister Indira Gandhi to inaugurate the theatre. On the opening night, after the performance of The Barber of Seville, her favourite Italian opera, she told Dr. Bhabha that this still does not qualify as an opera house. Dr. Bhabha, known for taking things in stride, immediately got down to building another opera house which is now called the Jamshed Bhabha Theatre.

It is here, decades later, on Dr. Bhabha’s birthday, that former civil servant, noted intellectual and public speaker, Jawhar Sircar will wield a mike, find a way to continue Dr. Bhabha’s legacy and contribution to the arts and deliver the first in a series of annual lectures on art and culture. Revered for his outstanding contribution to history and political thought, Sircar will deliver a speech on what ails the arts in India.

Sircar believes that the visual arts are thriving. “It’s a rich man’s paradise,” he tells me, his voice exhausted and strained after a 12-day lecture-cum-tour of central Asia. Instead, he wants to draw the limelight to the quadrangle of music, dance, theatre and performance art; delve deeply into the structure policies and discuss how India determined its cultural policies without much thought.

On his journey to Moscow on the Prime Minister’s private plane along with five senior secretaries in December 2009, he recalls how the team kept discussing serious matters of the state, but on the way back from Moscow they all resorted to the same topic: Bollywood. It was the foreign secretary who mentioned how her Russian driver had spoken about Raj Kapoor and Mera Naam Joker. This was followed by accounts wherein they realised what Russia really remembers is Bollywood. “This is what lasts between countries. Time marinates these cultural associations. And India will forever be the land of heroes and songs,” he says.

And it is in such a country, in the year 1952 that B.V. Keskar, the minister of information and broadcasting (I&B) of newly independent India, who was at the helm of All India Radio, decided to ban all film songs. Keskar had decided that the information and entertainment lifeline of the nation would not air Bollywood songs as he thought of them as vulgar and westernised, and hoped instead that his country would begin to appreciate highbrow classical music. This is when Binaca Geetmala came up as a metaphor of revolt. The legendary musical countdown would air on Radio Ceylon, a show entirely dedicated to Indian film songs hosted by the ever charming Ameen Sayani. “Even Western classical music was edged out. I know of an unverified correspondence between Nehru and Keskar wherein the latter refused to play Western classical music calling it colonial, and Nehru retorted, “Do you doubt my patriotism?”” It is anecdotes like these that Sircar has planned to reminisce through his lecture.

Sircar will also talk about rebellions that helped form the texture of arts in India, and of iconic aberrations that changed the social milieu of dance. He will take us back to 1933, when Muthulakshmi Reddy had piloted a bill that banned the practice of dance in the temples, and yet, in times like that, a Brahmin girl dared to learn dance from a devadasi. Not only did this girl learn Bharatanatyam, then called Sadir, she also performed it in public during the Diamond Jubilee Convention of The Theosophical Society in December 1935.

“That woman was Rukmini Arundale. It is said many Brahmins walked out during the event. Dance in India had been exploitative in form. And most of the times, the lower caste performers were cornered, exploited and this was a type of sanitisation that happened. This is something I want to spend time on, the brahminisation of dance forms like Bharatanatyam and Mohiniattam, how this led to the evolution of the current costumes. For instance, Manipuri dancers used to wear a Ghaghara traditionally.”

Sircar has written over 100 articles on various cultural aspects of India, and to him, this lecture is a comprehensive 300-, if not a 360-degree overview of his career-long efforts. “Normally people would have a short span of attention, but here at the NCPA, I believe I will be blessed with the ideal audience for this topic,” he says when asked why he chose to talk about what ails the arts in India.

The Antiquities Act and the plight of Government-run museums is another subject he wants to explore during the talk.

“India doesn’t preserve culturally. We don’t know the art of preserving the dead. We consider even the clothes of the dead impure. This is why our people can’t run a good museum, and places like the Victoria Memorial often end up being called a Bhoot Ghar.”

Sircar has always been vocal about the lack of control the broadcasters have on the news they present, and the government interference in it. He is synonymous with his bold stand on autonomy and, in his lecture, he will also be shedding light on the pros and cons of trusteeship, inventory problems and how he thinks that it is high time for corporates to walk the talk.

The legacy lives on

Insisting he is too practical to be a poet, Sircar says this is precisely why he has deep respect and admiration for Dr. Bhabha.

“Though I have never met the genius himself, I have organised his exhibition in the National Gallery of Modern Art, and I have been baffled at his capability to move from the finiteness of numbers to the complete randomness of nature. His abstract paintings stunned me and then I discovered his charcoal paintings which were a masterpiece in accuracy. Like C.V. Raman says, Dr. Bhabha was truly the modern equivalent of Leonardo da Vinci.”

It is a commonly shared story that when a fire destroyed five years’ worth of construction of his dream project, all Dr. Bhabha had to say was: ‘Tomorrow we begin again.’ It is this degree of resolution and resilience that would perhaps need to be adapted to rescue all that ails the arts in India.