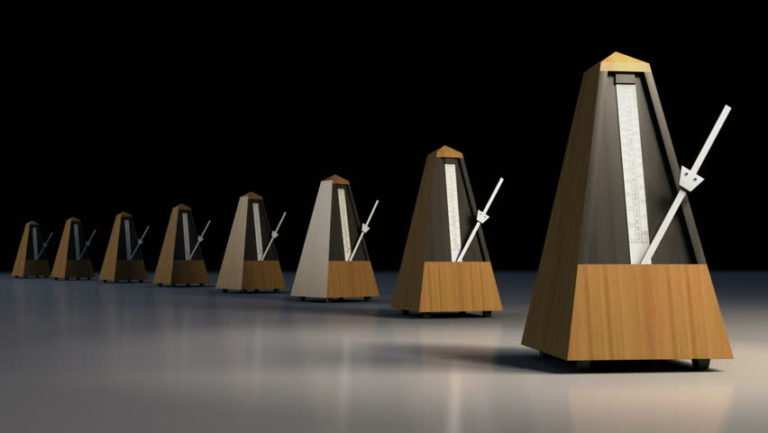 A long time ago, a smart voice teacher once said, “the most important thing in music is rhythm.” That statement still rings true; the elements of music, like a melody that moves people, and lyrics that mean something, are held together with rhythm. It’s the same thing in speech; without the rhythm of a language, it can be really hard to draw meaning from a string of words (it’s why we hear foreign accents in our native language).

And yet, rhythm is often the most difficult thing for musicians to master. Any pianist who has gone from solo playing to collaborating with a chamber ensemble, knows this. For those of you who have toiled with a metronome, and felt those beat subdivisions deep in your gut, it can be totally horrifying to hear something like this:


Hear that shrinking distance between T, G, I, and F? That’s amateur rhythm, right there. We don’t have any beef with Katy Perry, or her chorus. But man, it’s irritating, isn’t it?

Actually, this kind of musical pattern is one of the hardest to keep in time, especially for a group of people. It’s similar to the chorus part of the “Brindisi” in Act I of La traviata, or even the Anvil Chorus in Il trovatore. Even great choruses can fall into the traps that lie in the rests between the notes.

Here’s another example of rhythm that may make your blood boil, thanks to one of our favourite bands, The Kinks:


It happens a few times during “Everybody’s Gonna Be Happy,” but we cued this video up to the most obvious display of clappers gone wild. There’s a happy group of folks clapping along in the choruses of this song, and every time they get to shine, they get faster and faster. They end up so ahead of the beat that it’s like the rhythmic equivalent of lapping someone in a running race (except there’s no medal).

And what happens when you’re at the mercy of an entire audience of enthusiastic clappers that you didn’t even hire? One must be like a rock, the way Barney McKenna of The Dubliners was during his banjo solo:


Gah. To be fair, Barney does pull the whole long-game accelerando bit.

To be clear, readers, this bit of grumbling isn’t meant to say, “look how bad the average person’s rhythm is!” It’s truly an impressive feat to master the art of keeping a beat. It’s a skill that makes a stellar beat-boxer, and adds to the value of a great drummer.


So, we’ll finish with some ear bleach of sorts, wrapped up in one of our favourite dance-worthy tunes (and kind of an adorable music video) by the Gypsy Kings: