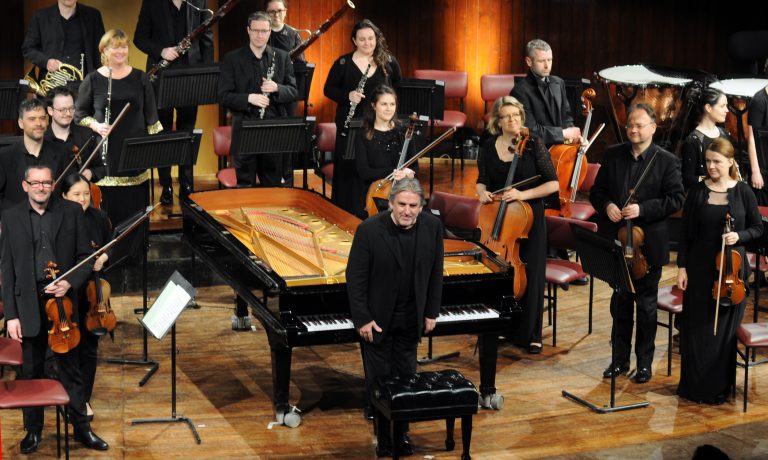 On 24th and 25th April 2018, Tata Theatre audiences at the National Centre for the Performing Arts, Mumbai had the distinct and rare opportunity of hearing not one nor two but all five piano concertos by Beethoven. We have to thank the NCPA who regularly partners with touring foreign orchestras to present us with a wide variety of symphonic fare in addition to the two Symphony Orchestra of India seasons every year. We have also to thank Camerata Ireland’s global sponsor Randox pharmaceuticals and its supporters Culture Ireland and Arts Council of Northern Ireland for this rare and once in a life time chance.

On day one we were treated to concertos I, II and IV starting quite rightly with the second which was actually the first to be composed. This has Beethoven at his most Haydnesque while still under the influence of his teacher the senior composer. With the opening springy B flat major downward triad we knew immediately of the orchestra’s enthusiasm and alertness. The strings may not have the sheen of similar central European ensembles like the Salzburg Mozarteum but the piquancy of brass and winds more than made up for that lack. Directed with extreme vigour and virtuosity from the piano by Barry Douglas the semi-quaver runs in the piano were occasionally rushed in what I can only explain by an enthusiastic adrenaline pump. But who can blame the musicians for the excitement of the moment playing to a jam packed Tata Theatre in the height of summer in Mumbai. This had all settled down by the time we got to the singing cantilena of the slow movement. The boisterous Rondo finale (Molto allegro) with its syncopated 6/8 was lively and jocular, delivered with panache. The last double trill was despatched gracefully and the movement brought the concerto to a rousing end.

Still to come in the first half of this long evening was the first piano concerto chronologically the second. Written when Beethoven was still in his early to mid-twenties contemporary to the first piano sonatas. Here too are the influences of Haydn and Mozart specially the latter’s C major so called “Emperor” concerto. The first movement exposition was resolute and lyrical at the same time, the remote key development was hushed and tranquil and the recapitulation (inspite of a fudged glissando scalic return) may have benefitted from more light and shade.

After the interval came the very contrasted and ingenious fourth concerto. The very opening instead of the expected rousing tutti commences with slow, solemn unaccompanied G major piano chords marked dolce. Then the orchestra comes in in the remote key of B major equally hushed in the beginning. This movement is full of such compelling invention that make this in my opinion the most interesting of Beethoven’s five concertos. The second movement is also unique in that it is wholly programmatic in character. It reflects the journey of Orpheus in Hades so often the subject of many an opera before and after. There is a continuous dialogue between piano and orchestra with rising and falling away of short phrases. This movement in the relative minor key of E minor was played strongly with bold dynamic contrasts and refulgence of tone. This led to a spirited and jocular third movement with its playful first subject enunciated again by solo piano. Thus the evening ended on a happy note as Mumbai’s music loving denizens left the NCPA precinct in eager anticipation of the next evening.

The third and fifth concertos were paired together on the second day. The C minor(no 3) was clearly Beethoven striking out in his own original style after the early two concertos which were more redolent of the classical period. Here his piano writing is truly marvellous with rapid passage work and lyrical contrasts. The E major second movement was full of light and shade where as the last movement with its naughty rhythmic theme was played with boisterous energy.

And what can one say of the interpretation of the crowning glory of this cycle, the Emperor, one is used to hearing it played by a symphony orchestra of a size twice that of this group. But the inner detail and closer interaction that resulted from more economic resources was our gain.

I had travelled to Pune the previous Saturday to hear Barry Douglas in recital. There he displayed his gargantuan command of the piano displaying a breadth of piano virtuosity that was nothing short of miraculous. He played on that occasion purely programmatic music from the romantic Russian repertoire. I wondered how he would get on with more absolute music like Beethoven. On the evidence of these two evenings in Mumbai he acquitted himself admirably. On both occasions he showed great respect for fidelity to the score never indulging in effects for their own sake yet managing to be interesting and imaginative. Quite an amazing feat of memory and technical prowess! Those who of you who missed hearing him live will be happy to know that he records exclusively for Chandos and many of his recordings including the five Beethoven concertos are available through Amazon. A pianist to remember.