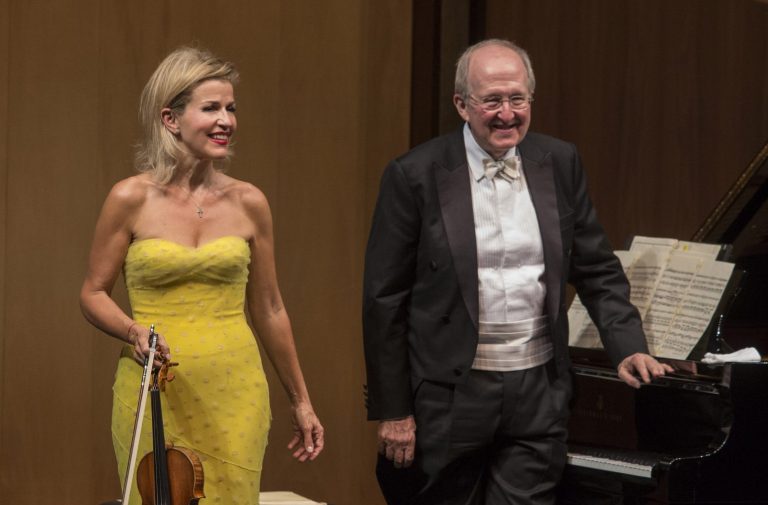 It is not often that Anne-Sophie Mutter appears anywhere in recital. But here she is on my fourth day at the festival in recital with her long time accompanist Lambert Orkis. From start to finish it was clearly proving to be one of the most outstanding concerts of the festival. The first work was “Clockwork” for violin and piano by 1959 born Sebastian Currier. This work was premiered in 1989 and has four sections as under. Lifeless–Turbulent-Searching–Restless. Although it is contemporary in form it is extremely approachable music and I enjoyed listening to it greatly.

This piece was followed by Mozart’s late violin sonata in A major K 526, the third of the three great Vienna sonatas written between 1784 and 1787. The Molto Allegro main theme of the first movement was introduced by the piano with the violin shadowing it a third or sixth below. Outstanding among the wealth of tunes for material the second subject is awarded to the violin which has an equal share in both the bravura and the exchange of thematic ideas in the subsequent development.

The serenely thoughtful melody introduced in octaves and even quavers by the piano at the beginning of the Andante is to echo through much of the slow movement, often in short phrases and sometimes with the pianist’s right hand half a beat behind the left. It is a theme perfectly conceived for close contrapuntal relationship between the two instruments.

In the breath-taking adventurous finale with its lively Presto theme taken here at wreck-less pace by the two instruments ending the first half of the programme.

Ravel’s first violin sonata is the more appealing of the two. He started writing it in 1923 completing it in 1927 and gave its first performance with George Enescu and Ravel himself at the Salle Erard in Paris. The opening Allegretto, a fluently melodious pastorale is an inspired re-thinking of sonata form. The second movement called “Blues” is idiomatically highly sophisticated so much so that the main theme anticipates Gershwin’s “Summer time”. Opening with a pizzicato imitation of the banjo, this movement faithfully incorporates many of the characteristic of jazz at the time. The closing “Perpetuum mobile” replaces an earlier an apparently ravishing finale which the composer discarded. The new last movement is exciting rather than ravishing with a continuous two hundred bars of violin semi quavers accompanied by a jazzy theme on the piano reminiscent of “Fascinatin’s rhythm” from Gershwin’s musical Lady be Good!

Poulenc had a disliking for the violin as a solo instrument which he described as a prima donna. He dedicated the violin sonata to Federico Garcia Lorca’s memory who was murdered in 1936 by Franco. The sonata is a bravura work in which both instrumentalists have much technical and melodic opportunities. The first movement has recollections of Stravinsky and Franck. There is also a direct quotation from Tatyana’s letter scene from Tchaikovsky’s Eugene Onegin. The second movement intermezzo is the only one overt reference to Spain. There is an allusion to a popular dance rhythm in the piano and both instruments sometimes suggest a strummed guitar chord.

The catastrophe implied by the tempo heading of the last movement, “Presto tragic”, does not happen until near the end. The beginning is violent enough but, once again, Poulenc’s lyrical impulse intervenes-together with his taste for the cafe-concert at one point-which makes the tragedy all the more unexpected when it strikes, dropping from the top to the bottom of the keyboard with a heavily discordant thump.

The rest of the programme was all fireworks and bonbon. Saint-Saens tour de force the Rondo capriccioso in  A minor op. 28 was executed with great polish and elan. The technical virtuosity that sprang forth from Mutter’s violin was exuberant and exact with Lambert Orkis providing excellent orchestral support. Two encores providing a fitting conclusion to an evening of high quality chamber music. More like these please!